Boston Globe: We Need Jimmy Stewart to Save Us From ‘Idiot-in-Chief’ Trump 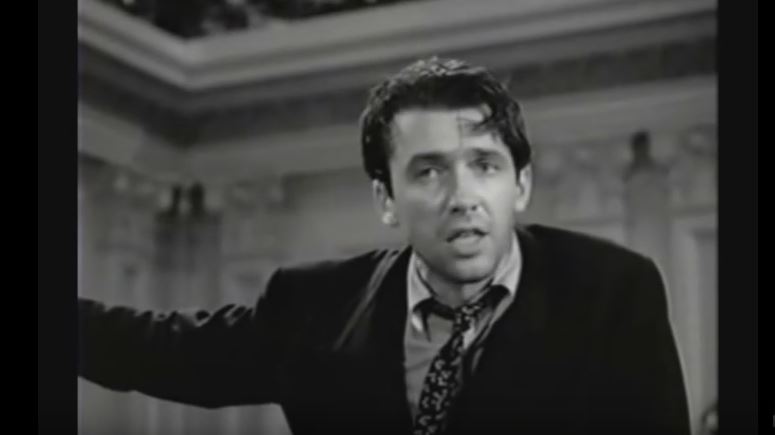 A liberal Boston Globe columnist is beside himself over the supposed evil and corruption of  Donald Trump. So, the only person who can save America from the “idiot-in-chief” is... Jimmy Stewart? More precisely, Stewart’s iconic role as the noble citizen politician in Mr. Smith Goes to Washington. It’s ironic that the Globe is pining for honesty and reliability, given the paper’s front page fake news in 2016.

Journalist Ty Burr on Friday wondered, “Where’s our Jimmy Stewart?” Burr fumed, “I’ve been wondering where that guy is as the house built atop that foundation seems in danger of burning to the ground and the alarms in the firehouse seem awfully slow to ring. We have elected an Idiot in Chief — this is not bias, this is fact.”

It’s a “fact” that Trump is an idiot? This is the loose grasp of reality that the Boston Globe demonstrated on April 9, 2016. The paper imagined a Trump presidency (then one year in the future) with fake headlines such as these: “U.S. soldiers refuse orders to kill ISIS families.”  Another worried about “riots continuing” as “curfews extended in multiple cities.”

Burr pined for a real-life version of Mr. Smith’s cinematic conclusion, the part where Stewart’s character took on corrupt Washington:

You remember the climactic scene of Mr. Smith Goes to Washington, don’t you? The earnest young senator has had his eyes opened to the day-to-day corruption of Washington — the favors that get traded, the bribes that get paid — and, before he can talk, the powers that be frame him for graft. Smith filibusters in an effort to save his skin, reads from the US Constitution, the Declaration of Independence, and the Bible until he’s hoarse. He’s practically a Christ figure on the cross of our cynicism, but he knows he’s right. His conviction is what saves him, and us.

So, yes, the ground finally seems to be shifting away from Trump, but only as an act of reluctant groupthink on the part of the majority Republicans. There’s an opening for a hero here and no one seems interested in the job. Where’s our Jefferson Smith to voice our communal outrage and to remind us all how very, very far we’ve come from our hard-won ideals of governance?

If the jungle drums pick up their pace and impeachment becomes a legitimate possibility, it will be interesting — and not a little nauseating — to see which rats jump off the Good Ship Donald and when. The entire political year of 2017 has been a study in moral cowardice, with people who should know better abandoning their constituents, their principles, and the health of their democracy as long as they know Trump is in charge and they can advance their agendas.

Doesn’t any one of them want to come clean?

Who could replace Mr. Smith’s genuine ideals? Burr has an idea. And they’re all a bunch of liberal Democrats:

New York Senator Kirsten Gillibrand, Massachusetts Senator Elizabeth Warren, California Representative Maxine Waters. Ms. Smith has come to Washington, but she has yet to capture the public imagination on a mass scale.

Not to ruin the metaphor, but Stewart and the film’s director, Frank Capra, were both conservative Republicans. But maybe the Globe isn’t the place to go for film advice. In 2005, Burr called a forgettable action movie a “delusional” “obscenity” because it portrayed the American military positively:

"Stealth is a pretty fair military-hardware action movie until you start thinking about it — at which point it turns incredibly sour in your mouth. I can therefore recommend it to any and all audiences lacking higher brain functions. Sea cucumbers, perhaps. Ones waving American flags.... This is exactly the sort of movie we don’t need right now: a delusional military fantasy in which collateral damage doesn’t exist....For a movie to pretend, in the face of the deaths of tens of thousands of Iraqi men, women, and children directly or indirectly caused by our presence there, that we can wage war without anyone really getting hurt isn’t naive, or wishful thinking, or a jim-dandy way to spend a Saturday night at the movies. It’s an obscenity."
— Boston Globe movie critic Ty Burr in a July 29, 2005 review of the movie Stealth, about a fighter jet that is piloted by a computer with artificial intelligence.