When it comes to the Clintons, the hosts of CBS This Morning are indistinguishable from the gushing celebrity “journalists” at Access Hollywood. They are devotees. On Tuesday, the most pressing question for these partisan fan boys (and fan girls) is whether Chelsea Clinton or her mom will run for office in the future.

The bombshell involving Susan Rice unmasking Trump associates? Hillary Clinton’s private e-mail server? These things didn’t come up in the ten minute interview. Instead, Charlie Rose breathlessly wondered, “The question everybody wants to know, how is your mother?” He added, “Do you think [your mom] will run for public office again?” 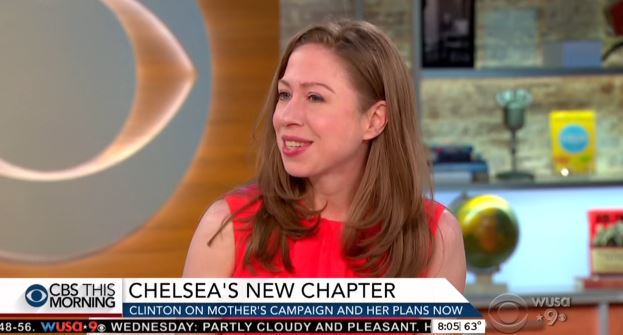 Later, Rose and the others again encouraged the younger Clinton to run for office:

It's an interesting time for the Democratic Party though, because they have to look to new leadership and people who are prepared not only to run for elective office but to be part of building the party back at the local, state and national level.

He teased, "There's a possibility that politics is in your DNA."

On Wednesday, Ivanka Trump will be on CBS This Morning. Do you think her questions will be as easy? Tune in tomorrow for the contrast.

A transcript of the questions can be found below: 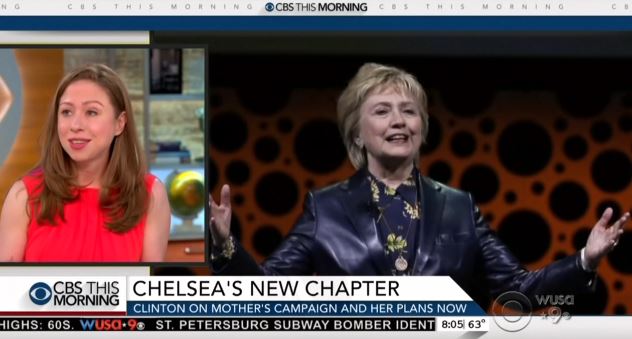 CHARLIE ROSE: Chelsea Clinton was a key campaign figure when her mother ran for president last year and even before that. She's a vice chair of the Clinton Foundation and an adjunct assistant professor at Columbia University Mailman School of Public Health. She's here for an interview you will see only on CBS This Morning. Her best selling book It’s Your World: Get Informed, Get Inspired and Get Going is now available in paperback. Chelsea, welcome.

CHELSEA CLINTON: Thank you so much, Charlie.

ROSE: Great to see you.

CLINTON: I'm happy to be here.

ROSE: What do you hope to accomplish with this book?

CLINTON: I hope that this book helps inspire kids who are already engaged in the world to think about what they can do translate that interest and engagement to real action.
...

GAYLE KING: Last time you were here, you called it a call to action, actually. Are you finding kids of all ages really do want to get involved?

KING: You were going to say something.

ROSE: Well, I was going to say, knowing this book, and good for you, the question everybody wants to know, how is your mother?

CLINTON: She's great. I saw her this weekend.

ROSE: Do you think she will run for public office again?

CLINTON: I have no idea. I don’t think so.

NORAH O’DONNELL: I know when she spoke in Scranton for St. Patrick's Day, though, she said “I'm ready to come out of the woods. What did that mean?”

ROSE: Are you running for what?

ROSE: Your Twitter account you are using it more than in the past. Do you expect to use that in terms of, as a way to is this where you disagree with President Trump?

O’DONNELL: We're in the midst of a debate about whether Russia tried to influence the election. And we've heard from former CIA directors, we've heard from former vice presidents who say this is the most sophisticated campaign ever that they've seen by Russia to try to influence the election and potential administration or the current administration during the campaign. What do you think about what Russia did during the campaign?

O’DONNELL: Do you think they had any role in your mother's defeat, Russian influence?

CLINTON: I think we don't yet know the answer to anything around Russia and I think we all deserve those answers.

ROSE: So, why do you think your mother lost the election that many people thought she would win?

CLINTON: Clearly I worked very hard for that goal.

ROSE: And so did your father.

CLINTON: I'm deeply biased towards my mom. I'm as proud of her today --

ROSE: So therefore, you have a strong reason to want to know.

ROSE: It's an interesting time for the Democratic Party though, because they have to look to new leadership and people who are prepared not only to run for elective office but to be part of building the party back at the local, state and national level.

CLINTON: I'm really grateful, you know, here in New York City we have some fantastic dynamic Democrats who are doing just that.

ROSE: There's a possibility that politics is in your DNA.

CLINTON: Well I hope politics is in all of our DNA. And I actually mean that deeply. I think, again getting involved —

KING: But your DNA is different, Chelsea.