German Journalist to Trump: 'Why Are You So Scared of Diversity?'

Hostile journalists sparred with Donald Trump on Friday at a press conference, wondering why he was “scared” of “diversity” in the media and if German Chancellor Angela Merkel has “reservations” about the President. Kristina Dunz of the DPA German Press Agency labeled Trump an “isolationist” and disrespectful to the European Union. She then lectured, “Why are you scared of diversity in the news, in the media? That you speak so often of fake news? And that things, after all, in the end cannot be proven?”

After rejecting the “isolationist” tag, the Republican retorted, “I don't know what newspaper you are reading. But I guess that would be another example of, as you say, fake news.” Later, Angsar Graw of Die Welt brought up White House claims of “alleged wiretapping on you, on Trump Tower, on Trump organization.”

Bringing up past wiretapping of Merkel by Barack Obama, Trump motioned to his counterpart and zinged “As far as wiretapping, I guess this past administration —  at least we have something in common, perhaps.” 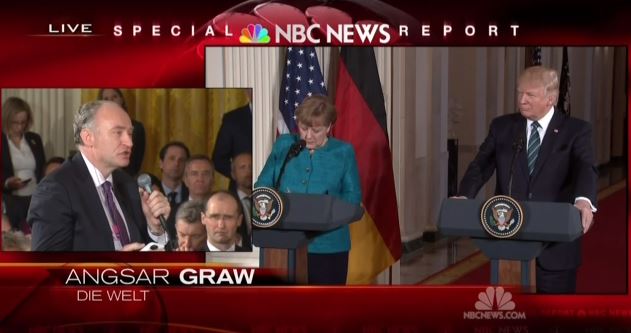 Finally, Mark Halperin of NBC News encouraged the German Chancellor to insult Trump: “President Trump has got a different style than most recent past presidents. I'm wondering what you think of that style? If  you think it's good for the world or if you have got any reservations?”

In January, a BBC journalist at a press conference told the President that his “alarming beliefs” worry the British. In February, Trump skipped the networks at a press conference with the Japanese prime minister. He did the same thing a few days later after meeting with Canada’s Prime Minister.

A transcript of the questions is below: 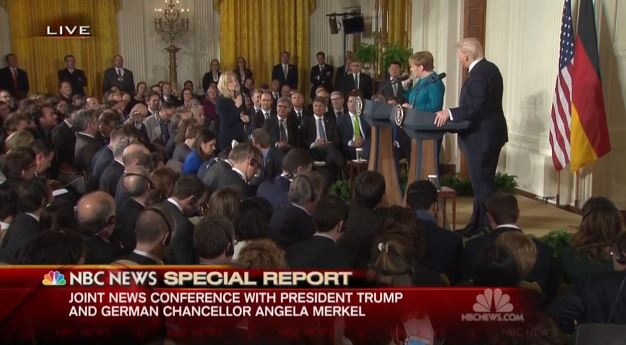 MARK HALPERIN: [Audio is bad] Mr. President, thank you. A lot of Americans now have — [audio cuts out] like eight years ago, as the government debates what do about health care what — So, I’m wondering if you can tell people what your bottom lines are.  What's nonnegotiable? What’s non-negiotiable. You talked in the past that no one should be denied health care if they can’t afford it. You talked about —

GERMAN TRANSLATOR: The gentleman needs to use a microphone.

HALPERIN: — Are those parts of your bottom line? Would you veto any piece of legislation that violated that? Madame Chancellor, back to you. President Trump has got a different style than most recent past presidents. I’m wondering what you think of that style? If  you think it’s good for the world or if you have got any reservations? 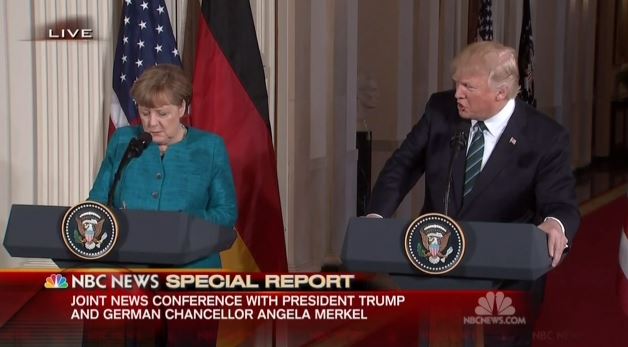 KRISTINA DUNZ (DPA German Press Agency): Madam Chancellor, given the experience of the GDR, you are always saying that you are so confident that walls can fall also. But how dangerous do you think this isolationist policy of the U.S. president is, what with the import tariffs that he plans and also with the fact he doesn't think the EU —  doesn't deal with the EU in a very respectful way? Mr. President, America First? Don't you think this is going to weaken also the European Union? And why are you scared of diversity in the news, in the media? That you speak so often of fake news? And that things, after all, in the end cannot be proven? For example, that you have been wire tapped by Mr. Obama.

DONALD TRUMP: Should I go first? Nice friendly reporter. First I all, I don't believe in an isolationist policy. But I also believe a policy of trade should be a fair policy. And the United States has been treated very, very unfairly by many countries over the years. That's going to stop. I'm not an isolationist.

TRUMP: I don’t what newspaper you are reading. But I guess that would be another example of, as you say, fake news.

ANGSAR GRAW (Die Welt): Madam chancellor, a question addressed to you. Today, we're talking about trade. The President in the past always said that he doesn't like multilateral trade agreements but preferred bilateral trade agreements. Do you think it is bilateral? Do you think from the EU’s perspective, TPP is a bilateral agreement with Washington on one side and the EU on the other side? Is the problem that America, the president of the United States and the Europeans have a basically different understanding of what the EU is all about? That's my question addressed to you.

Mr. President, my question addressed to you, if I may — [switches from translator to English] — rejected White House claims that the alleged wiretapping on you, on Trump Tower, on Trump organization or members of your campaign was —  that British intelligence was either responsible for it or involved in it. After these claims are rejected, what is your take on that? Are there other suspects or do you think it was a mistake to blame British intelligence for this? And, by the way, my second question, are there, from time to time, tweets that you regret?

GRAW: Very seldom. So, you would never wish —

TRUMP: Probably wouldn’t be here right now, but very seldom.  We have a tremendous group of people that listen and I can get around the media when the media doesn't tell the truth. So, I like that. As far as wiretapping, I guess, this past administration [Motions to Merkel] —  at least we have something in common, perhaps.