With Obama Safely Gone, WashPost Is Now Ready to Speak Truth to Power

Washington Post political reporter Ed O’Keefe appeared on CBS This Morning on Friday to lobby for more investigations into Jeff Sessions and Donald Trump’s ties to Russia. With a Republican in the White House, the Post suddenly has a lot of questions. Co-host Norah O’Donnell set up the curiosity by wondering, “If there was nothing improper or nefarious about these meetings [with Russian officials], why, perhaps, the effort to conceal them?”

O’Keefe lobbied, “That’s what we want to know, frankly.” He then suggested that, if only, Trump would give a little on Russia details, the whole thing might die down: “If they want to move on to changing the health care laws, revamping the tax system, getting a Supreme Court nominee with no problems, that they would try to get this out as quickly as possible.”

O’Keefe spoke for the aims of journalists: “I think we in the press and certain others, want to know why else were people talking to [Russia] during the campaign?” Co-host Gayle King and the Post writer speculated about Jeff Sessions’s motives: 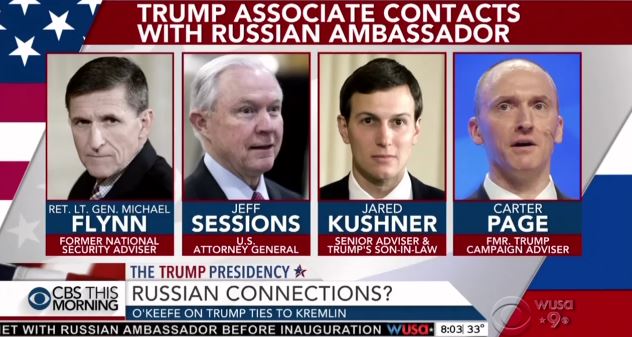 GAYLE KING: And when you talk about Mr. Sessions, was it a lie or was it just an omission?

ED O'KEEFE: Well, yesterday he seemed to suggest it was an omission. But I think that's why  these questions continue to sit there unanswered.

Journalists having questions and speaking truth to power is a good thing. But the Washington Post has selective interest when it comes to outrage and being alert. In late February, the paper added a motto to its home page and the front page of the print edition: “Democracy dies in darkness.” 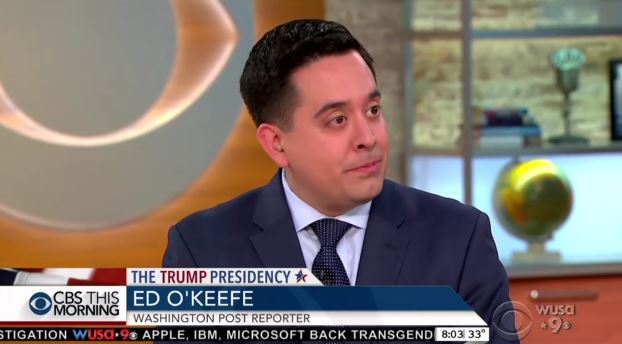 Apparently, during the eight years of the Obama administration, democracy faced no threats. Here’s some examples of the front page “investigations” into the last president:

“Between workouts during his Hawaii vacation this week, he was photographed looking like the paradigm of a new kind of presidential fitness, one geared less toward preventing heart attacks than winning swimsuit competitions. The sun glinted off chiseled pectorals sculpted during four weightlifting sessions each week, and a body toned by regular treadmill runs and basketball games.”
— Washington Post reporter Eli Saslow in a December 25, 2008 front-page story about Obama’s vacation fitness regimen.

“People who brief him say he is able to game out scenarios before the experts in the room, even on foreign policy, national security and other issues in which he had relatively little expertise before running for president. Obama is approaching the issues as a game of ‘three-dimensional chess,’ said John O. Brennan, an assistant to the President for homeland security and counterterrorism. ‘It’s not kinetic checkers....There are moves that are made on the chess board that really have implications, so the President is always looking at those dimensions of it.’”
— Carrie Johnson and Anne E. Kornblut in a front-page Washington Post story, August 28, 2009.

And, of course, the Post has never endorsed a Republican for President.

A partial transcript of the CBS This Morning segment is below:

ED O’KEEFE: That's what we want to know, frankly. You would think if they want to move on to changing the health care laws, revamping the tax system, getting a Supreme Court nominee with no problems, that they would try to get this out as quickly as possible. Instead, it’s been dripping, dripping, dripping almost every single day of this administration.

ANTHONY MASON: And what are the key questions here, Ed?

O’KEEFE: I think we want to know what exactly he was discussing with the Russian ambassador back at the convention and in September in his private meeting. Part of the reason is because he was a member of the Senate Armed Services Committee. So, he might have met regularly with foreign defense officials, military officials. But why would he be meeting with an ambassador? That’s usually reserved just for members of the Foreign Relations and the Intelligence Committees. And you know, given that everything that was going on and reports were surfacing about interference around that time, that’s what raises questions. And we want to know, I think we in the press and certain others, want to know why else were people talking to them during the campaign? During the transition, that makes a little more sense. They were reaching out to a lot of other foreign governments and entities at that point. But during the campaign, especially around the time when he was a prominent surrogate, one wonders what was going on.

GAYLE KING: And when you talk about Mr. Sessions, was it a lie or was it just an omission?

O’KEEFE: Well, yesterday he seemed to suggest it was an omission. But I think that’s why  these questions continue to sit there unanswered. What were they discussing? Why did they feel the need, especially when so many other senators said they’d had no contact at all that year with the Russian ambassador.

KING: What does it say to you that several Republicans are also breaking ranks and saying, “Listen, we got to— ”

O’KEEFE: That said everything. While he may have been getting legal advice at the Justice Department that he had to recuse himself, the senator who introduced him to the committee, formally, that other senators from key swing states and that a bunch of vulnerable members of the House, who may face tough reelections next year because of the president’s unpopularity very quickly came out and said, “Fix this.”