The journalists at CBS This Morning on Monday hyperventilated over conflicting rulings on Donald Trump’s travel ban, insisting that it’s a growing“constitutional crisis.”  At first, legal expert Rikki Klieman simply explained the normal process the travel ban would follow through the courts: “It is definitely going to the Supreme Court. Whoever is going to lose here, whichever side, you could have the three-judge panel deciding one way or the other. Then you may go to the whole circuit.”

(As for the politics of CBS’s legal analyst, she donated $1500 to John Kerry in 2004.) O’Donnell saw the “constitutional crisis” as a potential lesson for Trump:

You see now the White House chief of staff Reince Priebus saying we got to have to have a checklist [of decision making process] now. Because a quick decision like this, if you don't consult, could end up being, not only far-reaching, but embarrassing for the executive. 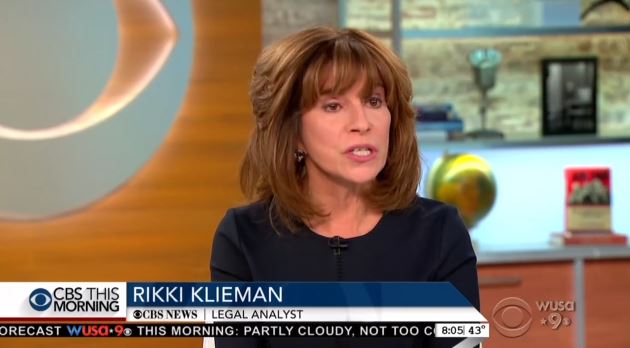 Earlier in the show, Jan Crawford offered a mostly one-sided report in which she relied heavily on administration critics:

Several other entities filed legal challenges overnight, including the American Civil Liberties Union. A brief filed by the Souther Poverty Law Center says, “The government is forbidden to discriminate against Muslims and it's forbidden to endorse or disfavor one religion as compared to others. The executive order does all of this and more.” The administration says the ban is required to keep terrorists out.

She eventually got around to playing a clip of Vice President Mike Pence predicting, "I truly do believe as we go forward, we'll see the legal foundation of that affirmed by our highest courts."

A transcript of the Rikki Klieman interview is below: 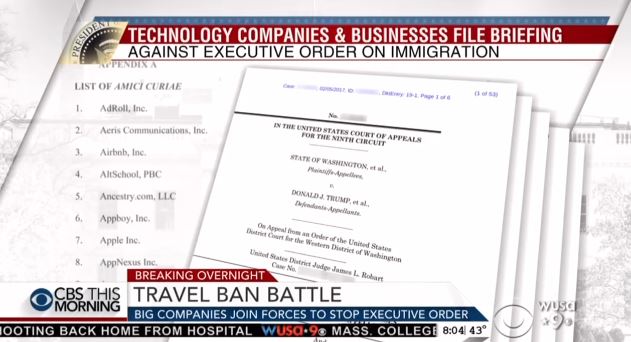 NORAH O’DONNELL: President Trump lashed out at the judge who issued the restraining order blocking the travel ban. He tweeted “Just cannot believe the judge would put our country in such peril. If something happens, blame him and the court system.”

ROSE: What's likely to happen as this winds its way up the appeals court?

KLIEMAN: This is going to be a really quick schedule. Right now you have a three-judge panel. Each circuit gets a three-judge emergency panel. This is the panel for February. They are going to get these briefs today. They could decide as early as later today or tomorrow. They do not need to schedule a hearing. So are they going to extend this temporary restraining order and make it into what we call a preliminary injunction or are they going to say no, we don't need a temporary restraining order here and that the judge who decided it was wrong?

KLIEMAN: What you have here is what we call a differentiation between the circuits. So you've got a federal court in Washington.

KING: Is that what we have here?

KLIEMAN: That's what we have. And you have a federal court in Washington, which is now in the Ninth Circuit in San Francisco. By the way, the Ninth Circuit known as one of the more liberal circuits in the country versus a federal judge in Boston. Usually we have what we call come comity, that is c-o-m-i-t-y. That is that judges will accommodate the decisions of the other. The judge in Washington said this is a national order. Everything stops. So even if we disagree, no more disagreement now. I've made an order. Why? Immigration is a national issue. We can't have willy nilly one part of the country deciding for another part of the country.

ROSE: But he did say it effected the citizens of Washington.

ROSE: The interesting thing — Could it go the Supreme Court?

KLIEMAN: It is definitely going to the Supreme Court. Whoever is going to lose here, whichever side, you could have the three-judge panel deciding one way or the other. Then you may go to the whole circuit.

ROSE: How long will it take?

KLIEMAN: Well, it could take a while, Charlie. These things are not fast. Though they will try and fast track it. Then let's look at the Supreme Court. We have eight. We don’t have nine.

O’DONNELL: Yeah. So, we have three branches of government, just to remind everybody. The executive, legislative, and judicial. What is — what are the implications of the executive, meaning President Trump, saying that about a circuit court judge.

KLIEMAN: Well, the so-called judge comment and the other comments probably in the world of the law are not part of the grounds of civility. We would  like to see the branches respect one another. But be that as it may, he certainly has freedom of speech, even as the president of the United States, whether some people like his comment or not. What is intriguing to me is that judge himself wrote in this very short order, it's really very small, he wrote about the power of the third branch of government, the judicial branch, to look over the legislative branch and to the executive branch, the President, and to make sure that any law —  and this is clearly within the President purview — to look at immigration, but that any law must pass constitutional muster. So you have three equal branches of government. This is a constitutional crisis, Norah. This is the first one.

O’DONNELL: Yeah, it is a constitutional crisis. You see now the White House chief of staff Reince Priebus saying we got to have to have a checklist now. Because a quick decision like this, if you don’t consult, could end up being, not only far-reaching, but embarrassing for the executive.

KLIEMAN: Could be. But what you also have is ability over time to redraft. You do have legislation that can be drafted by Congress or another policy drafted by the executive branch.