Silence From Networks as Clinton Global Initiative Shuts Down

The shuttering of the Clinton Global Initiative in the wake of Hillary Clinton’s brutal election loss hasn’t resulted in any interest from the three networks. ABC CBS and NBC have skipped the news that the division of the Clinton Foundation will lay off employees and close in April.

CGI filed notice with New York on January 12, but news outlets began reporting it on January 16. On Monday and Tuesday, despite a combined 17 and a half hours of morning and evening air time, the networks punted. On Monday’s Fox and Friends, co-anchor Heather Childers co-anchor highlighted:

HEATHER CHILDERS: We begin with the controversial Clinton Global Initiative. Remember that? Well, they are closing the doors for good. This comes after Hillary Clinton's crushing loss in the presidential election this November and months after WikiLeaks uncovered emails that reportedly showed corrupt management helping donors get political access, rather than focusing on charitable work around the world. Employee layoffs take effect in April.

What did ABC, CBS and NBC cover instead? On Tuesday, Good Morning America devoted 5 minutes and 41 seconds to Dancing With the Stars. The Today show offered up 4 minutes and 33 seconds to a story on “how to vacuum” and “how to mop.” CBS This Morning focused on actor Denzel Washington for 8 minutes and 12 seconds.

Clearly, there was time. 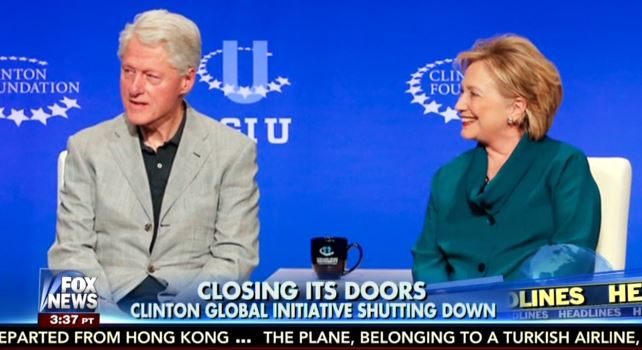 As the MRC’s Alatheia Nielsen noted, network journalists sought influence: “ABC Chief Anchor George Stephanopoulos was a ‘featured attendee’ for at least one CGI meeting (in 2007). He then promoted CGI in interviews with Bill Clinton in 2007 and 2014. Between 2012 and 2014, Stephanopoulos gave $75,000 to the Clinton Foundation, which he did not publicly disclose, according to Politico.”

Yet, on April 28, 2015, when the general public and his bosses were unaware of the donations, Stephanopoulos sounded skeptical. Talking to Jon Stewart on The Daily Show, he admitted, "But everybody also knows when those donors give that money, President Clinton or someone, they get a picture with him. There is a hope that is going to lead to something."