CNN’s Jake Tapper on Thursday called out Barack Obama for featuring a 9/11 truther celebrity at a White House event this week. The rapper Macklemore, who has repeatedly pushed conspiracy theories blaming George W. Bush for the September 11th 2001 terrorist attacks, appeared at an an Obama panel discussion on drug abuse in America. On The Lead, Tapper wondered, “Is it acceptable... for the White House which has a war against birthers, and rightly so, to have a truther come to the White House?”

Daily Beast journalist Jackie Kucinich responded, “It's hard to make the argument that the birtherism is this horrible thing and everybody should be against it when you have someone like that.”

Tapper should be commended for highlighting the issue and reminding people on Twitter of Macklemore’s 2009 tweet: “911...bush knocked down the towers.” 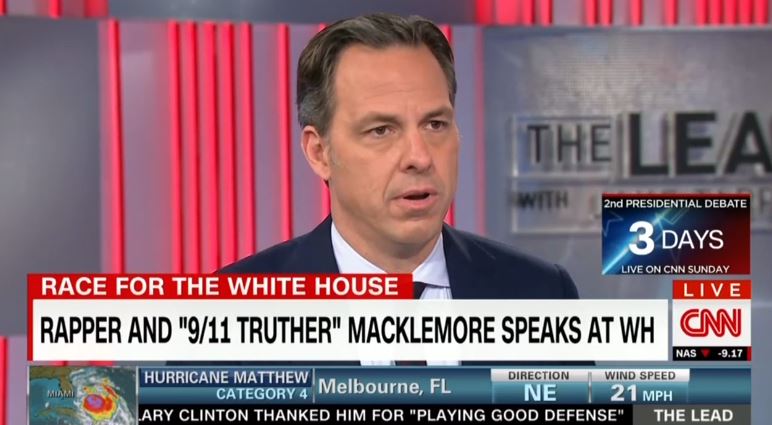 The Daily Beast noted on Tuesday that the rapper’s 2005 song “The Language of My World” included this lyric: “Where’s Dick Cheney at? Probably off in Iraq / Findin’ some oil to tap, tell ’em I got up on that / And y’all still think it was bin Laden / When it was us and the Masons, plottin’ on oil profits.”

Yet, other than the few examples like Tapper, where is the journalistic outrage against Obama for inviting this man to the White House? 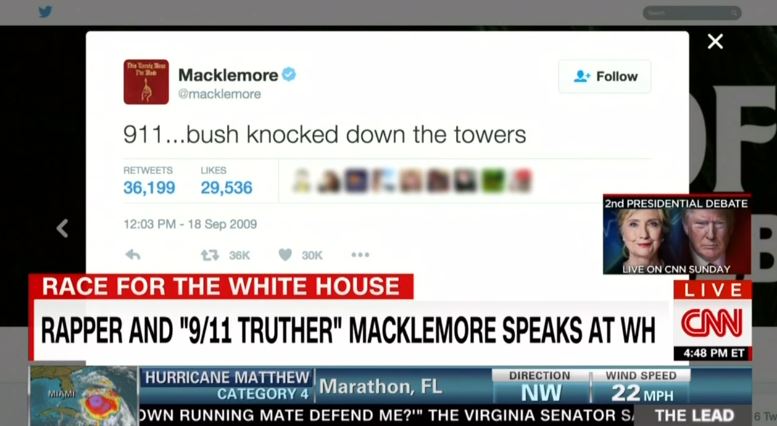 TAPPER: I want to get to 2016 in a second, but there's something that's bothering me a little bit this week. Jackie, let me go to you on this, the White House hosted rapper Macklemore as part of a panel discussion on opioid abuse in America. Macklemore is apparently a 9/11 truther. Here's a tweet from him from several years ago, "911, Bush knocked down the towers." Is it acceptable, I say in the most leading question ever, for the White House which has a war against birthers, and rightly so, to have a truther come to the White House?

JACKIE KUCINICH, WASHINGTON BUREAU CHIEF FOR THE DAILY BEAST: Yeah. This is probably not a good idea by the White House, and I'm sure they're kind of taken by surprise that he was a 9/11 truther. But yeah, it's hard to make the —  it's hard to make the argument that the birtherism is this horrible thing and everybody should be against it when you have someone like that.

KUCINICH: But he's a -- yeah. And he wears those fur coats.

TAPPER: Yeah, and the Anti-Semitic masks. But we'll move on. We'll move on from Macklemore, and my feelings about him, to talk about 2016.