It’s now been 258 days since Hillary Clinton last had a press conference. ABC and NBC on Thursday continued to yawn about this fact, but CBS This Morning actually raised the subject. Reporter Nancy Cordes also highlighted the fact that Tim Kaine previously slammed Bill Clinton for his affair with Monica Lewinsky.

Focusing on Clinton’s aversion to the press, Cordes reminded, “As Clinton counts down the days, her campaign strategy is to play it safe. She has not had an official conference in 258 days.” She added, “Her last network interview was nearly three weeks ago where she got tripped up again answering questions about her e-mails.”

Cordes then played a clip of Clinton, falsely saying, “Director Comey said that my answers were truthful.” That comment was given Four Pinocchios by the Washington Post’s fact checkers. On August 1, only CBS noted the conclusion of dishonesty. 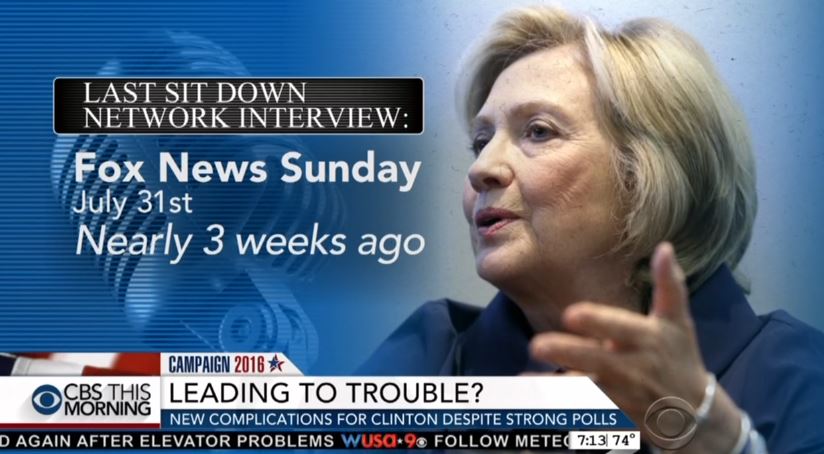 Despite a combined five hours of air time, ABC’s Good Morning America and NBC’s Today failed to mention how long it’s been since Clinton talked to the press. Instead, NBC’s Hallie Jackson explained that the Democrat is “taking aim at him this morning with a new ad looking at his taxes, arguing he should release them.”

On GMA, instead of covering Clinton dodging journalists, Matthew Dowd focused on Trump’s failing polling numbers: “Donald Trump is down virtually everywhere.” Back on August 8, Dowd advised the candidate to keep ignoring reporters: “Don't go on the air. I think the best thing that she has done in the course of this is let Donald Trump occupy the media landscape which he's consistently done and consistently made mistakes.”

On Tuesday, famous Watergate journalist Bob Woodward wondered if Clinton avoiding the press means she won’t be a “transparent” president. After 258 days, perhaps it’s time for more in the media to ask this question.

Cordes also noted that Kaine previously said that Bill Clinton should have resigned over the Monica Lewinsky scandal. The vice presidential candidate backtracked, “20 years ago, I was disappointed like a lot of folks were. But, I'll tell you, there's no reason to litigate problems 20 years ago and what Americans want to talk about what do we do today and tomorrow.” 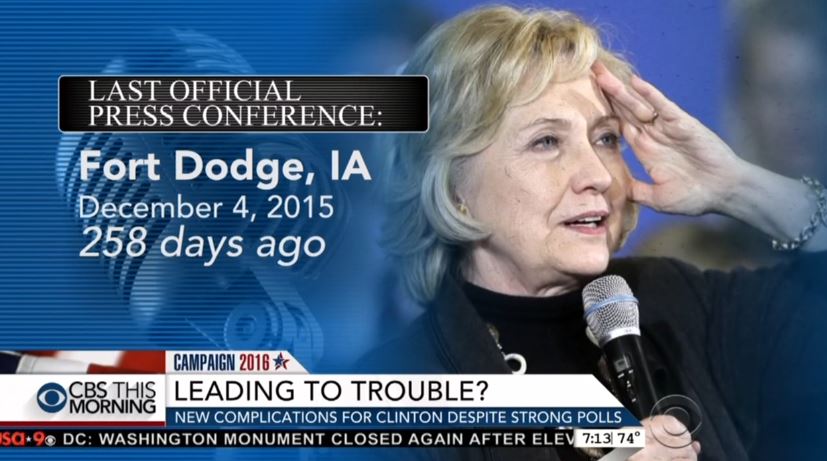 GAYLE KING: And the latest polls in three important swing states show that Hillary Clinton is ahead. The Quinnipiac poll finds she has double-digit advantages in Colorado and Virginia. Clinton leads in Iowa by three points. A different poll gives Donald Trump an 11-point edge in Indiana. Nancy Cordes reports on how Clinton is trying to downplay her recent surge. Nancy, good morning.

NANCY CORDES: Good morning. So let's face it. It's not the worst problem in the world, but leading by a lot in the polls does come with its own set of challenges. First and foremost, how do you keep your supporters, your volunteers and you donors from assuming the race is over?

CORDES: One way to do it is by insisting the race is a lot closer than they think.

TIM KAINE: I’m the underdog until they call me the winner.

CORDES: It's a tough case to make now that Clinton leading in most of the battleground states. Recent polls show her up by 12 points in Virginia and 11 in Pennsylvania.

CLINTON: Ask everybody you know to register.

CORDES: That didn't stop Clinton to try to enlist new volunteers in Philadelphia this week.

CLINTON: We have packets for you at the door so you can also canvass.

CORDES: It is true that anything can happen. In 1988, one poll showed Michael Dukakis leading then Vice President George H.W. Bush by 17 pints in late July. By election day, that poll had Bush winning by 12 points.

CLINTON: There are just 83 days left in this election.

CORDES: As Clinton counts down the days, her campaign strategy is to play it safe. She has not had an conference in 258 days. Her last network interview was nearly three weeks ago where she got tripped up again answering questions about her e-mails.

CLINTON: Director Comey said that my answers were truthful.

CORDES: Her running mate has been doing a series of interviews and was asked Wednesday about his assertion in 2002 that President Clinton should have resigned following the Monica Lewinsky scandal.

KAINE: 20 years ago, I was disappointed like a lot of folks were. But, I'll tell you, there's no reason to litigate problems 20 years ago and what Americans want to talk about what do we do today and tomorrow.

CORDES: Clinton has seen firsthand that voter complacency can have consequences. She was leading in Michigan by 20 points before that primary earlier this year, but ended up losing because some of her supporters may have felt she didn’t need them to go out and vote. Her campaign, Margaret, wants to prevent that kind of thing from happening in November.