Rubio Slams ‘Biased’ Media for Covering Up Trump’s Liberal Past

Marco Rubio on Friday appeared on all three morning shows and denounced the “biased” media for ignoring Donald Trump’s liberal past, asserting that journalists were enabling a “con artist” to take over the conservative movement. Talking to Good Morning America's George Stephanopoulos, the Senator speculated on what a Trump nomination might mean: “For those who are biased, this means you will have a Republican nominee who basically agrees with Hillary Clinton on Planned Parenthood, on being neutral on Israel” and the economy.

Addressing to the former Democratic operative, Rubio asserted, “There are people now in the media, I'm not saying you, but others, rooting for him to win because they love first of all what it means for their ratings in a general election.” As if to back up the candidate's attack on the media, Stephanopoulos dismissed, “The big question for you, is it [the debate] too little, too late?”

The co-host, who secretly donated $75,000 to the Clinton Foundation, eagerly repeated Trump’s insults on Rubio: “He's calling you a choke artist. Calling you a lightweight.” 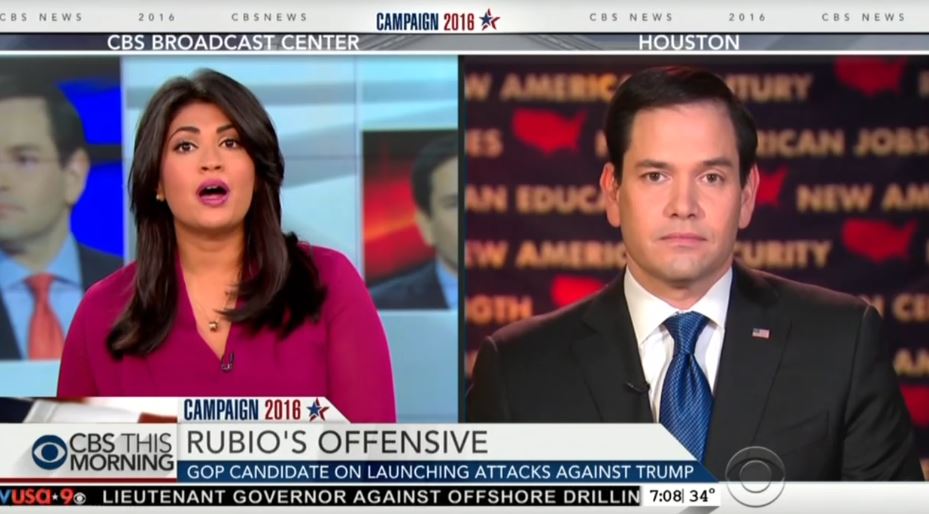 Over on CBS This Morning, Rubio lashed out at the journalists, lecturing, “If any other candidate in this race had his record, there would be nonstop reporting on it. But, unfortunately, he is being pumped up because many the in the media with a bias know he'll be easy to beat in the general election.”

Echoing the “it’s over” attitude of other journalists, Norah O’Donnell opined, “It appears that Donald Trump is rolling toward the nomination.” 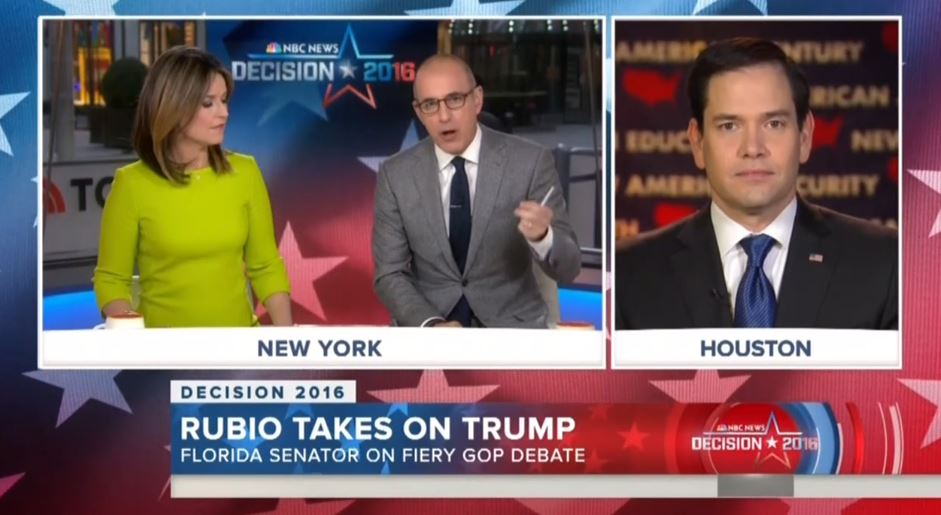 MARCO RUBIO: This guy is a con artist. I mean, he's always making things up and no one holds him accountable for it. I mean, you have a guy who’s being sued right now for fraud for Trump University. And I've had stories written about my driving record, you know, that we had red light camera tickets. 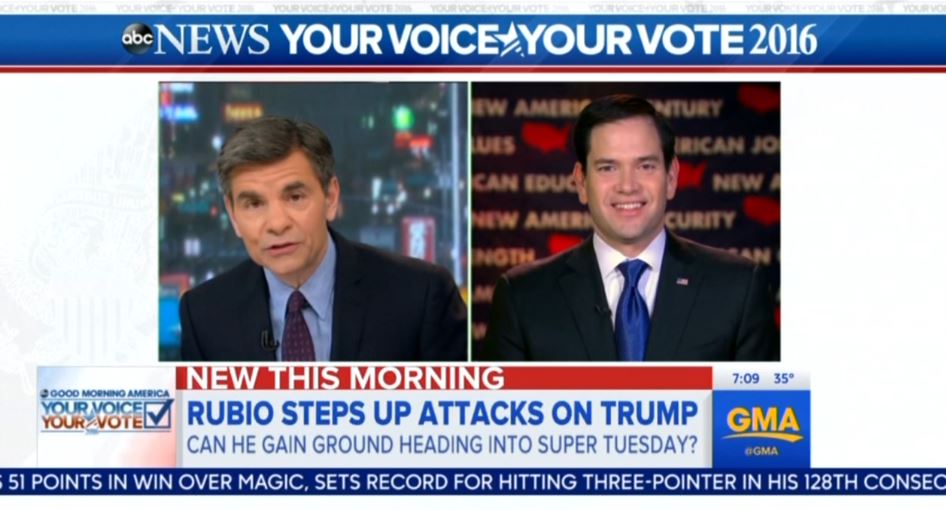 I had some guy go back and write a story about how when I was 18 years old, I got arrested – or cited, I should say – for drinking beer in a park after hours. And here’s a guy who’s being sued for fraud, for defrauding people. Here’s a guy who had to pay a judgment for hiring Polish workers illegally to build Trump Towers. And he's being treated with kid gloves by many in the media, in the hopes that he's the nominee. Some of them are biased, they'd love to see a liberal like Donald Trump take over the Republican Party, and others know he's easy to beat once he gets there.

An analysis by the Media Research Center found that the networks have ignored Trump’s past liberalism. Of the 684 minutes of coverage the businessman received through the end of January, only 1.3 percent delt with his past support for liberal policies.

A transcript of the February 26 GMA segment, which aired at 7:09am ET, is below 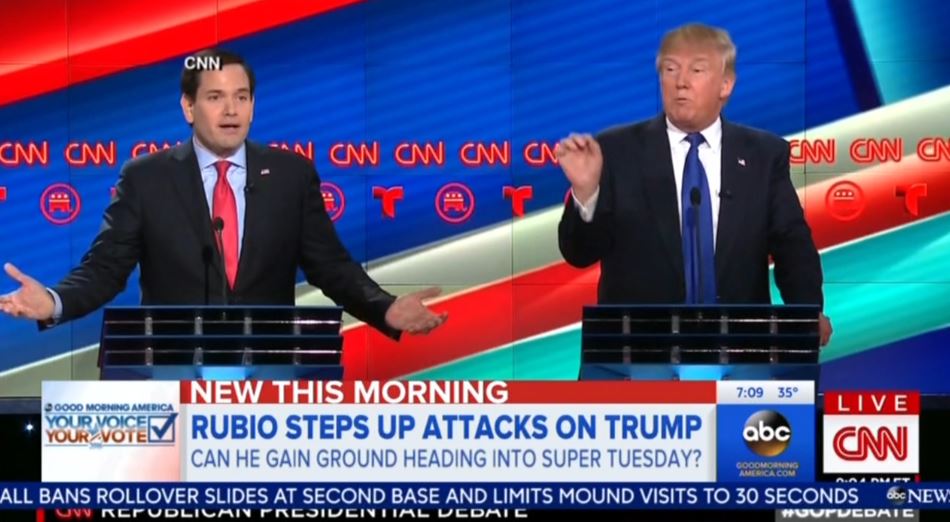 GEORGE STEPHANOPOULOS: And joining us Senator Marco Rubio from Texas. Senator Rubio, thank you for joining us this morning. Lots of great reviews and great headlines last night.

STEPHANOPOULOS: But the big question this morning for you, is it too little too late?

RUBIO: Well, I don't believe that. I think it's important for people to understand they have a choice to make. Look, if this pattern continues the conservative movement in the Republican party is going to be taken over by a con artist, by someone who is portraying himself as the fighter of the ordinary person. You know, he’s out there fighting for the working man but, in fact, Donald Trump he spent years sticking it to the working people.

STEPHANOPOULOS: Why didn't you make this case earlier? Was that a mistake?

RUBIO: Because — you know, George, I would prefer not to get into this situation where we're attacking one another, but the cover he's getting from the media these days is extraordinary. You watch last night on the cable shows afterwards. They're all like “What is Trump going to do now to Marco Rubio?” Like he's some sort of invincible force and I think what you realize is there are people now in the media, I'm not saying you, but others, rooting for him to win because they love first of all what it means for their ratings in a general election. But here's the other, for those who are biased, this means you will have a Republican nominee who basically agrees with Hillary Clinton on Planned Parenthood, on being neutral on Israel, on —  even on issues regarding the economy like the takeover of our health care system by the government. I mean, he used the talking point last night that Democrats consistently use, that if you don't support a government intervention in the health care industry, you're in favor of letting people die in the streets. So, they're holding back and as soon as the nominee, they're open up the floodgates and hit him with a bunch of stories. And so, it's important for Republicans and conservatives to be aware of what is happening here.

STEPHANOPOULOS: Meantime, he has been hitting you over night in Twitter and in interviews. He’s calling you a choke artist. Calling you a lightweight and puts up this tweet that has the cover of the Drudge Report this morning asking where do you win? And that is a big question. Donald Trump is ahead in almost every state on Super Tuesday. You're ahead in none.

RUBIO: Yeah, I acknowledge I'm an underdog and have been my entire life, unlike Donald, I didn't inherit hundreds of millions of dollars. My dad was a bartender. My mother did the job as a maid that Donald Trump now hires foreigners to do and my whole life I've had to fight and will fight now. Because there is no way the party of Reagan and conservative movement, I’m going to allow it to be taken over by a con artist. He says I’m a choker. He's a con artist. He consistently is telling people he’s going to be out there fighting on their behalf, but he has spent 40 years sticking it to the people he claims to be fighting for.

STEPHANOPOULOS: But where do you win on Tuesday? If he wins eight or nine states, can he be stopped?

RUBIO: He can because, first of all, if you look at Tuesday most of these states will award delegates proportionately and we'll do well in virtually every state on Super Tuesday and pick up a lot of them, hopefully we will win a couple. Even if we don't you're going to see us continue to pick up delegates. And when we get into March 15th we'll win Florida, which is a ton of delegates.

RUBIO: We’ll move forward from there. No, he's not. That's one poll. We've got— we’ve seen multiple polls that show a very different race. I am — I know Florida well. I've won there. I'm from there. We are going to win Florida. Florida is not going to vote for a con artist and it's not going to vote for someone who in Palm Beach right now is now is not hiring willing Americans that are willing to work, instead he's importing a workforce from abroad. But he’s out there some immigration crusader. It's a fraud and we're going to expose it.

STEPHANOPOULOS: Senator Rubio, thanks for joining us this morning.