With No Disclaimer, George Stephanopoulos Chats With Pal Hillary

Former Clinton Foundation donor George Stephanopoulos on Wednesday interviewed Hillary Clinton, the wife of his ex-boss. The Good Morning America co-host offered no disclaimer, nor did he mention the $75,000 he secretly donated to the foundation. Instead, he asked Mrs Clinton, “[Did] you buy a Powerball ticket?”

This prompted a long laugh from the Democratic candidate. Stephanopoulos wondered, “And if you win [the lottery]?” At no time in the interview did the former White House aide bring up the brewing controversy of Bill Clinton’s sexual misconduct. Stephanopoulos also avoided the awkward subject of Hillary Clinton’s e-mail scandal and the recent release of 66 more classified messages.

Back in December, Stephanopoulos interviewed Mrs. Clinton for This Week. He offered this skimpy disclaimer: “[A] reminder for everyone watching, I worked for President Clinton, made charitable contributions in the past to the Clinton Foundation.” But even that was better than Wednesday's silence on the issue. 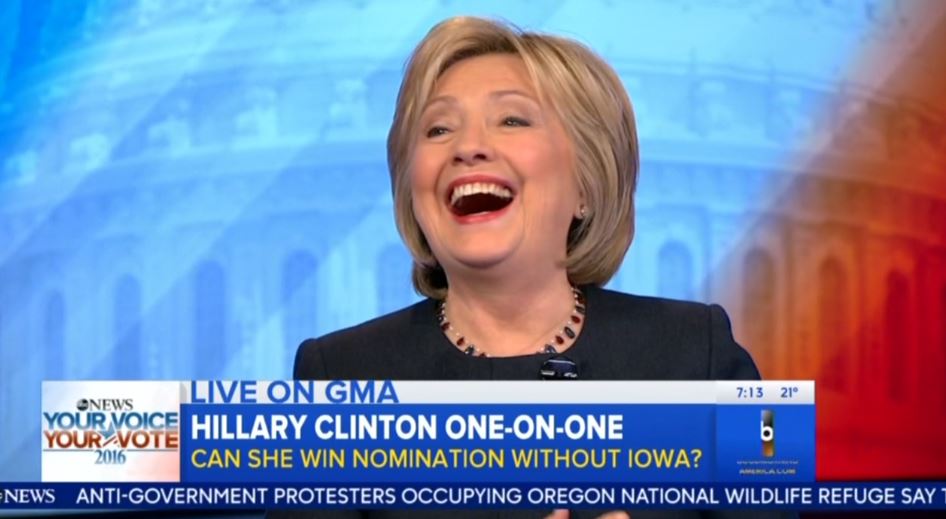 In May of 2015, he apologized for his donations, allowing, “I should have made additional disclosures on air when we covered the foundation and I now believe directing personal donations to that foundation was a mistake."

On Wednesday, the best Stephanopoulos could do for tough questions is do press Clinton on process and Democratic polling. He quizzed, “Senator Sanders says you're starting to draw these contrasts because you're getting nervous.”

He added, “Why so many polls show Bernie Sanders doing better against Donald Trump than you?”

A transcript of the January 13 segment is below: 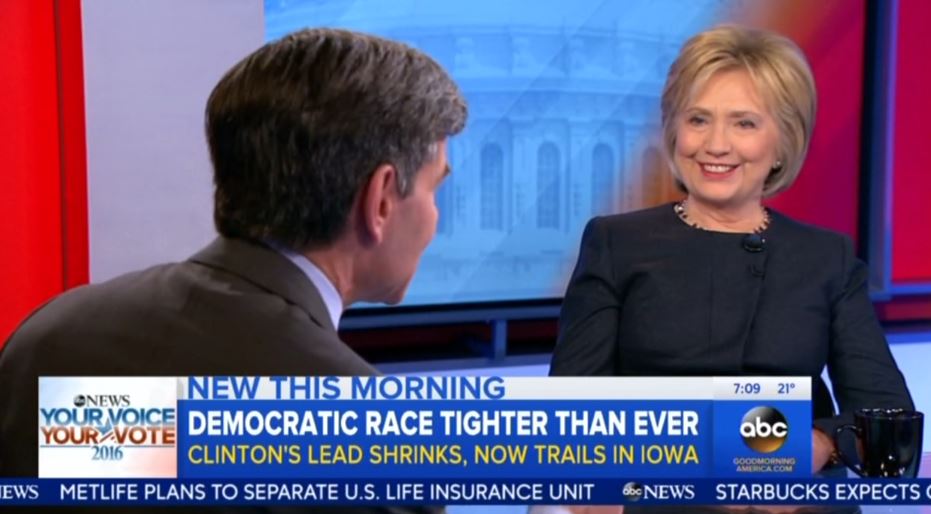 GEORGE STEPHANOPOULOS: Hillary Clinton is here right now joining us live. Secretary Clinton, thanks for joining us this morning. Let me pick up where Cecilia's piece left off, that attack on Senator Sanders's health care record. Chelsea saying he's going to dismantle ObamaCare. Sanders's campaign says that's not true and going beyond ObamaCare and President Obama’s former strategist David Axelrod weighed in as well. He said it's really not an honest attack. It’s not something they should have sent her out to do.

HILLARY CLINTON: Well, first of all, you know, I adore my daughter and I know what she was saying because if you look at Senator Sanders's proposals going back nine times in the Congress, that's exactly what he's proposed. To take everything we currently know as health care, Medicare, Medicaid, the C.H.I.P program, private insurance now the Affordable Care Act and roll it together.

STEPHANOPOULOS: But give health care to everyone.

CLINTON: Well, but let's get the specifics, George. That's why I'm saying, we are now in the area where we have to go from generalization to specifics. I have said what I will do to improve the Affordable Care Act and I've laid out specifics about out of pocket cost and prescription drug costs. What Senator Sanders has said, and it's his perfect right to say it, is he wants a national health care single payer system. Okay. So, now tell the people how much it will cost them. Because every analysis shows it's going to cost middle class families and working families and also explain why after this historic achievement of President Obama, we've been fighting to get some kind of a affordable care since Harry Truman. Now he wants to start all over again and I think those are legitimate questions. That's what people are asking me out in Iowa and New Hampshire and we deserve to give answers.

STEPHANOPOULOS: Senator Sanders says you're starting to draw these contrasts because you're getting nervous.

CLINTON: [Laughs] You know what, I have a different rhythm about how a campaign goes and maybe it's based on my experience compared to his. But we have spent the beginning of this campaign for months now where I've been laying out my policies, where I've been meeting with people, listening to them about what they want the next president to do. And now we're in the sprint and it is time to draw contrasts so that, look, there's no comparison between what the Democrats believe because we have some of the very same objectives compared to what the Republicans are peddling. But there are substantive differences between us and I want people to know about that. This is —  you know, this is all in the context of my deep respect for him and his many years of service, but we have differences on guns, on tax, on health care and I think people should have that information before they go to the caucus or the primary.

STEPHANOPOULOS: You've also been saying making issue of electability saying you're the candidate who can win in November. Here's the ad you put in Iowa last week.

CLINTON AD: So ask yourself who is the one candidate who can top them? Hillary Clinton. Tested and tough. To stop them, stand with her.

HILLARY CLINTON: I'm Hillary Clinton and I approve this message.

STEPHANOPOULOS: That ad certainly implies you think Bernie Sanders cannot win a general election. Is that what you believe?

CLINTON: What that ad says is that I have the experience, the toughness, the resilience to be able to take on the Republicans. I think that’s a very —

STEPHANOPOULOS: It also says you're the only one.

CLINTON: Well, I think I will do the best job of making sure we don't let a Donald Trump or a Ted Cruz become the next president of the United States.

STEPHANOPOULOS: Why so many polls show Bernie Sanders doing better against Donald Trump than you?

STEPHANOPOULOS: Your own campaign saying if you lose Iowa it could change the course of the election. Is that what you believe?

CLINTON: You know, I want to win. But I have a very long view about this. I've been organizing in the states that come after South Carolina, Nevada and in the states that come after that. Look, I campaigned until June last time as we all remember —  I feel very strongly that we must have a Democratic president to succeed president Obama. That's what I'm going to be making the case for.

STEPHANOPOULOS: Before we go, you buy a Powerball ticket?

STEPHANOPOULOS: And if you win?

STEPHANOPOULOS: Senator Clinton, thanks for joining us this morning.