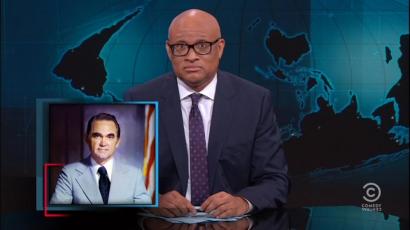 A conservative-hating, liberal comic has been chosen for the 2016 White House Correspondents Dinner. This time, it’s Nightly Show anchor Larry Wilmore. Scheduled for April 30, the dinner will likely contain many of the slimy attacks the comedian is known for. On November 30, Wilmore blamed the Planned Parenthood shooting on Fox News.

Regarding claims that the shooter shouted “no more baby parts,” the host sneered that it’s “almost as if it was served up in a nice cold pitcher of Fox and their friends’ Kool-Aid.” In September, Wilmore mocked Kentucky clerk Kim Davis as similar to George Wallace and serial killer Jeffrey Dahmer.

In December, the comic declared “creepy” Ted Cruz to possibly be mentally ill. While his guest, Aida Rodriguez, claimed that the Texas senator’s agenda will be “to do everything the KKK does.”

“Larry's edgy, even provocative, brand of humor means he's certainly up to the task of skewering politicians of all ideological stripes, and we don't expect the nation's news media to escape unscathed, either," said WHCA President Carol Lee, a White House correspondent for The Wall Street Journal. “We are thrilled that Larry has accepted our invitation to be the featured comedian at our annual dinner, which will be the last during the Obama White House."