ABC: Trump ‘Declared His Own Personal Jihad on American Values’

Whether one considers Donald Trump’s recent comments highly offensive or simply over-the-top, it’s clear that the networks have abandoned any attempt at objectivity on the topic. From Hitler comparisons to Nazism and McCarthyism, ABC, NBC and CBS have not held back. On Wednesday, Good Morning America’s Tom Llamas trumpeted the New York Daily News’s latest assault.

Llamas described the front cover featuring Trump. The journalist cheered, “It shows Trump with a large sword. His victim? The Statue of Liberty.” Llamas opined, “The message, Trump has declared his own personal jihad on American values.”

This is the same Llamas who repeatedly screamed at Trump during a news conference.

ROBIN ROBERTS: But we’re going to begin with Donald Trump. Many continuing to lash out against him. An avalanche of criticism from his own party. Want to take a look at some of the Republican leaders who have denounced the plan. The GOP front-runner sitting down with Barbara Walters for an exclusive on-camera interview and ABC's Tom Llamas starts us off. Good morning, Tom. 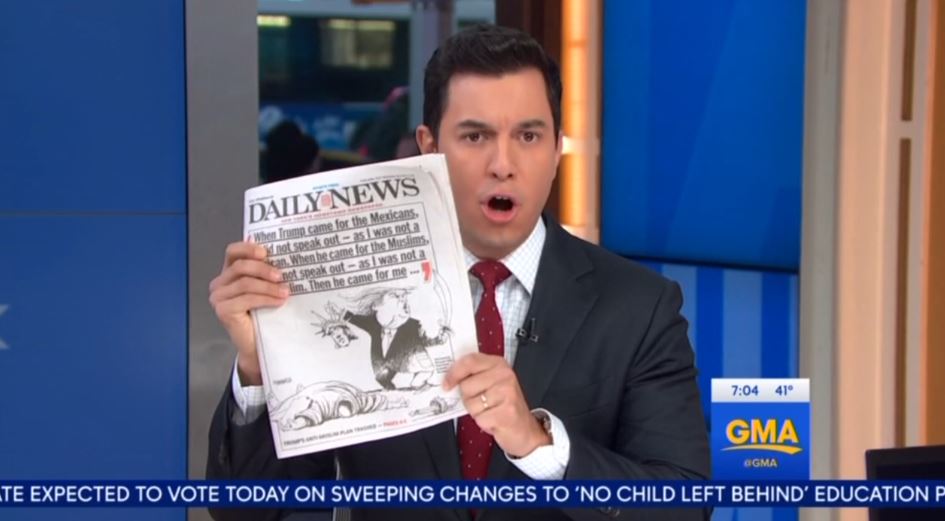 TOM LLAMAS: Robin, good morning to you. Donald Trump says to make America great again he has to make America safe again. But there is now bipartisan outrage to his plan. Leaders here and abroad saying Trump has gone too far. This morning, Donald Trump pushing forward with his call to ban Muslims from coming to America.

BARBARA WALTERS: Are you a bigot?

DONALD TRUMP: Not at all. Probably the least of anybody you've ever met.

LLAMAS: In an exclusive on camera interview with Barbara Walters, Trump explains the idea for the ban is a direct result from the attacks on the World Trade Center and last week's shooting in San Bernardino. 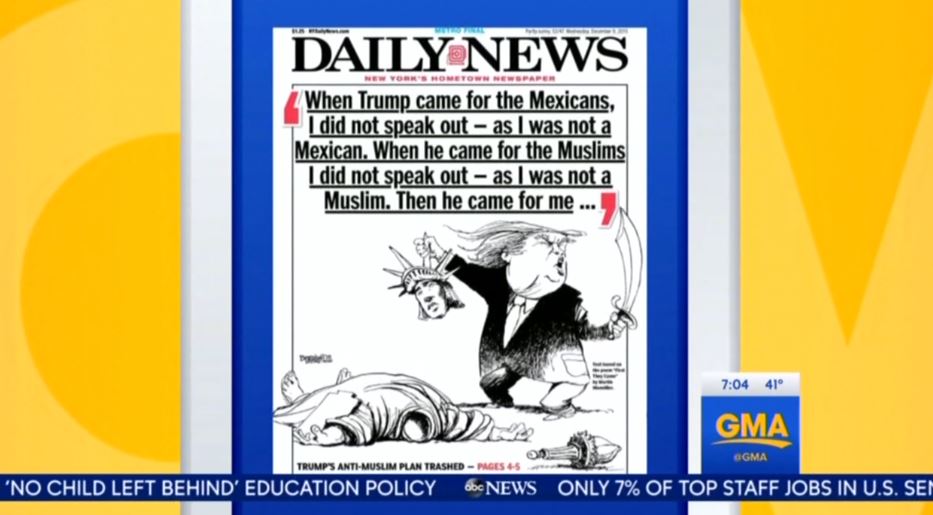 LLAMAS: But does that mean being un-American? That's the way the plan is being described by the White House.

LLAMAS: Democratic front-runner Hillary Clinton seizing the moment, trying to put all the GOP candidates under the Trump tent.

HILLARY CLINTON: They are all driving the exact narrative that jihadists want to advance. That we are at war, not with barbarous, violent murders but with an entire religion. This a grave mistake.

LLAMAS: But Trump's fellow candidates are blasting him as well.

MARCO RUBIO: What he proposed was not well thought out. It was impulsive. He didn't think it through. It violates the Constitution. It places a religious test and isn't the best way to do this.

LLAMAS: The chairman of the Republican National Committee saying “we need to aggressively take on radical Islamic terrorism, but not at the expense of our American values.” But Trump says he's the front-runner for a reason. His supporters know exactly what he stands for.

JOANNE WALLER (voter): I like what he had to say about the Muslims. We just got to get control.

JEFF MONTELEON (voter): It's a short-term problem that's — I just think it's going to be good for the safety of the USA.

TRUMP: I’m the worst thing that's ever happened to ISIS. The people in my party fully understand that. They're running against me. For the most part, they have no poll numbers. I'm leading by a lot. They get it and they’re trying to get publicity for themselves.

LLAMAS: Now leaders from all over the world condemning trump including France, Indonesia, Egypt and the U.K. And today we want to show you something from this morning. It is a bit graphic. It is one of Donald Trump's hometown newspapers, the New York Daily News. It shows Trump with a large sword. His victim? The statue of liberty. The message, Trump has declared his own personal jihad on American values. George and Robin.

STEPHANOPOULOS: Boy, he is stirring up so much emotion right now.