Struggling to offer an alternative explanation for the obvious conclusion of terrorism, CNN’s Erin Burnett on Thursday wondered if one of the killers from Wednesday’s rampage snapped as a result of “postpartum psychosis.” This was after two former FBI agents explained to Burnett just how Tashfeen Malik was radicalized.

Despite this, the CNN anchor wondered, “I just have to ask you, could there be something else, anything else, that could have explained her involvement? Something like a postpartum psychosis?” Former FBI profiler Jim Clemente calmly told Burnett that “postpartum psychosis... is typically internal.”

Her question came after Clemente noted that Malik “was able to act calmly in this tactical assault and the shootout with the police.” He added, “That's the kind of thing that only comes with practice and massive preparation.”

Another agent, Robert Chacon, told Burnett: “She clearly had advanced training and clearly lots of it.”

CNN.com on Friday explained that the female shooter’s Facebook page “pledged allegiance to ISIS.” So, just perhaps, this mass murder wasn’t a result of “postpartum psychosis.” Maybe Burnett should check her network's website.

A transcript of the December 3 Erin Burnett OutFront exchange is below: 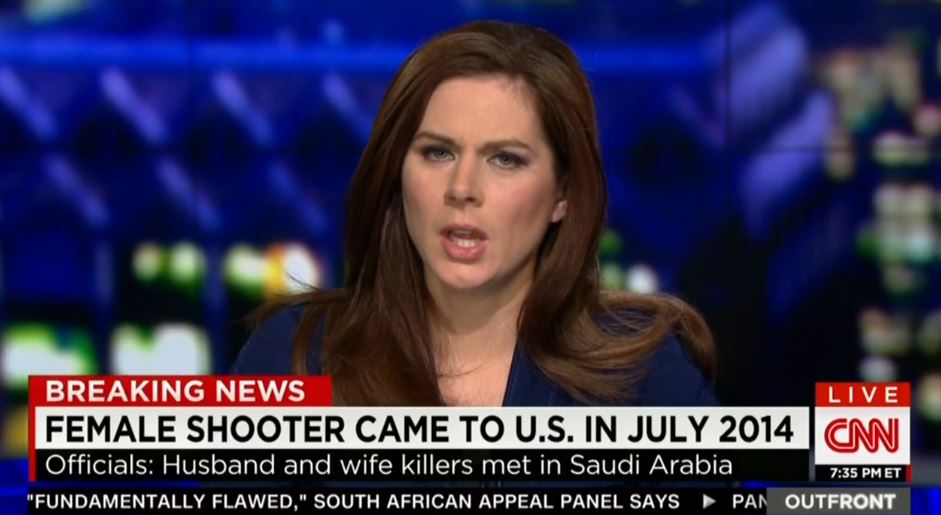 ERIN BURNETT: The crucial part about her role, I mean, they had a new baby, a six-month new baby. We just heard, you know, the guy who sat next to him told our Kyung Lah that they had a baby shower for him. There were no signs of anything but joy about a new baby. And she's the mother of a six- month-old. It's unnatural for her to do what she did. I mean, what could explain that, to leave a new baby, drop it off with someone else in the morning and then go, knowing that you would at the least never see that baby again?

JIM CLEMENTE (former FBI profiler): Well, I think it does —  it is very unnatural and it's something that would have taken a tremendous amount of effort to do on her part. That means that the level of her commitment to this cause had to be extremely high. And that's why I believe that she was already radicalized and he didn’t turn her. Also, the fact that she was able to act calmly in this tactical assault and the shootout with the police. That's the kind of thing that only comes with practice and massive preparation. So, she was definitely trained and prepared for this kind of event. I think they were going out in a hail of bullets either way. And that was their plan.

BURNETT: And Bobby, how much training do you think she had? To emphasize, when he went and did the attack, then when they drove away, he was the one, we understand from what officials have said, who was driving. She was in the back seat with an AR-15 engaged in a firefight with the police. She was. Tashfeen Malik was the one actually in the firefight.

ROBERT CHACON (Former FBI special agent): Yes, she clearly had advanced training and clearly lots of it. It's going to be harder to determine that because she was living overseas but my former colleague sent immediate leads last night overseas to all of our FBI legats in the area to determine her background, her connections. They are currently working very hard to develop a profile of her and to see what training she had, not only for this particular case, but, you know, whether she had friends or sisters or people, a common cause with her who have come over on these fiancee visas. And they're currently here. I'm sure they are tracking that data.

CLEMENTE: Well, postpartum psychosis, in the cases that I've seen of it really is typically internal. I mean, the violence goes internally or within the family. The kids are most likely going to be the targets of that or the person suffering from it. So, I don't see this as a common case of postpartum psychosis. This is something much more related to extremism.

BURNETT: All right. Thank you both very much.