Rosie O’Donnell, the past and future co-host of The View, on Friday reaffirmed her support of the 9/11 truther conspiracy theory. When asked by this writer if she continues to reject the idea that Muslim terrorists flew planes into buildings, O’Donnell tweeted in response, “i still do not believe the official story.” 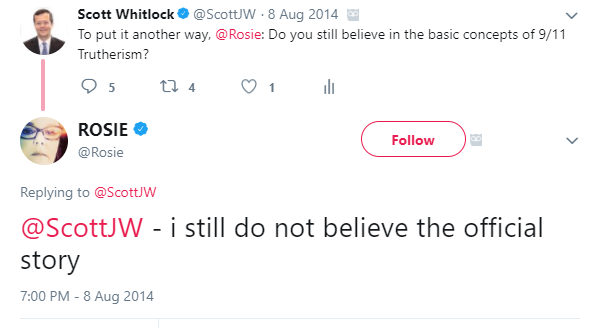 O’Donnell left The View in 2007 after battling with conservative Elisabeth Hasselbeck. On March 29, 2007, she promoted trutherism, saying of September 11th: “I do believe it is the first time in history that fire has ever melted steel. I do believe that it defies physics for the World Trade Center Tower Seven, building seven, which collapsed in on itself, it is impossible for a building to fall the way it fell without explosives being involved…” ABC invited O'Donnell to return as a View co-host for the fall 2014 season.

On May 14, 2007, O’Donnell offered this bizarre theory, linking Rudy Giuliani to the conspiracy:

JOY BEHAR: "Well, the one thing is that Giuliani post-9/11 appeared to be very heroic. But now they're saying that he was not that efficient in helping the people who were the recovery, the responders.

ROSIE O'DONNELL: Also, he was, you know, instrumental in making sure that all of the steel was removed and shipped to Canada right away, Giuliani, was shipped to China, sorry, right away.

BEHAR: "For what purpose?"

O'DONNELL: "Well, to get it out of there and to have, you know, all of the stu -- but it was all gone. So there was no like metal to test. There was no, there was no-"

ELISABETH HASSELBECK: "Giuliani was involved in the cover-up is that what's going on? I just want to check."
— Discussion of 9/11 the May 14, 2007 edition of ABC's The View.

Nicolle Wallace, former George W. Bush communications chief, is reportedly about to be named the conservative replacement on The View. Many truthers believe Bush was behind 9/11. One wonders if Wallace will challenge O'Donnell on this outrageous assertion.

ABC has slammed conservatives for even the most imagined connection to the birther conspiracy theory. Yet, this same network is giving a national platform for a similarly false belief.