In April, CBS and NBC found no time to cover the protests against Michelle Obama's planned graduation speech to high school students in Kansas. But both networks on Monday hyped the bullying of Condoleezza Rice from speaking to Rutgers University. Some of protest signs included an ugly caricature of the first female African American Secretary of State. Instead of discussing this, CBS This Morning journalist Elaine Quijano reported that "some felt" Rice "didn't deserve the honors because she championed war in Iraq and supported harsh questioning of detainees." [See video below. MP3 audio here.]

Quijano included two clips of liberal students chanting, "Hey, hey. Ho, ho. Condi Rice has got to go!" She then featured a clip of a professor deriding, "A person who has condoned and been involved in torture is not an appropriate person to receive an honorary degree of laws, no less."

On Sunday's Today, David Gregory did find it to be a "surprise" that "otherwise progressive institutions take a stand that they don't want to hear certain people's points of view." But he then quickly explained away the protests: "But I think that, certainly on college campuses, [Iraq is] still an issue that resonates. And the legacy of the war and some of those feelings have not abated." 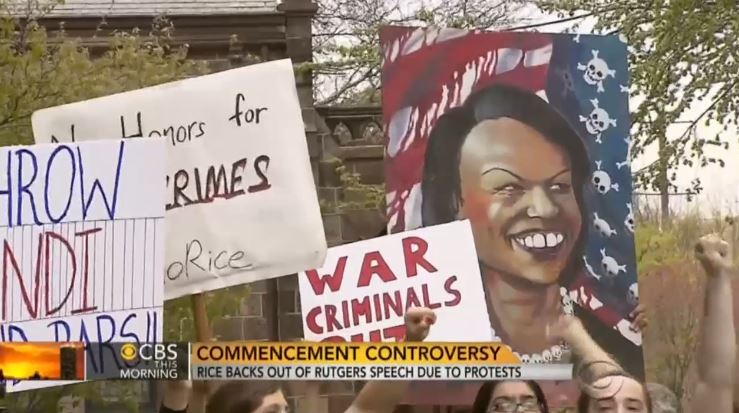 Almost shrugging, he added, "So, you know, figures, major figures in the Bush administration are going to be subjected to that kind of protest."

Neither NBC nor CBS reporters discussed the protest signs that showcased Rice with large buck teeth. (CBS featured them on-screen with no comment.)

In April, students in Kansas objected to having Michelle Obama at their commencement, fearing it would lead to a single ceremony that limited the number of guests. All three networks avoided this development, thus dismissing it as a controversy.

Condoleezza Rice lacks “moral authority.” She fails to meet the standards of “exemplary citizenship” and she does not have what it takes to “inspire” graduating college seniors.

Yes, apparently the first African-American woman to serve as National Security Adviser and the nation’s Secretary of State doesn’t have what it takes to be honored by Rutgers.

Rice holds a Ph.D. in political science. She has taught college for decades. She was Provost of Stanford University. She worked her way up from a working-class family in the segregated South to the highest echelon of world power and politics.

Liberals are shockingly quick to demean and dismiss brilliant black people like Rice, Carson, Supreme Court Justice Clarence Thomas, U.S. Senator Tim Scott (R-SC), Professor Walter E. Williams and economist Thomas Sowell because they don’t fit into the role they have carved out for a black person in America.

Black Americans must be obedient liberals on all things or risk being called a race traitor or an Uncle Tom.

A transcript of the May 5 segment, which aired at 7:37am ET, follows:

GAYLE KING: With just days to go, Rutgers University is without a commencement speaker this morning. Former Secretary of State Condoleezza Rice dropped out after protests from students and faculty at the New Jersey college. Elaine Quijano looks at the latest campus controversy involving a public figure. Elaine, good morning. 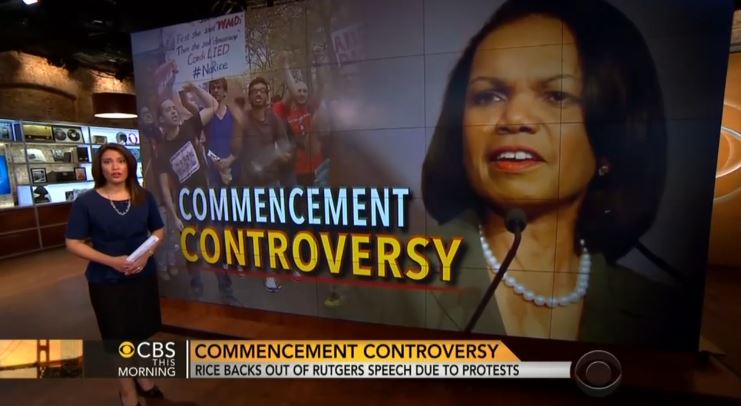 ELAINE QUIJANO: Good morning. Some at Rutgers thought Condoleezza Rice should not be their commencement speaker because of her role in the Iraq War. Now that she's stepped aside, university officials are scrambling to find a replacement.

QUIJANO: For weeks, Rutgers had been in an uproar over the possibility that Condoleezza Rice would be the featured graduation speaker and receive an honorary degree.

STUDENTS CHANTING: What you say? Stand back? We say, fight back!

QUIJANO: Some felt that the first black female Secretary of State didn't deserve the honors because she championed war in Iraq and supported harsh questioning of detainees.

RUDOLPH BELL (Rutgers University history professor): A person who has condoned and been involved in torture is not an appropriate person to receive an honorary degree, of laws no less.

QUIJANO: On Saturday, Rice withdrew, saying in a statement that she didn't want to be a distraction the graduating students. "As a professor for thirty years at Stanford University, I understand and embrace the purpose of the commencement ceremony and I'm simply unwilling to detract from it in any way," she said. Matthew Chingos studies education policy at the Brookings Institution.

MATTHEW CHINGOS (Brookings Institution): I think she did get a raw deal in having a small number of vocal protesters, you know, change the outcome of this event for everyone else.

QUIJANO: At many campuses, protesting invited speakers is a rite of passage. In September, students harassed General David Petraeus on his way to giving a lecture at the City University of New York. Former NYPD commissioner Ray Kelly was shouted down at Brown University one month later.

QUIJANO: Both Attorney General Eric Holder and former Health and Human Services Secretary Kathleen Sebelius faced stiff opposition when they were asked to give graduation speeches.

CHINGOS: A lot of times, if you bring in someone who has had a, you know, important career, has held a powerful position, those people tend to be controversial.

QUIJANO: Detractors at Rutgers insist political correctness was not a factor in their opposition to Rice. Secretary Rice was supposed to give the commencement address on May 18th and she would have been given $35,000 for it.

KING: They don't have much time to find somebody tif the commencement is May 18th.

O'DONNELL: Yes. You know, universities are places for debate. They are, indeed. They are indeed that and it's interesting how different people will react to that.