Alan Grayson's KKK Smear of Tea Party Is Avoided By Networks, But Chided on MSNBC

All three networks on Tuesday night and Wednesday morning avoided discussing Congressman Alan Grayson's smear of the Tea Party as just like the Ku Klux Klan. In a new fund-raising e-mail, the controversial Democrat linked the grass roots organization to violent racists, complete with a burning cross.

CBS and NBC made no mention of the attack. The reporters on Good Morning America ignored the story. But if viewers looked very closely at the bottom of the screen they would see a one sentence crawl: "Florida Congressman compares Tea Party to KKK." Yet, Grayson's slam was surprisingly questioned on the very liberal MSNBC. Anchor Thomas Roberts on Wednesday pressed Democratic Congressman John Yarmuth: "Would you agree that the President should condemn that type of solicitation?" [See video below. MP3 audio here.]

After Yarmuth knocked the KKK comparison as a "mistake" and called on Grayson to apologize, Roberts actually followed-up: "So do you think it should just end with him or do you think the President should come out and condemn it?"

Perhaps Roberts has learned from his own experience. On December 14, 2011, he attempted to slime then-Republican presidential candidate Mitt Romney:

THOMAS ROBERTS: So you might not hear Mitt Romney say "keep America American" anymore. That's because it was a central theme of the KKK in the 1920s. It was a rallying cry for the group's campaign of violence and intimidation against blacks, gays and Jews. The progressive blog America blog was the first to catch onto that."

ROBERTS: Now to some important housekeeping that I wanted to do myself. During yesterday's 11am, we reported on a blog item that compared a phrase used by the Romney campaign to one used by the KKK in the 1920s. It was irresponsible and incendiary of us to do this and showed an appalling lack of judgment. We apologize to the Romney campaign.

Grayson's caricature of the Tea Party as angry, KKK-styled racists squares neatly with the fictional Republican TV producer Aaron Sorkin described in his HBO program Newsroom. On the September 15, 2013 program, "Will McAvoy" sneered of his fellow Republicans: "The problem is now I have to be homophobic...But most of all, the biggest new requirement, really the only requirement, is that I have to hate Democrats."

A partial transcript of the October 23 MSNBC Live segment is below: 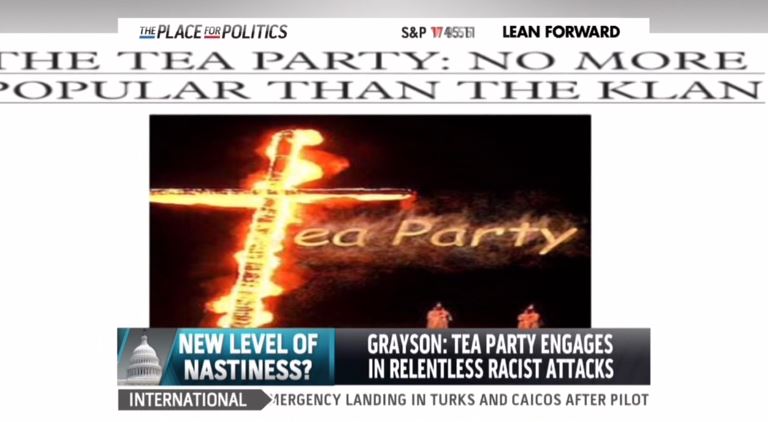 THOMAS ROBERTS: On the Democratic side of things, Congressman Alan Grayson is getting heat for sending out this fund-raising e-mail with the image of a burning cross that says, quote, "the Tea Party is no more popular than the Klan." Republicans like Alan West are calling on President Obama to condemn that e-mail and the Republican Congressional Committee calls it hateful. In a statement to the Huffington Post, Grayson says, quote, "if the hood fits, wear it."

ROBERTS: So do you think it should just end with him or do you think the President should come out and condemn it?

YARMUTH: Well, you know, I think the president can't be responsible for what every Democrat across the country does. If he wants to express himself on it, I think that's fine, but I don't think he's under any obligation to comment on what individual members do.