The journalists at Good Morning America on Friday worried that "inhospitable" Republicans in the House would leave the Senate immigration bill as "half-made history." Reporters Dan Harris and Jim Avila offered little in the way of explanation as to why a GOP Congress member might possibly oppose such a bill.

Avila lectured, "...History has been half-made. Now, the big question, will the euphoric momentum in the Senate halls push the GOP-controlled House into passing a similar immigration reform bill?" [See video below. MP3 audio here.] Dan Harris lamented, "The issue is about to move to the inhospitable Republican-controlled House." Avila read through a litany of supposedly tough measures in the legislation, but didn't explain, for instance, that the Senate bill is riddled with pork.

Instead, the journalist hailed the "unprecedented billions to the border" and the "militarizing" of America's southern border.

O'Donnell also featured conservative Senator Mike Lee attacking, "It's not tough on those who have broken the law and it's not fair for the people who have been trying to come here legally."

On CBS This Morning, Nancy Cordes also provided information that ABC left out. Speaking of Republican Congressman Bob Goodlatte, Nancy Cordes noted, "The main goal, he says, is to avoid a repeat of 1986 – when an immigration bill, signed by President Reagan, legalized three million people, but failed to live up to promises to secure the border." 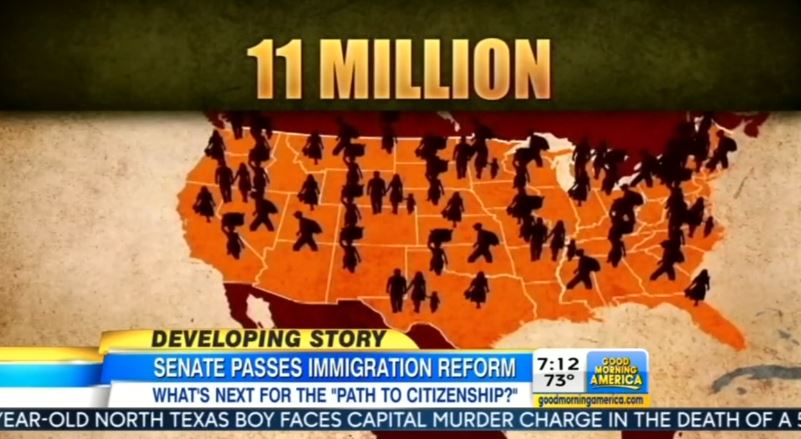 Both CBS and NBC also showcased the liberal view on the immigration bill. But at least these programs explained the GOP opposition.

On GMA, a baffled Avila announced that Speaker John Boehner has said "a majority of Congress is not enough." The reporter added, "In fact, he wants a majority of Republicans to support this bill before he even brings it up for a vote."

Is this new to Avila? Boehner was simply reiterating the so-called Hastert Rule. Political Dictionary explains:

A philosophy that requires the "majority of the majority" to bring up a bill for a vote in the House of Representatives.

Republicans have used this rule consistently since Speaker Dennis Hastert wielded it in the mid-1990s to effectively limit the power of the minority party. Democrats were prevented from passing bills with the assistance of a small number of members of the majority party.

This is not a new concept.

A transcript of the June 28 segment is below:

DAN HARRIS: And now, to Washington, where this is the morning-after for supporters of immigration reform. One day after the Senate passed that sweeping bill, a hard reality is now setting in. The issue is about to move to the inhospitable Republican-controlled House. ABC's White House correspondent Jim Avila, who covers immigration for us, joining us from the Capitol this morning. Good morning. 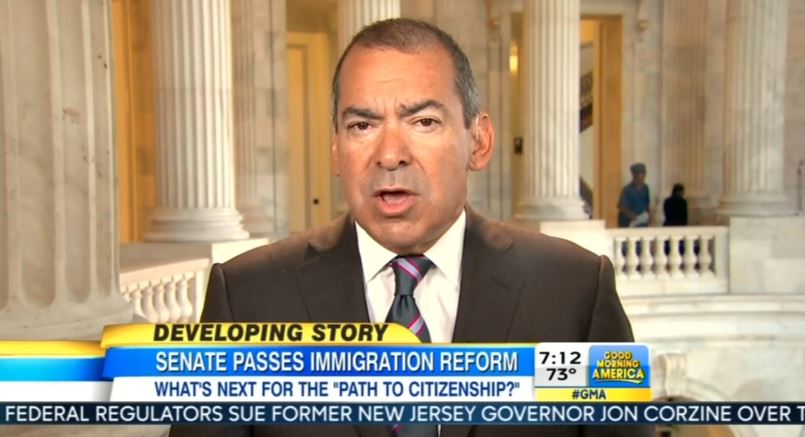 JIM AVILA: Good morning, Dan. As you said, history has been half-made. Now, the big question, will the euphoric momentum in the Senate halls push the GOP-controlled House into passing a similar immigration reform bill? The Senate bill would bring 11 million undocumented immigrants out of the shadows. Immediate legalization. And then, an arduous 13-year pathway to citizenship, that would require them to stay off government assistance. It would require employers to verify the Social Security numbers of all people they hire, while encouraging more legal immigration. In order to generate more votes from conservatives, the Senate bill funneled unprecedented billions to the border. Militarizing America's southern frontier with double the number of border patrol. Seven hundred miles of border fencing and new drones, all-terrain vehicles, ground radar and surveillance cameras. The bipartisan package passed overwhelmingly. But the most difficult road is ahead. 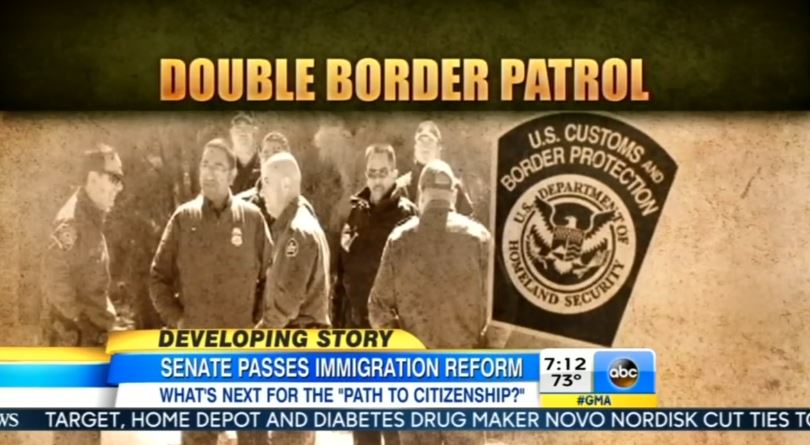 SPEAKER JOHN BOEHNER: The House is not going to take up and vote on whatever the Senate passes. We're going to do our own bill.

AVILA: So, now, the supporters of immigration focus their attention on the House, where Speaker Boehner says that a majority is not enough, a majority of all Congress is not enough. In fact, he wants a majority of Republicans to support this bill before he even brings it up for a vote. Dan?

HARRIS: As you say, history half-made this morning. Jim Avila, thank you.