In years past, Good Morning America weatherman Sam Champion would aggressively hype odd environmental protests, such as a man who decided to live in his own filth for a year or another individual who opted to forgo toilet paper. But, as a Democratic president settled into office and the ABC morning show surged in the ratings, the program subsequently lost interest in climate change and other green issues.

On Monday, Earth Day, Champion was reduced to celebrating the holiday by interviewing cook Mario Batali. He blandly asked, "What are you doing to celebrate Earth Day in your restaurants?" On Earth Day 2011, Champion toiled for his corporate bosses and hyped a Disney movie: "DisneyNature is marking the opening day of its newest film, 'African Cats' here on Earth Day." This is a far cry from the Bush years. Back then, every day was Earth Day. On January 31, 2007, he anchored a segment on climate change with an on-screen graphic that read, "Will Billions Die from Global Warming? New Details on Thirst and Hunger." 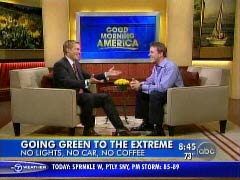 On June 25, 2007, Champion featured a liberal environmental activist who shunned toilet paper for a year.

On September 9, 2009, Champion again talked to the so-called "No Impact Man." This was the third time Colin Beavan appeared. On May 10, 2007, the host deemed the toilet paper boycott a "serious experiment."

On February 9, 2009, Champion highlighted Dave Chameides, a Los Angeles man who chose to live with his own garbage for a year (to save the planet somehow). The segment aired only a few weeks after the inauguration of Barack Obama. As the new President settled into office, the meteorologist's environmental causes appeared less and less regularly. 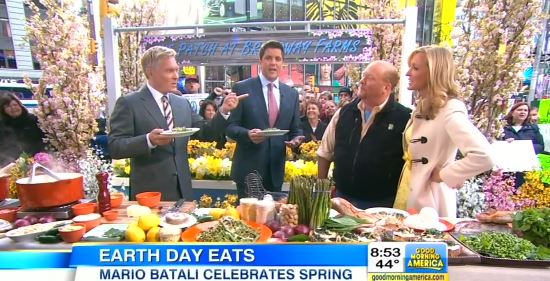 There were exceptions. On the July 10, 2012 World News, Champion saw "extreme weather" as connected to climate change.

Overall, however, GMA has appeared less interested in discussing garbage life and going to the bathroom without toilet paper. In 2012 and into 2013, as the ABC program regularly began to beat the Today show in the ratings, this trend continued.