Fear-Mongering ABC: Is There a Sinkhole Underneath Your House?'; It's 'Sinkhole Season'

Liberal news outlets will sometimes complain about conservative fear-mongering, but ABC sure understands the practice. On Friday night, the announcer for 20/20 teased, "Is there a sinkhole underneath your house?" Referring to a few incidents (and one tragic case in Florida), the program teased, "It's sinkhole season."

In a hyperbolic tone that sounded like parody, the 20/20 announcer hyperventilated, "Everything you need to know to make sure you don't get sunk. When houses that sell turn into houses from hell." It's probably worth remembering that this is the same network that hyped tiny sequester cuts as leading to the "vaporizing" of jobs and a "meat shortage."  The subjects are different, but it's the same scary language.

ABC has a history of promoting its shows by terrifying viewers. The summer of 2007 saw several examples. On May 31 of that year, then-Good Morning America news anchor Chris Cuomo intoned, "They call the swimming pool silent killers. And this is not hysteria."

On June 20, 2007, Diane Sawyer ridiculously promoted, "And your heart's racing, your palm's sweating; it's fear of bridges." 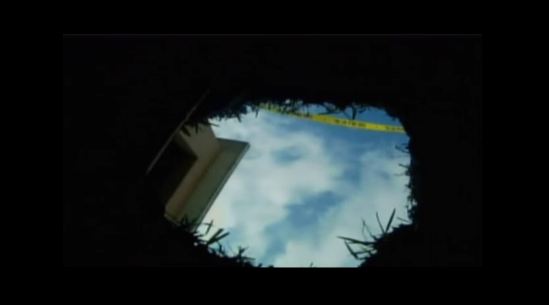 ANNOUNCER: Is there a sinkhole underneath your house?

ANNOUNCER: It's sinkhole season. They thought it was home sweet home until it got swallowed up by a giant sinkhole.

ANNOUNCER: Everything you need to know to make sure you don't get sunk. When houses that sell turn into houses from hell.

ANNOUNCER: Want to live in a hazmat suit instead of a bathrobe?