MSNBC's Martin Bashir, the man who compared Rick Santorum to Stalin, on Monday declared that the National Rifle Association "deserved to be equated with Hitler." The arch-liberal cable anchor highlighted NRA Vice President Wayne LaPierre's contention that disarming the Jews partly contributed to the Holocaust. A horrified Bashir asserted, "And so with that theory being promoted by the NRA, we've seen the most abject and abhorrent suggestion that the President of the United States is somehow the equivalent of Hitler" on the issue of firearms.

It's odd that Bashir would object to extreme comparisons, considering that, in addition to linking the conservative Santorum to Stalin, he also compared Republican Governor Rick Scott to murderous communist dictator Nicolae Ceausescu. After recounting German gun laws in the 1920s and '30s, Bashir spewed, "Of course, for a nation hell bent on genocide, Hitler did not allow the Jews to possess firearms, but virtually everyone else was free to do so." He added, "...If anyone deserves to be equated with Hitler on the issue of firearms, then it's not the President. It's the NRA." [MP3 audio here. See video below.]

LaPierre's point is not that all societies with gun control become genocidal, but that genocidal societies have an easier time when parts of the populace don't have guns. As Bashir admitted, it was the Jews, the people who needed the guns, who didn't have them.

In less than a year, Bashir has compared a Republican politician and a conservative group to Stalin and Hitler, the worst monsters of the twentieth century. Increasingly, 4pm on MSNBC is becoming the place for the network's most hateful, hyperbolic venom.

A transcript of the January 14 segment is below: 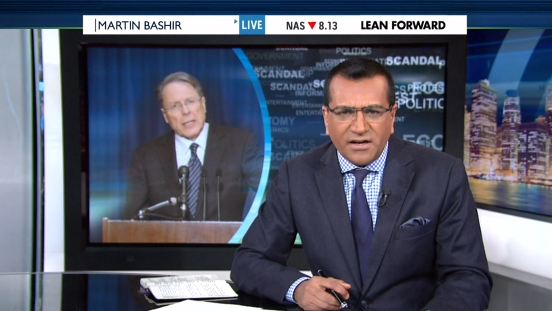 MARTIN BASHIR: It's time, now, to clear the air and as the gun lobby has armed its barricades since that horrific shooting at an elementary school in Newtown, one of the arguments that they continue to use against any kind of regulation is to unashamedly invoke the name of Adolf Hitler. Supporters of the NRA say that history proves that tyrannical leaders begin by robbing law abiding citizens of their firearms. In his book, Guns, Crime and Freedom, Wayne LaPierre says this: "Each year we solemnly remember in sorrow the survivors and those lost in the Holocaust, but the part gun registration and gun confiscation played in that horror is seldom mentioned. In Germany, firearm registration helped lead to the Holocaust." And so with that theory being promoted by the NRA, we've seen the most abject and abhorrent suggestion that the President of the United States is somehow the equivalent of Hitler for asking Joe Biden to lead a task force on gun violence. This was a recently constructed home page on the Drudge Report, which was vocalized vaingloriously by this gentleman.

BASHIR: Unfortunately, Monsieurs. LaPierre and Jones are being historically inaccurate, because the suggestion that Hitler promoted gun control is actually pretty wide of the mark. In fact, gun control was forcibly imposed upon Germany following the treaty of Versailles after the first World War. In 1919, the Reichstag enacted regulations which asserted that "all firearms as well as all kinds of fire ammunition are to be surrendered immediately." But thereafter the German government began to liberalize these Draconian laws. In 1928, the law explicitly revoked the 1919 law, introducing permits and a licencing scheme for weapons and ammunition

And then in1938, Hitler and the Nazis produced new law that is really loosened the regulation. The weapons law of March 18, 1938, completely deregulated the acquisition and transfer of rifles, shotguns and ammunition. It extended those who could be exempted from an acquisition permit to include hunters and all members of the Nazi Party. It lowered the age at which firearms could be acquired from 20 to 18. And it also extended the life of gun permits from one year to three. Of course, for a nation hell bent on genocide, Hitler did not allow the Jews to possess firearms, but virtually everyone else was free to do so, which I guess turns this story on its head. Because if anyone deserves to be equated with Hitler on the issue of firearms, then it's not the President. It's the NRA.