Matthews Touts His Obama-Loving Doc, Proclaims Media Will Be Watching Ryan for Lies

Chris Matthews appeared on the Labor Day edition of the Today show to promote his fawning new documentary, Barack Obama: Making History. (The subtitle for MSNBC's special on Romney was much more restrained: "The Making of a Candidate.") The liberal host also insisted that, "from now on," the media will watch Paul Ryan for lies. [See video below. MP3 audio here.]

Today reporter Carl Quintanilla and Matthews sounded like an echo chamber. Quintanilla tossed this softball: "...But there was a lot of criticism about [Ryan's] convention speech, Chris. Some said he actually made false statements in the course of it. Does that damage his credibility?" The liberal cable anchor, naturally, agreed that it did.

Matthews slammed, "I think [Ryan] came in as an Eagle Scout and he lost a few merit badges. I think he's going to be watched very carefully by the media from now on in terms of his facts." (As they do with Obama?)

He continued, "That plant, that GM plant, closed under W's watch, not under Obama's."

Of course, Matthews, among others in the media, have misrepresented what the Republican said about a plant that closed in Janesville, Wisconsin.  As the Examiner explained:

Since the end of the RNC Convention and continues today, democrats, liberals and surprisingly, a republican state that Paul Ryan blamed President Obama for a GM factory closing in Janesville, Wisconsin when the factory was scheduled to close prior to Obama taking office.

Problem is; Ryan never said that but referenced a campaign “promise” that was stated by then candidate, President Obama in 2008.

What Paul Ryan had noted was that Obama had failed to keep his promise to autoworkers in his hometown of Janesville, Wisconsin. Wisconsin GOP Gov. Scott Walker also stated the same thing.

A transcript of the September 3 segment, which aired at 7:41am EDT, follows:

CARL QUINTANILLA: Back now at 7:41 with more on the battle for the White House. The Democrats get their moment in the spotlight with their convention in Charlotte this week. Chris Matthews is the host of MSNBC's Hardball, and he is there. Good morning. 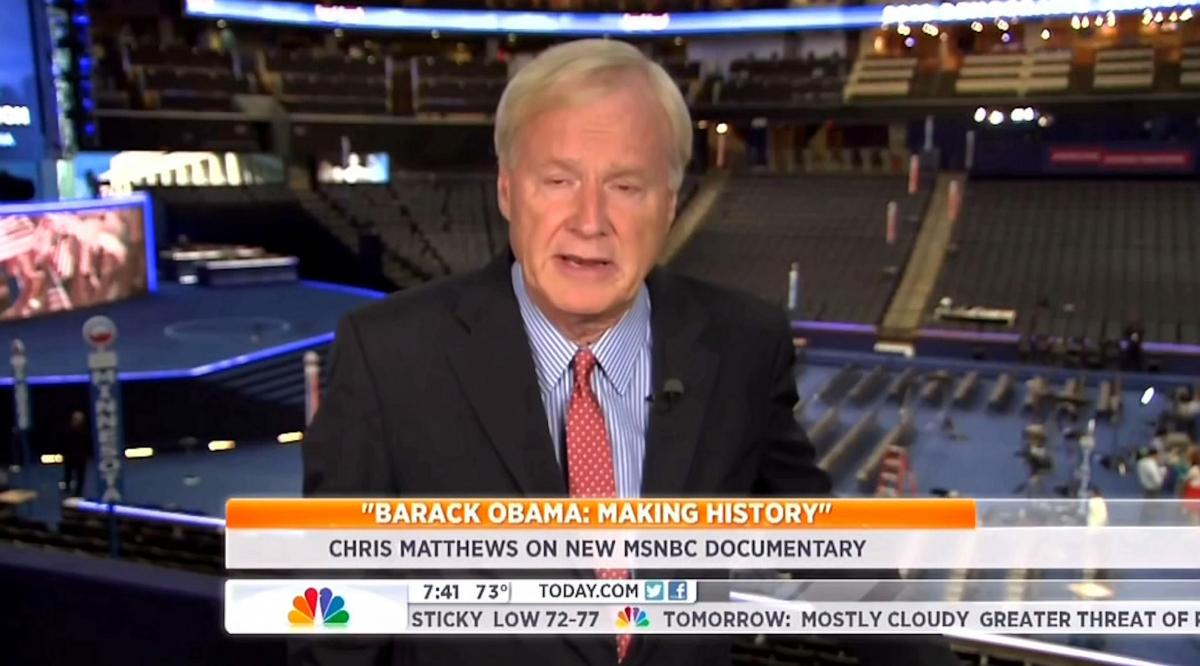 MATTHEWS: They will have to, because I think after all of the debate you and I will be covering for the next two months about the past, the election is about the future. And Obama has to get people to double down on him. He has to convince them it's going to get better the next four years than the past four years. It's all about the future.

QUINTANILLA: I want you to take a moment and look back at last week as well. Paul Ryan brought his conservative credentials to the ticket, but there was a lot of criticism about his convention speech, Chris. Some said he actually made false statements in the course of it. Does that damage his credibility?

MATTHEWS: Yeah. I can't -- I think he came in as an Eagle Scout and he lost a few merit badges. I think he's going to be watched very carefully by the media from now on in terms of his facts. That plant, that GM plant, closed under W's watch, not under Obama's. He did walk away from the debt commission, Simpson-Bowles, before the President walked away from it. So, there was some whole truths that were missing, and some half truths. I think he'll have to be very careful down the road here.

QUINTANILLA: Who ended up being the true star, in your view, Chris of Tampa: Christie? Ryan? Eastwood? Romney?

MATTHEWS, laughing: Oh, come on. Not Eastwood. Mitt Romney, I think, not only did a competent performance, he did a very good performance. I think that's going to give him a lot of confidence going into the first debate in October, the fact that he did so well. I think he had tremendous faith in the words he was speaking. He spoke them slowly. There's an economy of words he used. He knew what he was saying was going to work. It was going to get an applause. I think that confidence is going to build towards the first debate.

QUINTANILLA: Chris, let's talk about this documentary that's airing on MSNBC tonight. You actually return to 2004 when a lot of Americans got their very first look at Barack Obama, and the speech that ended up introducing him to the nation. Let's take a listen.

Clip of OBAMA 2004 convention speech: The pundits like to slice and dice our country into red states and blue states, red states for Republicans, blue states for democrats. But I've got news for them, too. We worship an awesome God in the blue states, and we don't like federal agents poking around in our libraries in the red states.

Someone who sounds like DAVID AXELROD from MSNBC documentary: All around us there were people who were crying. And halfway through, I thought this guy's life is changed and it will never be the same.

QUINTANILLA: Chris, I want you to compare the Senator who gave that speech to the man who is in the Oval Office now.

MATTHEWS: Well, a lot of experience behind him now. He's been President for four years. He caught bin Laden, he dealt with the financial crisis, he passed the first ever health care bill, which people have been fighting for since Teddy Roosevelt's time. A lot of history has already passed. And I think what I'm trying to do tonight in the hour-long documentary, is to give people a sense of, if this was all there was to Obama, what's passed, what was done now, where would he go in the history books? I wanted to give a really good accounting where we stand now that gives us a better perspective than just the day to day reporting.

QUINTANILLA: Do you believe he can exceed the impact he made in '04 and '08.

MATTHEWS: Well, that's a helluva high bar, Carl. I would say it's impossible to do that. But the word 'hope' is still imporant. As I said, we will debate about Bain Capital, we will debate and cover the questions of how we're doing with the economy. But it all comes down to direction.

Two great poll questions we ask at MSNBC: "Are we headed in the right direction?" That's tough for Obama. "Does this guy care about people like you and me?" That's tough for Romney. So they both face tough challenges. Neither one is the complete candidate right now, in terms of caring about us and being able to fix our problems. We haven't found Mr. Perfect, yet, in either of these candidates.

QUINTANILLA: Alright, Chris, the President speaks late Thursday night. First thing Friday morning, we're going to get job numbers for August. How much of his re-election chances pivot around those numbers.

MATTHEWS: If he gives a barnburner, Carl, 10:30 Thursday night, and then we get a higher unemployment rate on Friday, that will crush his bounce. If, however, there's some good news, like, say -- well, you cover the economy -- say 200,000 new jobs in the previous month, that will help his speech rise even higher. So I think it really has to be a double-two punch, a double punch for him. He needs a good speech, and he needs some good economic news Friday morning. You're dead right.

QUINTANILLA: And, finally, Chris, do improving jobs numbers -- are they a liability for Romney or is there a counter argument to that?