Robin Roberts Awed by Obama's Gay Marriage Stand: I Get 'Chills' When I Hear It

Good Morning America's Robin Roberts on Thursday made little effort to hide the excitement she felt when Barack Obama came out in support for gay marriage. Touting her exclusive interview with the President, Roberts marveled that, just talking about it, "I'm getting chills again." She added that the moment "was not lost on anyone" who was in the White House, Wednesday.

Co-anchor George Stephanopoulos hyped the "watershed moment." Roberts deemed it to be the President's "historic stand." During the GMA segment, she offered several softball questions, including one about Mother's Day. On people who might actually oppose gay marriage, Roberts could only manage: "You realize there are going to be some people that are going to be saying [you made this decision for political gain]. Do you see where some people might consider that the same thing?"  [See video below. MP3 audio here.]

Roberts made no mention of the fact that one in six campaign bundlers for the President are gay. In fact, she hardly challenged him at all.

The journalist  insisted that the interview was one of a "full range" and that she asked Obama about issues such as terrorism. The ABCNews.com transcript proves this is true, but terror questions didn't air on GMA or the previous night's World News or Nightline.

What did Roberts find time for? Her GMA interview featured this question: "Mother's Day, Sasha and Malia. Do you have plans for Mrs. Obama?"

The co-anchor also focused on light-hearted video of the President walking off Air Force One without Mrs. Obama, then going back to get her. Clearly, there wasn't enough time for a substantive discussion on critics of gay marriage.

In fact, on Tuesday, Jake Tapper grilled the White House on the President's "cynical" gay marriage dodge. ABC refused to air the questions.

Since the arrival of George Stephanopoulos, Roberts has had few political interviews. During the 2008 campaign and Obama's first year in office, however, she talked to the President a number of times. On September 9, 2009, Roberts breathlessly cooed, "How difficult is it to stay on message?"

On May 19, 2008, she asked Barack Obama if he was ready for the nasty attacks from the GOP?

A partial transcript of the May 10 segment can be found below:

ROBIN ROBERTS: And this morning, our interview with the President. Taking his historic stand on one of the most controversial this election years.

BARACK OBAMA: I think same sex couples should be able to get married.

ROBERTS: Brand new revelations not yet seen in our one-on-one conversation. And he answers the question: did the Vice President force his hand? It's an ABC News exclusive.

GEORGE STEPHANOPOULOS: Boy, do you know how to make a splash. A little news from the President yesterday. And, Robin, what a watershed moment. You know, whatever people think about this issue-

STEPHANOPOULOS: -and we know it's controversial, there's no denying when a president speaks out for the first time like that, it is history.

ROBERTS: And let me tell you, George- I'm getting chills again- because when you sit in that room and you hear him say those historic words, it was not lost on anyone that was in the room like that.

STEPHANOPOULOS: And you didn't know going in.

ROBERTS: You never know what he's actually going to say until you ask him and we did talk about other things as well. 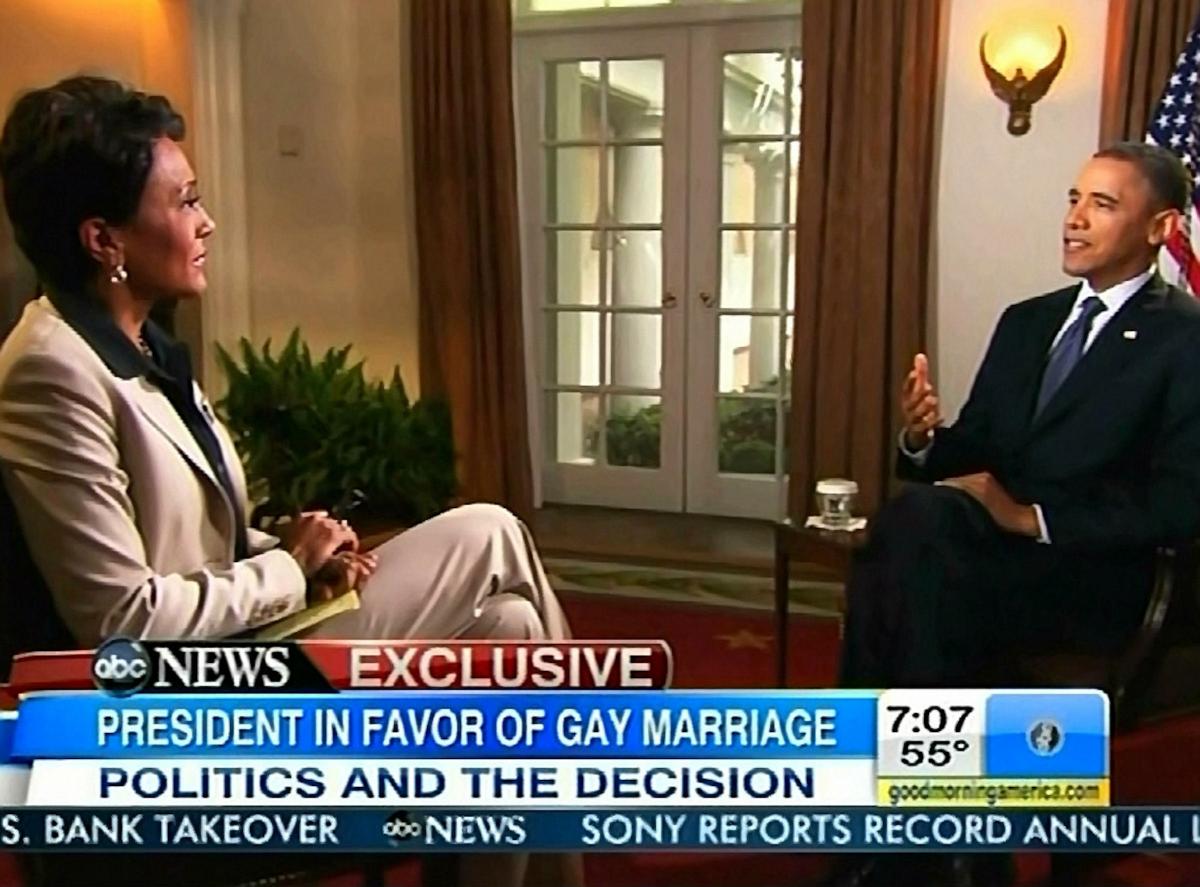 ROBERTS: But, as you said, George, it was a historic moment. President Obama saying in our exclusive interview that he is now in favor of same-sex marriage. He endorsed civil unions but opposed gay marriage during the 2008 campaign. And for the past year and a half, he indicated his feelings might have changed, especially in light of recent comments from top people in his administration. So, yesterday, at the White House, I directly asked the president this question: Mr. President, are you still opposed to same-sex marriage?

OBAMA:  I've been going through an evolution on this issue. And I had hesitated on gay marriage- in part, because I thought civil unions would be sufficient. But I have to tell you that over the course of several years, as I talk to friends and family and neighbors, when I think about  members of my own staff who are incredibly committed, monogamous relationships, same-sex relationships, who are raising kids together, at a certain point, I've just concluded that- for me personally, it is important for me to go ahead and affirm that I think same-sex couples should be able to get married. And I continue to believe that this is an issue that is gonna be worked out at the local level, because historically, this has not been a federal issue.

ROBERTS: But Mr. President, it's not been being worked out on the state level. We saw that Tuesday in North Carolina, the 30th state, in essence, to announce its ban gay marriage.

OBAMA: What I'm saying is is that different states are coming to different conclusions. I think it's important to recognize that folks who feel very strongly that marriage should be defined narrowly as- between a man and a woman- many of them are not coming at it from a mean-spirited perspective. You know, a bunch of 'em are friends of mine-- you know, pastors and-- you know, people who-- I deeply respect.

ROBERTS: Especially in the black community.

ROBERTS: And it's very- a difficult conversation to have.

OBAMA: But- but I think it's important for me- to say to them that as much as I respect 'em, as much as I understand where they're coming from- when I meet gay and lesbian couples, when I meet same-sex couples, it just has tipped the scales in that direction.

ROBERTS: A historic and controversial announcement he says is happening now, in part because Vice President Biden's revelation this weekend that he was absolutely comfortable with same sex marriage. Did he jump the gun a little bit here?

OBAMA: I had already made a decision that we were going to take this position before the election and before the convention. He probably got a little bit out above his skis, but out of generosity of spirit.

ROBERTS: So, you're not upset with anybody?

OBAMA: Would I have preferred to have done this in my own way? In my own terms without I think there being a lot of notice to everyone? Sure. But all's well that ends well.

ROBERTS: The President says one inspiration for his change of heart was close to home.

OBAMA: You know, Malia and Sasha, they've got friends whose parents are same-sex couples. It wouldn't dawn on them that somehow their friends' parents would be treated differently. It doesn't make sense to them. And- and frankly- that's the kind of thing that prompts-- a change of perspective. You know, not wanting to somehow explain to your child why somebody should be treated  differently, when it comes to the eyes of the law.