All three morning shows on Monday hyped a "bombshell blast" against Herman Cain, playing up a story in Politico charging the Republican presidential candidate with sexual harassment back in the 1990s. ABC's Good Morning America led with the allegations. 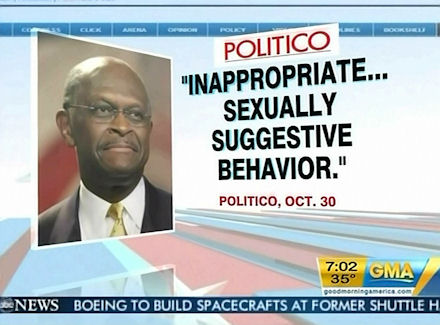 Only NBC's Chuck Todd on Today made sure to specifically note: "And we need to emphasize that NBC News has not independently confirmed these allegations."

CBS's Early Show mixed in the charges with an overall piece on Cain.

Reporter Jan Crawford began by oddly focusing on Cain's abortion position: "Now that he's a front-runner, he's facing increased scrutiny, especially when opponents question whether he would support abortion in some cases, like in the case of rape or incest."

Crawford also connected the allegations, linking, "...This reminds me of similar allegations that were levied just 20 years ago against Justice Clarence Thomas who, of course, was accused of sexual harassment himself."

She pointed out that Cain has predicted attacks against his character, relating, "[Cain] says he's read ready for the same- quote, 'high-tech lynching' that Justice Thomas said he received from the news media and the left."

Host Erica Hill weirdly described the allegations as occurring "several years ago," a rather loose term for events from the '90s.

GMA's Stephanopoulos interviewed Maggie Haberman, a co-writer of the Politico piece. The show gave the story the most play, leading off with it. Stephanopoulos did hit Haberman with some reasonable questions, pressing, "The sources are anonymous for the most part...Did you speak to the women involved?"

He added, "And, as I said, there were some board members on the record saying they knew nothing about this. How could that be?"

But he also teed up queries for Haberman, allowing her to expand on the claims: "You also say that there was documentation. Can you describe it and characterize the documentation?"

Stephanopoulos' previous career as a Democratic operative included squashing sexual harassment stories against Bill Clinton. On page 267 of his book All Too Human, Stephanopoulos recounted, "My goal was to put Paula Jones in the category as Connie Hamzy [who accused Clinton of propositioning her]- women whose stories were so suspect that their accounts couldn't be dignified by the media."

A transcript of the October 31 GMA segment can be found below:

GEORGE STEPHANOPOULOS: And this morning, bombshell blast, major allegations against front-runner Herman Cain. Two former female colleagues accuse him of sexual harassment. Did they take a big payout to keep quiet? We talk live to the reporter live who broke the story. 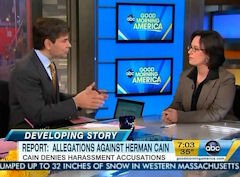 STEPHANOPOULOS: But, let's get right to the allegations against Herman Cain. The website Politico reporting late night that when Cain was head of the National Restaurant Association in the 1990s, two female employees complained about his inappropriate, sexually suggestive behavior. Politico adds that Cain's advances made them "angry and uncomfortable" and that they left the association after receiving monetary settlements. Maggie Haberman is one of the reporters who broke story. She joins us now. Maggie, thanks for coming in this morning. Herman Cain would not comment on these allegations. His spokesmen have denied it to the AP. And they sent us this statement. They did not want to appear on the show this morning. They call these unsubstantiated personal attacks. Quote, "dredging up thinly sourced allegations, political trade press are now casting aspersions on his character and spreading rumors that never stood up to the facts. Since Washington establishment critics haven't had much luck in attacking Mr. Cain's ideas to fix a bad economy and create jobs, they're trying to attack him in any way they can." You're response?

MAGGIE HABERMAN (Senior political writer, Politico): Uh, I think the story was extremely well reported and it really speaks for itself. We gave the campaign ten days to respond to this. They repeatedly did not directly address the specifics of this. And when one of my colleagues, Jonathan Martin, approached Mr. Cain directly yesterday. And he did not say these allegations are false. He didn't really even address it. So, I think the story is thoroughly reported and, again, I think it really does stand.

STEPHANOPOULOS: The sources are anonymous for the most part. You speak to some members of the board of the National Restaurant Association. They said they knew nothing about this. Did you speak to the women involved?

HABERMAN: You know, we spoke to many sources. I'm not going to specify who we spoke to. I think we spoke to a lengthy roster of people who were around the NRA at the time, former board members, former staffers, as we said in the story. But, I think I'm going to let the sources have protection.

STEPHANOPOULOS: Why can't you say you spoke to the women?

HABERMAN: Because, I think, people typically don't identify their sources. And I just think we're not going to do that here.

STEPHANOPOULOS: You also say that there was documentation. Can you describe it and characterize the documentation?

STEPHANOPOULOS: So, is this a settlement sheet?

HABERMAN: It was a formal resolution.

STEPHANOPOULOS: A formal resolution and this involved a payout to the women-

STEPHANOPOULOS: -if they would not speak in the future?

HABERMAN: There was language in the agreement of their separation from the NRA that they would not get into details of this.

STEPHANOPOULOS: You know, the language that you use, sexually suggestive inappropriate behavior," what exactly did Cain do?

HABERMAN: I think- I think it's a legitimate question. But, I think as we said in the story, there were, you know, gestures. There were comments. There were certain suggestive overtures. For instance, things that made these women uncomfortable, made them angry and made them feel as if it was untoward.

STEPHANOPOULOS: And they made formal complaints to the board?

HABERMAN: There were complaints made and there were specific allegations involved.

HABERMAN: To the NRA.

STEPHANOPOULOS: To the National Restaurant Association?

STEPHANOPOULOS: And, as I said, there were some board members on the record saying they knew nothing about this. How could that be?

HABERMAN: Uh, because I think when you have a large board, I think that, especially when you've got members all over the country, perhaps not everyone is aware of every specific action. Different corporations have different structures. But, again, as I have said, we reported this extremely thoroughly and feel confident in it.

STEPHANOPOULOS: So, you're confident the denial from the Cain campaign will not stand?

HABERMAN: I would be interested to see Mr. Cain has to say later today.

STEPHANOPOULOS: Maggie Haberman, thanks very much.

Update/Related: Be sure to read NB publisher Brent Bozell's statement about the media's attention to this story.