MSNBC's Bashir Compares Rick Perry to Putin: They Both 'Shoot to Kill'

To hammer the point home, pictures of the democratically elected Texas governor and Putin, the man who has suppressed journalistic freedom in Russia, appeared on screen. Bashir continued, "[Putin] shoots to kill. And where's Mr. Perry shirtless on horseback? We could hardly find a photo of him with a horse, for Pete's sake."

After clearly making the connection between the two men, Bashir backed off: "But, no, Perry is no Putin. Far from it."

Repeating the word "plinking," a gun term Perry used in a clip, Bashir offered himself cover: "[Perry] just plinks away at rivals, firing off at random."

Considering that a number of anti-Putin journalists have been murdered in Russia, it's a weird comparison at best to link that country's prime minister with the GOP candidate.

A transcript of the October 24 segment, which aired at 3:05pm EDT, follows: 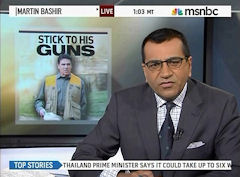 MARTIN BASHIR: But one thing that's perfectly clear is Rick Perry's deep, passionate, abiding love for guns. Call it "how the governor got his groove back." Heading out on the- on the hunt in Iowa and the man who carries a concealed weapon, who'd shoot coyotes in the face, well, he just couldn't help but bubble over with fondest affection for his firearm. 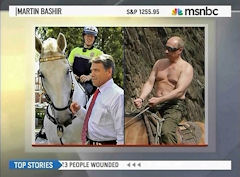 BASHIR: Now, plinking in case you were wondering is, basically shooting at tin cans and brickbat. And, yes, I'm afraid I did have to turn to Wikipedia for that definition. But, it's funny, isn't it, that Mr. Perry's wild west show calls to mind another world leader. Yes, Vladimir Putin. You can bet Putin doesn't plink around with his rifle. He shoots to kill. And where's Mr. Perry shirtless on horseback? We could hardly find a photo of him with a horse, for Pete's sake. But, no, Perry is no Putin. Far from it. He just plinks away at rivals, firing off at random. And, unfortunately, for his top rival, it appears Mitt Romney and immigration may be the latest tin can on the post.