Singling out Michele Bachmann and Ron Paul, Bashir chided, "...There are a large number of people in this country who find some of the beliefs and comments and commitments of these individuals to be, frankly, very, very difficult to accept." 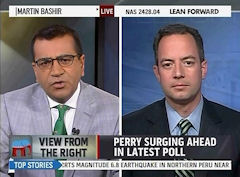 After Priebus suggested that the presidential election would be decided on the economy, not on issues such as evolution, the cable anchor pushed, "So, simply dismissing [comments by Bachmann and Paul], I don't think that's necessarily the most helpful thing, given that you have to win support to win the election."

This all arose after the RNC chair pointed out that Obama is either in a dead heat or trailing Rick Perry, Mitt Romney, Michele Bachmann and Ron Paul.

Bashir responded to the remark by trying to trap Priebus: "Michele Bachmann, who refers to gay lifestyles as a form of slavery and bondage, Rick Perry who dismisses much of the science surrounding climate change. Or how about Ron Paul who wants to decriminalize many of the most addictive and dangerous drugs?"

He added, "Which one of these do you prefer?"

Bashir also suggested that former Vice President Dick Cheney's new memoir would somehow be a drag for the 2012 GOP candidate, despite the fact that the book is out now and the election is 15 months away.

"How much of a problem is that," the host wondered.

A transcript of the August 25 segment can be found below:

MARTIN BASHIR: If your notion of leadership involves never apologizing, and never offering any regrets about the past, well, then you should get hold of Dick Cheney's autobiography entitled In My Time: A Personal and Political Memoir. In it the former Vice President stands by the use of enhanced interrogation techniques, including waterboarding. He says the U.S. should have bombed Syria in 2007, though no one agreed with him. He says there's no need to apologize for the president's statement that Saddam Hussein sought to by uranium from Niger, a claim that turned out to be entirely false. Cheney blasts Bush administration figures, saying CIA Director George Tenet quit when that Colin Powell quit when the going got tough and that Colin Powell's resignation was for the best. Indeed, the former Vice President tells NBC News that in an exclusive interview that his memoir will make heads explode all over Washington.

DICK CHENEY: Do you think President Bush will feel betrayed that you have revealed these private conversations?

JAMIE GANGEL: I don't know why he should.

REINCE PRIEBUS: Hey, Martin. How are you?

BASHIR: Very well. Thank you for joining us. Before we are scrutinizing the current Republican field, just how much of a problem it is for you as you seek to corral the party around the potential candidate for next year's presidential election when you have got the former Vice President soaking up a vast amount of attention with the memoir, continuing to support interrogation techniques that some regard as torture, offering his view that Syria should have been invaded and never once, despite all of the attendant problems with Iraq, offering any regret. How much of a problem is that?

PRIEBUS: Well, it is no problem. I haven't read the book, Martin. It just came out. You all have a exclusive, so I haven't seen anything, and so certainly, I will be interested in reading the book and perhaps in a week that might make a better question. But as I sit here right now, I have nothing to say about it, because I haven't read anything. I'm hearing what you are saying for the first time.

BASHIR: Right. And you are not overly concerned about the fact that this is coming in at this precise moment?

PRIEBUS: No, not at all. You know, here is the thing, I mean, the Republicans, conservatives and for that matter the intelligence communities around the world have immense respect for the Vice President. I mean, he's a man of an enormous accomplishment, and he is very intelligent and smart, and I expect it to be a great book and I look forward to reading it.

BASHIR: Indeed. Now, Rick Perry is surging in the latest polls, and which of the current candidates do you feel, and I wonder if I can ask you this, is most likely to pose a serious challenge to President Obama, which of them?

PRIEBUS: That's another good one. Well, I mean, I don't want to get into singling them out, but I will tell you that you have obviously seen the polling this week that shows that, I think, four or five of them being polled are all within the margin of error which included Rick Perry, Ron Paul, Mitt Romney and Michele Bachmann.

PRIEBUS: I may be missing somebody, but what it more spells, Martin, is trouble for this President. I mean, literally, we have a president in his third year that is losing to almost any Republican that is being polled right now, and what that really says is that the American people are really looking for a change, and now it is incumbent on us, Martin to, provide to the American people an intelligent and articulate alternative to a President that the American people are willing to fire. They are willing to fire him, but now we have to put quality on the field on our end, and make sure that we can get our candidate over to the finish line and that's what I'm working on every day.

BASHIR: Indeed. And that's really why I want to be specific with you, because, I mean, for example-

BASHIR: Michele Bachmann, who refers to gay lifestyles as a form of slavery and bondage, Rick Perry who dismisses much of the science surrounding climate change. Or how about Ron Paul who wants to decriminalize many of the most addictive and dangerous drugs? Which one of those do you prefer?

BASHIR: With- with, with, with respect though, sir, there are a large number of people in this country who find some of the beliefs and comments and commitments of these individuals to be, frankly, very, very difficult to accept.

PRIEBUS: I'm sure there are.

BASHIR: So, simply dismissing those, I don't think that's necessarily the most helpful thing, given that you have to win support to win the election.

PRIEBUS: My point is that at the end of the day, those are not, though, going to be the issues to determine who the next president is. What is going to determine who is the next president is where is this economy? Where are the jobs and whether or not this President, and in regard to those big issues, either followed through on his promises or performed well according to the American people. And I would, I would venture to guess at this point, and especially the polling indicates as much that the American people are going to say no to President Obama for a second term, and that is really going to be what determines this election and that is how I feel about it and that is what the polling suggests, Martin.

BASHIR: Indeed. A final question, Mr. Priebus, you won't be drawn on those formally in the ring, formally announced and running. What about a woman who continues to rise, in terms of her public profile, makes regular appearances, makes comments that seem to play in the public space, Sarah Palin, would you like to see her run?

PRIEBUS: You know, I wouldn't mind one way or another, Martin. I think that she is an important voice-

BASHIR: Really? You wouldn't mind one way or the other?

PRIEBUS: I happen to think it is up to her, Martin. I happen to believe and I have said this many times, I think that having a big primary is a good deal for us. I think it gets all of the talk on our side and the horse power is on the Republican side of the aisle and all of the candidates are competing for air space, for time for your show, for print media, and I think that it puts all of the horsepower on our side. And again, I come back to what I said before, it is incumbent on us to provide alternatives to the American people to a President that has driven this country into the ditch. And so, if Sarah Palin wants to get into the race, that is great. That is her decision, but, you know, I really have no way of knowing what she is going to do, I really just don't. It is up to her, and I don't have any insight on that.