For the second time in less than six months, Good Morning America offered 9/11 truther Jesse Ventura a platform to hype his conspiracy theories and smear the U.S. government as "Nazi." This occurred on the same day that GMA reporter Bianna Golodryga hit Republicans for having connections to birthers and wondered when the President will "fight back" against such charges.

In contrast, although co-host George Stephanopoulos did press Ventura on his conspiratorial beliefs, he also joked around with the former Minnesota governor. At one point, he fawned, "You've had such a varied career. You were even once on a soap opera. Young and the Restless." Stephanopoulos then played a clip of the former politician on that show.

Ventura appeared on GMA to promote his book 63 Documents the Government Doesn't Want You to Read. He slammed the U.S. government by attacking, "There are dedicated, patriotic people in government, but when you read this book, the scary part of this book for me, you could substitute the word Nazi and it would work." Stephanopoulos just moved on to his next question. 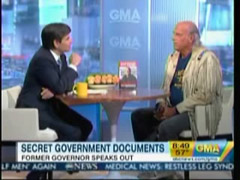 In fairness, the GMA anchor did grill Ventura. At one point, he sputtered, "I [have] a hard time believing that you actually believe" 9/11 conspiracy theories. Stephanopoulos challenged the actor over his contention that Osama bin Laden wasn't involved in the attacks on the World Trade Center

Yet, why does ABC giving Ventura opportunities to promote such claims? Stephanopoulos hosted the former wrestler on October 13, 2010 and asked similar questions, including "I was struck, you know, you're looking at all kinds of different conspiracies, but I was struck especially by something you said that, about 9/11...You say that many clues that are out there, have not been, would lead you to different conclusions."

A transcript of the April 4 segment, which aired at 8:50am EDT, follows:

GEORGE STEPHANOPOULOS: But, let's get right into to it.

STEPHANOPOULOS: Because we talked about this a little bit your last time on the show as well. This whole idea that you have some documents which you say at least reinforce the idea that the government has advance knowledge that 9/11 could happen-

STEPHANOPOULOS: -and didn't work to stop it. Now, I find a hard time [sic] believing that you actually believe that.

VENTURA: Why? They- I'm a Vietnam veteran and they lied to me about the Gulf of Tonkin incident and that was the false flag operation that put us into the Vietnam War where 58,000 of my generation were killed. And now, I was teaching at Harvard when McNamara came through and admitted it never happened. False flag operations, if you go through history, happen all the time before these wars.

STEPHANOPOULOS: But, that's very different from saying that the government knew 9/11 was coming, knew the planes were coming and didn't try to stop it.

VENTURA: Well, take a look at my book. It's no more shocking than our government going down to Nicaragua and infecting hundreds of people with syphilis to see if penicillin works. George, let me state this, there are great people that work in government. There are dedicated, patriotic people in government, but when you read this book, the scary part of this book for me, you could substitute the word Nazi and it would work.

STEPHANOPOULOS: But, the documents you use on 9/11 show- There's one document that suggests that tower seven fell down faster than it could have fallen just by natural-

VENTURA: It doesn't suggest it, it says it. It said it fell at free fall-

STEPHANOPOULOS: So, then you say-

VENTURA: Wait a minute. That means you gotta defy the laws of physics. That means that everything was removed in which for anything to fall at free fall-

STEPHANOPOULOS: But you make that leap to then the idea that it was demolished by explosives inside by the government.

VENTURA: I don't make- I don't make a leap. Why didn't they check for explosives- they never did- if not to eliminate them? They didn't do that. This book, this book is all documents that are all out in the public domain. I'm not Wikileaks. I didn't steal anything. You just gotta find them and there are documents here so disturbing, like the CIA's assassination manual. Excuse me? Assassination is just a nice word for first degree murder. And we have a manual that tells how to do it and everything about it? As far as I know, George, first degree murder is illegal in every country in the world.

STEPHANOPOULOS: But, aren't there some cases where it would be justified? A tyrant who is killing hundreds of thousands of people?

VENTURA: Who makes the call? I'll say this too about, if we go back to bin Laden, why haven't we indicted him? That gives us reason to go get him. We haven't indicted him. The government has never come forward, convened a grand jury, presented one shred of evidence that he did it, officially and get an indictment.

STEPHANOPOULOS: So, you don't believe he was behind it either?

VENTURA: I don't know. But my government has lied to me so often, they've lost their credibility with me, George.

STEPHANOPOULOS: And you do have the documents you say support some of these theories.

VENTURA: Well, and the good thing about this book, it's not me telling you about the documents. I give you my opinion. But then we reprint every document, so the reader can read for themselves.

STEPHANOPOULOS: I want to switch gears. You've had such a varied career. You were even once on a soap opera. Young and the Restless.

[Cut to clip of Young and the Restless where Ventura is talking about running for President.]

VENTURA: I will tell you this, if Ron Paul runs as an independent, I would give great consideration to being his running mate. As you see, I dedicated this book to Congressman Ron Paul.

VENTURA: Never. I will not be a Democrat or a Republican. They are the problem not the solution. We need to abolish political parties in this country.

STEPHANOPOULOS: You got a couple Republicans coming from your state, Michele Bachmann and Tim Pawlenty.

VENTURA: Well, Michele Bachmann is actually my congresswoman. I live in her district.

STEPHANOPOULOS: And? Could she be president?

VENTURA: Not with my vote she won't be. [Laughs.]

STEPHANOPOULOS: Okay, Jesse Ventura. Thanks very much for coming and giving your candid views this morning.