In a segment totaling just two and a half minutes on Monday, Good Morning America's Bob Woodruff managed to feature eight clips of pro-union protesters in Wisconsin and only two supporting Scott Walker, the state's Republican governor.

Covering the ongoing battle over whether or not the state will limit collective bargaining for public sector employees, Woodruff appeared quite impressed by the scope of the rallies: "There's going to be protesters coming out here today for the seventh day in a row. It's an amazing weekend. About 70,000 actually showed under here."

The GMA correspondent repeatedly highlighted those on the side of the union and portrayed Scott Walker as inflexible: "Making themselves at home, the protesters say they're prepared to make concessions but the Governor so far is refusing to budge." One demonstrator complained, "We are willing to negotiate. But do not take away our rights."

Woodruff also featured no less than three clips of Democratic state senators, discussing why they fled Wisconsin to prevent a vote on the proposed legislation. Of the ten total snippets, eight supported the union and only two opposed.

The pro-Walker protester asserted, "We're here to show support for Governor Walker. We want the Democrats to show up back for work. Elections have consequences."

But, Woodruff certainly downplayed the anti-union sentiment in comparison to supporters. He didn't mention that the Tea Party is protesting in Madison, Wisconsin.

On Friday, GMA's Chris Bury allowed five clips of those protesting Walker and just one in support.

A transcript of the February 21 segment, which aired at 7:09am EST, follows:

ROBIN ROBERTS: But, in Wisconsin, the two sides show no signs of backing down in that huge budget battle. Protesters camping out in the state capitol. Democratic legislators hiding out to avoid voting on a measure that would strip public employees of their collective bargaining rights. Bob Woodruff has the latest and joins us this morning from Madison. Good morning, Bob. 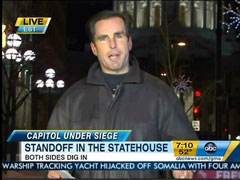 BOB WOODRUFF: Well, good morning, Robin. There's going to be protesters coming out here today for the seventh day in a row. It's an amazing weekend. About 70,000 actually showed under here. The schedule today, two more rallies happening. Whether the weather has an impact, we don't know yet. But, they say they're going to stay in the statehouse until the governor gives up.

FEMALE PROTESTER: What do we do?

SECOND FEMALE PROTESTER: Talk to us.

MALE PROTESTER: This is so simple. That's all we want them to do.

WOODRUFF: They've been marches inside the rotunda with music and megaphones.

WOODRUFF: Making themselves at home, the protesters say they're prepared to make concessions but the Governor so far is refusing to budge.

THIRD FEMALE PROTESTER: We are willing to negotiate. But do not take away our rights.

WOODRUFF: Supporters of the Governor were out in force, too, this weekend, trying to get their message heard.

WALKER PROTESTER: We're here to show support for Governor Walker. We want the Democrats to show up back for work. Elections have consequences.

WOODRUFF: Those Democratic senators who went on the lam to avoid a vote on the bill called for a very unusual photo-op in the stairwell of an aging hotel in an undisclosed location in Illinois.

STATE SENATOR FRED RISSER (D-WI): We want to slow up the p process. And the reason we have left the state temporarily is to give the people of the state a chance to realize what our Governor is doing.

STATE SENATOR JULIE LASSA (D-WI): I am teaching my daughters who are six and three that it is very important to do what you can to help your neighbors when people need help.

WOODRUFF: They vow to stay out of the state until Governor Walker signals a willingness to negotiate.

WOODRUFF: You know, these senators are taking radical steps to hide their locations. They wouldn't even allow us to take pictures of their vehicles so they cannot be found.