After Linking Conservatives to Hateful Rhetoric, NBC Skips Dem Who Compared the GOP to Nazis

After spending close to two weeks bemoaning the state of political dialogue in America and wondering about its connection to the shooting of a Congresswoman, NBC has, thus far, completely ignored a Democratic Representative comparing the Republicans to Nazis and the Holocaust.

On Wednesday, Tennessee Congressman Steve Cohen smeared, "They say it's a government takeover of health care. A big lie, like Goebbels...The Germans said enough about the Jews, and the people believed it and you had the Holocaust." Both ABC and CBS reported the story, but NBC skipped it on Wednesday's Nightly News and on Thursday's Today show.

Yet, on January 10, 2011, NBC's Andrea Mitchell warned, "While there is no evidence [Sarah Palin's] Web site featuring a target on Giffords' district had anything to do with this attack, some are asking if today's political rhetoric is inspiring the lunatic fringe?"

On Wednesday's Today, Today co-host Meredith Vieira hectored Glenn Beck: "I mean there are people who've criticized you and said...you're part of the problem in terms of anger...you've added to this dialogue of hatred."

In his speech, given on the floor of the House of Representatives, Representative Cohen compared the GOP position on health care to that of Nazi propaganda minister Joseph Goebbels. Considering the NBC's focus on the subject of hateful words, wouldn't this have been an important story to mention? 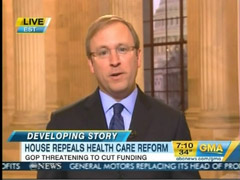 Over on ABC, Jon Karl discussed the remarks on the Wednesday World News and the Thursday Good Morning America. Co-host Robin Roberts chided, "It's never a sign of civility to compare your opponent's tactics to those of the Nazis. But that is exactly what one Democratic congressman did."

Karl then explained, "Last night, the Anti-Defamation League condemned Congressman Cohen's words. Saying, quote, that 'invoking the holocaust and the Nazi effort to exterminate the Jewish people is offensive and has no place in civil political discourse.'"

A CBS reporter referenced the comments on the Wednesday Evening News, but not Thursday's Early Show. Nancy Cordes observed, "A tentative agreement to tone down the rhetoric was shattered when one Democratic likened Republican claims about the law to Nazi propaganda."

A transcript of the January 20 GMA segment, which aired at 7:10am EST, follows:

ROBIN ROBERTS: Politics, as you know, was put on hold in Washington, in the aftermath of the Tucson shootings. But the new civility seems to be at an end. In the House, voting Wednesday to repeal the health care law and the debate, at times, was, really, not so civil. Jonathan Karl has more. He joins us from the Capitol this morning. Good morning, Jon.

JON KARL: Good morning, Robin. It's never a sign of civility to compare your opponent's tactics to those of the Nazis. But that is exactly what one Democratic congressman did. The Republicans hailed the vote, as a promise kept.

REP. MIKE PENCE (R-IN): Today, House Republicans are going to stand with the American people and vote to repeal their government takeover of health care, lock, stock and barrel.

KARL: Repeal will hit a brick wall in the Senate. But Republicans made it clear, they won't stop there.

KARL: Their next plan of attack, starve health care reform of funding. For example, no money for IRS agents needed to implement the law's tax provisions. The debate was, for the most part, civil. But one Democratic Congressman accused Republicans of using Nazi-like tactics to make their case.

KARL: Last night, the Anti-Defamation League condemned Congressman Cohen's words. Saying, quote, that "Invoking the holocaust and the Nazi effort to exterminate the Jewish people is offensive and has no place in civil political discourse." Robin?

ROBERTS: Jon, has the Congressman apologized at all?

KARL: Absolutely not. In fact, he is standing by his words. And says that he has no intentions of apologizing.