Over a span of five days and three programs, ABC donated 24 minutes of coverage to Ron Reagan's new book and the allegations that his father had symptoms of Alzheimer's while being President. On Tuesday, he appeared on Good Morning America for almost eight minutes of promotional coverage.

Guest co-host Elizabeth Vargas teased the segment by proclaiming, "Coming up in just a moment, new revelations about President Reagan and when he developed Alzheimer's." Wouldn't "allegations" have been the fair way to describe the claims of Ronald Reagan's liberal son?

In addition to appearing on Tuesday's GMA, the book was discussed on the Monday, Sunday and Saturday edition of the program. Vargas interviewed Ron Reagan for almost nine minutes on Friday's 20/20. Additionally, World News anchors highlighted the insinuations on Friday, Sunday and Monday. The grand total comes out to 24 minutes and 12 seconds of interviews or coverage. 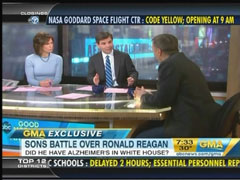 On Tuesday, Vargas asked a question she skipped on Friday's 20/20 she finally wondered, "How do you respond to the people who say, Ron Reagan is not a doctor?" She added, "I mean, you are not equipped to recognize possible early signs of Alzheimer's...and you shouldn't be speculating."

Regarding outrage from brother Michael Reagan that Ron is an "embarrassment," co-anchor George Stephanopoulos gently queried, "So, what do you say to Michael?"

However, Stephanopoulos did offer this tough question: "When you look back, because so much of the public felt they had such a personal connection to him. Do you think there's anything on your side you could have done to make that connection with him?"

Yet, Ron Reagan's allegations about his father were couched with qualifiers, such as this one: "...In retrospect, given what we know, it's a reasonable supposition that [he might have had early symptoms.]"

So, perhaps, during ABC's five day deluge of coverage, tougher questions should have been asked from the start.

A transcript of the January 18 segment, which aired at 7:30am EST, follows:

VARGAS: Coming up in just a moment, new revelations about President Reagan and when he developed Alzheimer's. His son Ron Reagan joins us to talk about his new book and, boy, is it controversial.

GEORGE STEPHANOPOULOS: But, first, this February 6th will mark the 100th anniversary of former President Ronald Reagan's birth. An event the family will mark along with the former President's loyal followers. But it might be tough getting the whole Reagan family in the same place, thanks to a family feud that's erupted between his sons, Ron and Michael. It started after Ron told Elizabeth Vargas what he wrote in his book, My Father at 100, that he believed his father had early symptoms of Alzheimer's in the Oval Office. Michael responded in a flash on Twitter, accusing him to sell out his father to sell books. In an interview with Sean Hannity Monday, Michael Reagan did not back down from his cutting remarks.

MICHAEL REAGAN: Where's the backup for what Ron is saying? And it's just sad this debate has started, when, in fact, my father accomplished so much in the last four years of his presidency.

STEPHANOPOULOS: Over the weekend, Michael also tweeted, "My brother was an embarrassment to my father when he was alive. And today, he became an embarrassment to his mother." Ron Jr. says it was his performance in a 1984 debate that first made him wonder about Alzheimer's. And he told Elizabeth Vargas that he even counseled his father not to run for re-election.

RON REAGAN JR: Now, partly, that was because I didn't want somebody shooting him again. That was certainly true. There was something that was off. I couldn't quite put my finger on it.

STEPHANOPOULOS: President Reagan was diagnosed with Alzheimer's in 1994, five years after leaving office. But in 1980, before being elected at age 69, candidate Reagan contemplated potential health problems. Telling The New York Times, "If I were President and had any feeling at all that my capabilities had been reduced before a second term came, I would walk away. Son Ron agrees, writing, had the diagnosis been made in, say, 1987, would he have stepped down? I believe he would have." And Ron Reagan joins us again right now. So, you haven't said anything since Michael spoke out over the weekend.

REAGAN: No, no. The feud is really one-side, I believe. I think there's some confusion here and some misunderstanding between Alzheimer's the disease, and dementia, which is a symptom of Alzheimer's and shows up in the later stages. What I've- what I've deduced, given what we now know about Alzheimer's, that it is a disease that's a process that takes place over years and decades, even, before actual symptoms arise is that, given when he was finally diagnosed, and given what we now know about Alzheimer's, it's a simple deduction to say that the disease must have been present when he was in office. I did not say- in fact, said exactly the opposite- that I did not see symptoms of dementia or anything like that while he was in office. The worries that I talked about with you and mention in the book-

STEPHANOPOULOS: But the early signs you saw. You were seeing little clues.

REAGAN: I had no- no. I wasn't thinking, "Gee, I am seeing signs of Alzheimer's here." I was hypersensitive, of course, to somebody I know very, very well. He had already been shot and nearly killed. He's in his mid 70s. He's in the toughest job of the world and I worried about him all the time, for all kinds of reasons.

VARGAS: You're likened it to a parent who doesn't know something is wrong with his or her child.

REAGAN: Something I would occasionally, I would notice and I would wonder, "Gee, why is there a hitch in the giddy-up," as I put it to you. But, I had no idea what it was and I can't say definitively that I was seeing a sign of Alzheimer's. It could have been anything. I mean, again, he was shot and clearly killed.

VARGAS: Well, you did tell me that because of what we now know about Alzheimer's, now you're sure that what you were seeing was the precursors of Alzheimer's.

REAGAN: No, I didn't say that I was sure. I said that in retrospect, given what we know, it's a reasonable supposition that that might have been the case. I can't diagnose-

STEPHANOPOULOS: So, what do you say to Michael?

REAGAN: I don't get into inter-familial squabbles in public. I just think that's a bad idea.

STEPHANOPOULOS: [Laughs] You have before.

REAGAN: No, not really.

VARGAS: But, Were you expecting this reaction?

REAGAN: Not really. I hadn't really thought what Mike might say. The bit about embarrassment to your mother, that's a little strange. I just spoke to my mother last night.

STEPHANOPOULOS: What did she say?

REAGAN: She didn't mention embarrassment. Well, I asked her. I knew this was all- she was worried about me. She said, "Are you all right? Yeah. I'm fine. But they're going to ask me what you think of the book. So, what should I say to them?" And she said, "You tell them that I've read it. I loved it. It made me cry and I'm very proud of you."

STEPHANOPOULOS: Can't do better than that. How is she doing?

VARGAS: I want to get back to one of the other revelations in the book that you talked about the people, that people have been talking about, which is when your father fell off the horse in Mexico shortly after he left the Oval Office. You say in the book he had brain surgery.

VARGAS: And people seized on that. You say they opened up the skull, quote, "to relieve pressure on the brain." You say that happened in San Diego.

REAGAN: Yes, they did. No- I made a- This was a fact that I got wrong and we caught it too late. The book had gone to the printer. It was actually Tucson. In my mind, it was San Diego. But it was actually Tucson. And it was the second stop he made two stops at a hospital. First in Tucson, where they just kind of patched him up after he was thrown from the horse, I should say. And then, two months later, he went to the Mayo Clinic. And there is where they burrowed a hole in his skull to relieve pressure on the brain. that was the first suspicion, the first time that anybody in the family heard suspicions of Alzheimer's that was when it was broached. We'll do tests in a year. And see where we are then. After a year, more suspicion. A little hard to make a definitive diagnosis of Alzheimer's back then without actually doing brain surgery.

VARGAS: But, when people say there were no signs of it. He didn't have a shaved head.

REAGAN: Yes, he did.

VARGAS: There wasn't stitches. So, you're saying he had that and it just wasn't made public?

REAGAN: No. There are photographs that exist of him taking his hat off on his way up the steps to an airplane, with his head shaved on one side. And that's what I referred to in the book is that procedure to relieve pressure on the brain.

VARGAS: How do you respond to the people who say, Ron Reagan is not a doctor?

VARGAS: I mean, you are not equipped to recognize possible early signs of Alzheimer's.

REAGAN: I wasn't and I made that point.

VARGAS: And shouldn't be speculating.

REAGAN: No, I'm saying, I can't say that I was seeing signs of Alzheimer's. I had little worries. They may, in retrospect, have been very early inklings of this. But I can't say that for sure. You're right. I'm not a doctor. I'm just trying to deal with this in an open and honest way as I experienced. That's all.

STEPHANOPOULOS: One of the things you write was how difficult a man your father was to know personally.

REAGAN: Yes, yes, he was. Because I would hate for people to think that the whole book is also Alzheimer's. That's about really about this much [makes a small amount sign with his fingers] of a much larger story.

STEPHANOPOULOS: That often does happen with books. When you look back, because so much of the public felt they had such a personal connection to him. Do you think there's anything on your side you could have done to make that connection with him?

REAGAN: Um, well, I felt that I had a personal connection with him. It's not that. It's just that, you know, I talk about the book. There's a sort of metaphorical ten percent that he would keep to himself. He's very private that way. You would see glimpses every once in a while. I mention early on in his life when he announced to his friends back in Dixon, within a few years he would be making $5,000 a year. This is the beginning of the Depression. That's a sign of that inner ambition he was there, that he kept hidden most of the time because he didn't think it was a very admiral thing to be personally ambitious. So, we would cover that up.

STEPHANOPOULOS: But, you don't get to be president if you're not ambitious.

REAGAN: Some ambition burning in side there.

STEPHANOPOULOS: Thanks a lot for sharing this all with us.