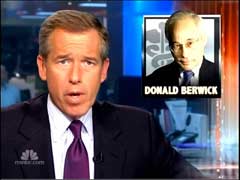 He also observed, "Berwick has spoken about the need to ration medical care to control costs."

NBC has offered the most reporting on Berwick: 20 seconds during the Today show on Wednesday and 35 seconds on Nightly News. Those 55 seconds are still more than ABC and CBS's morning and evening news programs. Their total remains at zero.

Yet, the same morning shows (on July 7 and 8) devoted 52 minutes to the important topic of Lindsay Lohan's sentencing.

Although Williams blandly explained that Berwick has "spoken about the need to ration medical care," he offered no quotes.

A transcript of the July 8 segment, which aired at 7:17pm EDT, follows:

BRIAN WILLIAMS: In this country, a new political skirmish in Washington over health care. It's about an appointment President Obama made while Congress was out for the July Fourth break, a so-called recess appointment naming Harvard professor Dr. Donald Berwick to manage Medicare and Medicaid, skipping the usual Senate confirmation process.

Republicans are angry, claiming it's antagonistic. One top Democrat called the recess appointment troubling, but the administration fired back, saying this was one of many appointments being blocked by the Senate. Berwick has spoken about the need to ration medical care to control costs.