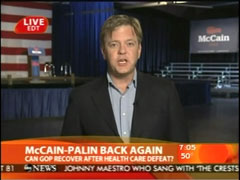 Good Morning America's David Wright on Friday ominously warned that Sarah Palin's "tactics," which include encouraging conservatives to politically "reload" and putting cross-hairs over Democrats she wishes to see defeated, "may backfire." Wright vaguely explained that this was "after several congressmen received death threats this week."

However, Wright didn't specifically mention that Republican Congressman Eric Cantor had a bullet shot through his office this week. He also ignored the threats received by GOP Representative Jean Schmidt. In fact, Good Morning America didn't cover these developments at all.

On Thursday, GMA eagerly played up violent warnings against Democratic Congressman Bart Stupak and reporter Pierre Thomas touted the party's fears that "all this angry talk could push a deranged person over the edge."

David Wright has a history of gratuitously bashing Sarah Palin. On February 16, 2009, during an otherwise unrelated segment on the 50th anniversary of Barbie, he highlighted all the careers the doll has had and smeared, "Some would argue she also ran for vice president in 2008."

Of course, Wright might forever be known for this quote about brutal dictator Saddam Hussein:

"Seven years ago, when the last referendum took place, Saddam Hussein won 99.96 percent of the vote. Of course, it is impossible to say whether that’s a true measure of the Iraqi people’s feelings."

Seems like he's tougher on Palin than he was on Saddam.

A transcript of the March 26 segment, which aired at 7:05am EDT, follows:

BILL WEIR: It was just a few hours ago that battle royale over health care was decisively won by the Democrats. Overnight, the House passed all the fixes to the health care bill, once and for all. It's a blow that has Republicans looking to some familiar faces to help reboot and David Wright has that story. Good morning, David.

DAVID WRIGHT: Good morning, Bill. You know, the defeat in Congress over health care has given conservatives something to rally around and Sarah Palin is hoping to lead the charge. You know, she recently signed a multimillion dollar TV deal. But the true test of her stature may be in places like Tucson here where, a bit of deja vu, she's out campaigning for her old boss. For the first time since November 2008, Sarah Palin today hits the campaign trail for John McCain. First stop in a Republican counterattack she hopes to lead.

MARK HALPERIN (Senior political analyst, Time magazine): The fight over health care in Congress is over but the fight in the country is just beginning.

WRIGHT: Sarah Palin's message to conservatives, "Don't ret retreat. Instead, reload." Her Facebook page even puts 17 Democrats, literally in the cross-hairs. Tactics that may backfire, especially after several congressmen received death threats this week. McCain has already been forced to defend Palin.

SENATOR JOHN MCCAIN: This is- any threat of violence is terrible but to say that there is a targeted district or that we reload or go back into the fight again- please.

WRIGHT: But, McCain needs her now more than ever. His fortunes have changed since he brought her on to the national political stage.

MCCAIN: When you get to know her, you're going to be as impressed as I am.

WRIGHT: Now, she is the darling of the party and he is fighting for his political life.

HALPERIN: This is payback time for John McCain. But, payback time in a good way. He elevated Sarah Palin to national and international prominence. Now, she is coming to return the favor to him to help save his job.

WRIGHT: McCain faces his toughest re-election fight ever. Challenged in the GOP primary by a popular talk radio host.

WRIGHT: The political ground is shifting among Republicans and that could topple even the party's old standard-bearer. That's why McCain needs Palin's help. She has come to personify that outsider anger among conservatives and John McCain is hoping he can harness those conservatives, keep them on his side at a time when many of them want new blood.