After explaining how Robertson asserted that the people of Haiti, long ago, "swore a pact to the Devil" and have been "cursed" ever since, Shipman featured this over-the-top rant from the lefty Olbermann: "Sir, because of your tone deafness and your delight in human misery and your dripping, self satisfied, holier-than-thou, senile crap, I'm now likely to believe that you are the Devil."

Shipman left out the rest of Olbermann’s diatribe from his January 13 show. He went to excoriate Robertson and also Rush Limbaugh (for comments the host made about the disaster): "And I would wish you to hell. But knowing how empty your souls must be for you to be able to say such things in a time of such pain, I suspect the vacant, purposeless lives you both live now are hell enough already." Since Shipman was citing Olbermann as some sort of source, why skip this section? Was it too extreme for ABC?

Shipman chastised Robertson throughout the segment, wondering if his comments are "a bit un-Christian." She also proclaimed to Stephanopoulos, "...I think that the Haitians won't be relying on the prayers of Pat Robertson." In contrast, Good Morning America, on a number of occasions during the 2008 campaign, minimized the hateful rhetoric of Barack Obama’s then-preacher, Jeremiah Wright. On April 25, 2008, reporter David Wright cooed that the "soft-spoken" reverend "couldn't seem more different from that fire-brand preacher we've all seen in those sound bites."

On April 30, David Wright agonized on the public separation of Obama and the man who described 9/11 as retribution for U.S. foreign policy. Reporter Wright (no relation) fretted, "Imagine having to publicly denounce the minister who married you, who baptized your kids, who prayed with you the day you announced your candidacy for president."

Certainly, many Christians and conservatives were offended and embarrassed by Robertson’s comments. When Robertson ran for President and weilded the power of the Christian Coalition, one could describe him as "one of the America's top religious leaders." But, now such a description is highly questionable.

A transcript of the January 14 segment, which aired at 8:10am EST, follow:

GEORGE STEPHANOPOULOS: As we said earlier, there are 45,000 Americans in Haiti. Many of them, missionaries and aid workers who are already in the country to help the western hemisphere's poorest country. And in the wake of the devastation, one of America's top religious leaders made a very controversial comment about what he believed caused the disaster. Claire Shipman is in Washington with that story. 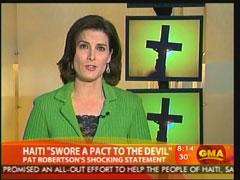 CLAIRE SHIPMAN: Good morning, George. You know, at times like these, the rhetoric from all corners of the world tends to be constructive, concerned, supportive, especially when you're speaking in the name of God. Not so for Pat Robertson, who as one minister told me last night, just seems to enjoy twisting the knife in the victim. It's a tragedy of such enormous proportions, it's natural to wonder how or why God could allow it. Enter the Reverend Pat Robertson, who always seems to have a ready answer for the unanswerable.

PAT ROBERTSON: Something happened some time ago in Haiti. They got together and swore a pact to the Devil. We will serve you if we get free from the French. It’s a true story.

SHIPMAN: That's right. The Haitians brought the earthquake on themselves in a deal with Satan.

ROBERTSON: So, the Devil said okay. It's a deal. And they kicked the French out- You know, the Haitians revolted and got themselves free. But ever since, they have been cursed by one thing after the other.

SHIPMAN: A curse. A servant of God using Haitian folklore to explain the death of tens of thousands. Rings a bit un-Christian?

ROBERT JEFFRESS (First Baptist Church of Dallas, Texas): It is absolute arrogance to try to interpret any of God's actions as a judgment against this person or that person. We can only go as far as the Bible goes. And the Bible is clear. God says, "I'm the God who creates calamity and causes well-being."

SHIPMAN: The slur instantly triggered a firestorm online and on air waves.

KEITH OLBERMANN: Sir, because of your tone deafness and your delight in human misery and your dripping, self satisfied, holier-than-thou, senile crap, I'm now likely to believe that you are the Devil.

FRANKLIN GRAHAM (Samaritan’s Purse International Relief): I don’t agree with what Pat Robertson said. I'm sure he misspoke. It's unfortunate. But, we need to get on the task of helping people right now.

SHIPMAN: Franklin Graham has his relief organization there in force.

GRAHAM: God loves the people of Haiti. He hasn't turned his back on Haiti.

SHIPMAN: But a vengeful God has long been Robertson's weapon of choice. Ariel Sharon’s stroke? Retribution for ceding land to the Palestinians.

ROBERTSON: I'm sad to see him in this condition. The prophet Joel makes it very clear that God has enmity for whose who, quote, "divide my land."

SHIPMAN: September 11, he and Jerry Falwell called it punishment for loose American morals.

JERRY FALWELL: You helped this happen.

ROBERTSON: We have killed over 40 million unborn babies in America. Some of the attacks that are coming against us, either by terrorists or by natural disaster, could they be connected in some way?

SHIPMAN: Now, last night, Robertson's ministry tried to explain that he didn't mean to suggest this was the Haitians' fault. He was only talking about a legend. But somehow, George, I think that the Haitians won't be relying on the prayers of Pat Robertson.

STEPHANOPOULOS: I think, to say the least. You know, when I was talking to Valerie Jarrett, the White House adviser earlier, I asked her about Robertson's comment. She said it left her speechless.

VALERIE JARRETT: That's not the attitude that really expresses the spirit of the President and of the American people. So, I thought it was a stunning comment to make.

STEPHANOPOULOS: And I wondering, Claire, if you think that Reverend Robertson will have to go farther? When you have Franklin Graham saying he doesn’t agree, do you think you’re going to see more clarification from the Reverend himself today?

SHIPMAN: I think he may. I mean, the reaction I got from ministers I talked to last nights, was stunned silence initially. And, again, George, they all pointed out that the Bible itself explicitly says, people cannot interpret God's will. I think he's going to hear a lot from his own community about what he said.

STEPHANOPOULOS: Okay. Claire Shipman, thanks very much. How do you feel about Pat Robertson's comments? Go to our website and weigh in at our Shoutout board.