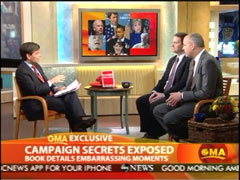 Good Morning America co-host George Stephanopoulos on Monday talked to the authors of a new book on the 2008 presidential campaign and appeared unsurprised that journalists knew about the affair John Edwards was having, but ignored it. Stephanopoulos blithely acknowledged, "And a lot of Edwards insiders, Mark, and you even say reporters covering the campaign, knew something about this."

Co-author Mark Halperin appeared to see journalists ignoring the relationship, and Edwards likely fathering a child with his mistress, as something almost admirable. He mused, "Well, reporters stayed away from it. It's an interesting case. We think in this day and age where there's so much out there, so much media, the standards are so low, that everything gets reported."

Continuing to spin the spiking of bad news about a Democrat, the Time political analyst added, "In fact, in the case of John Edwards and some of the other stories we wrote about in the book, even though reporters had an inkling, even though a lot of insiders had inklings, a lot of that stuff stayed secret, didn't impact the campaign." Stephanopoulos failed to ask the obvious question, why reveal damaging information now, when John Edwards’ career is over, but not when it would be politically damaging to the Democrat?

Stephanopoulos also prompted co-author John Heilemann to talk about the "love story between Barack Obama and Hillary Clinton." Heilemann proceeded to assert that Clinton always liked the then-senator: "We didn't know how much Hillary Clinton had been enamored of Barack Obama back in 2004. You know, she'd held fund-raisers for him. She’d gone to Chicago. She'd said, you know, there was a superstar in a candidate. He was the kind of candidate that, if she had not been running she and her husband would have loved to have supported in 2008." The author acknowledged a "falling out" during the presidential campaign, but claimed everything is fine now.

Regarding the book’s bombshell revelation that Senate Majority Leader Harry Reid asserted that Obama had "no Negro dialect unless he wanted to have one," Stephanopoulos worried about the appropriateness of the authors using the remark: "A lot of Senator Reid's supporters have claimed that these were off-the-record comments, never intending for publication, suggesting you all broke your word for the senator."

Considering the fact that Stephanopoulos and Halperin are friends and have had a cozy relationship, this interview seems, once again, like one that should have been conducted by co-host Robin Roberts. She has mostly been shut out from such segments since Stephanopoulos arrived.

A transcript of the January 11 segment, which aired at 7:04am EST, follows:

GEORGE STEPHANOPOULOS: The book is called Game Change. The authors are here with us here live this morning, John Heilemann, political correspondent for New York magazine, Mark Halperin, senior political analyst for Time magazine. Welcome to you both. And why don’t you begin by weighing in on the controversy you kicked up. Mark, start with you. Harry Reid’s comments, no big deal or a firing offense?

MARK HALPERIN (Time): Well, look, that's not for us to say. What we've done is try to write a book of history, Harry Reid played a huge role in this campaign. A lot of focus on the comments he made about race. The bigger story, as far as we're concerned, is the fact that the reason he was talking about Barack Obama so early is because he wanted to stop Hillary Clinton. Publicly, he was neutral. The inside story of what happened in the campaign was Harry Reid, other big Democrats, wanted to stop Hillary Clinton and said they were for Barack Obama. That’s why he called Barack Obama down to his office.

STEPHANOPOULOS: That is one of the surprising things you all point out. A lot of senior Democratic senators who are publicly supporting Hillary Clinton, actually privately promoting Barack Obama. But one more controversy on this, John. A lot of Senator Reid's supporters have claimed that these were off-the-record comments, never intending for publication, suggesting you all broke your word for the senator.

JOHN HEILEMANN (New York magazine): George, we did over 300 interviews for the book. More than 200 people. All the interviews we conducted were on deep background. We did no off-the-record interviews and we have burned no sources in this book.

STEPHANOPOULOS: So absolutely not?

STEPHANOPOULOS: Let's move on then to some other revelations in the book. One of the themes of the book is that the disconnect between the public image of a lot of candidates and their spouses and their actual private behavior. And it's most inflammatory in the case of Elizabeth Edwards. I want to show a little bit of an excerpt here of the book. You say, "What the world saw in Elizabeth: a valiant, determined, heroic, every woman. What the Edwards insiders saw: an abusive, intrusive, paranoid, condescending crazy woman." You call it the lie of Saint Elizabeth.

HEILEMANN: You know, it was one of the most striking things. There were so many things throughout the book, that we were shocked, even given our knowledge of politics, we were surprised what we learned in the course of reporting the book. And this is one of the biggest things. It's a striking, as you say, a striking variance between her public image and the private reality. But, I would say it was very much the consensus opinion, among everyone in the Edwards' orbit, even people who were incredibly sensitive to Elizabeth had this point of view about her.

STEPHANOPOULOS: And even before she was stricken with recurrence of the breast cancer. One of the other things you point out in the whole Edwards story, of course, we’ve now learned that Senator Edwards was conducting an affair basically throughout the entire campaign, probably fathered a child. And a lot of Edwards insiders, Mark, and you even say reporters covering the campaign, knew something about this.

HALPERIN: Well, reporters stayed away from it. It's an interesting case. We think in this day and age where there's so much out there, so much media, the standards are so low, that everything gets reported. In fact, in the case of John Edwards and some of the other stories we wrote about in the book, even though reporters had an inkling, even though a lot of insiders had inklings, a lot of that stuff stayed secret, didn't impact the campaign. And now it’s just coming out in our book.

STEPHANOPOULOS: So you all didn't sit on anything you could have reported in the campaign?

STEPHANOPOULOS: Let's talk about something else between Vice President Biden and Barack Obama. A fair amount of tension late in the campaign that hasn't been reported before. You talk about in September, Joe Biden being on the bus, hanging out around with reporters. Here's what it says: "Biden had been hanging around with the reporters, running his mouth about how he was more qualified to be president than Barack Obama." And you say that this created a real chill between Barack Obama and Joe Biden that took weeks, if not months, to solve?

HEILEMANN: Yeah, word got back from the plane that Biden had said this thing, got back to Chicago. And there was always a concern that Biden would talk too much, would say the wrong things. As soon as that happened, that was the moment where they cut back Biden's access to the press. And it was beginning of the rift that opened up to the point where, when Biden said the thing in Seattle about how he would be tested like- at some point early in his administration, he’d be tested this young president would be tested- that was the thing that blew the rift wide open with Obama saying, "How many times is Biden going to say something stupid?"

STEPHANOPOULOS: The Biden office said you didn't even check with him on these quotes and that the relationship is as strong as it could be.

HALPERIN: Well, the relationship now is good. In part, because after this blowup, as we report in the book, they did have kind of a coming back together. Biden didn't realize initially why Obama was so angry at him. He was told by some of his staffers, "You know what, you better make this right." They came together and they started to build towards what we see in the White House. In terms of challenging- of, of not checking with them, believe me, we talked to plenty of people around Joe Biden about the facts in the book. Those facts, those stories, are accurate just like everything else. They didn't challenge anything specific.

STEPHANOPOULOS: One more on that point, lot of revelations about Sarah Palin. I asked Liz Cheney about one of them yesterday. You write that Vice President Cheney thought this was a reckless choice. I asked her about that yesterday. [Cut to clip from This Week] Liz, there's one other revelation in this book, there are many, but one of them is that your father, former Vice President Cheney, when he heard about Sarah Palin being picked thought it was a reckless act by John McCain, is that true?

LIZ CHENEY: No, that's not accurate.

STEPHANOPOULOS: So, you stand behind everything so far?

STEPHANOPOULOS: One final question. The love story between Barack Obama and Hillary Clinton.

HEILEMANN: Look, it was astonishing to us. We didn't know how much Hillary Clinton had been enamored of Barack Obama back in 2004. You know, she'd held fund-raisers for him. She’d gone to Chicago. She'd said, you know, there was a superstar in a candidate. He was the kind of candidate that, if she had not been running she and her husband would have loved to have supported in 2008. They then obviously fell out in a profound and deep and bitter way through the course of the campaign. But, in the end, they came back together and make a partnership that has worked incredibly well over the last year.

STEPHANOPOULOS: Okay, John Heilemann, Mark Halperin. Thanks so much. Did you plan for the book to come out on your birthday?

HALPERIN: Yes. Part of the entire master plan is the release of the book because I like to get presents.

STEPHANOPOULOS: Well, Happy birthday. To read an excerpt of Game Change by Mark Halperin and John Heilemann, you can go to ABCNews.com/books. Robin?