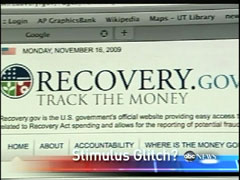 NBC and CBS’s morning shows on Tuesday completely ignored the revelation that the Obama administration’s Recovery.gov website claims to have saved or created jobs in congressional districts that don’t exist. ABC’s Good Morning America devoted 21 seconds to the developing story.

And yet, NBC’s Today show and CBS’s Early Show on Tuesday skipped the report. Good Morning America opted for a single news report by Chris Cuomo. He quickly recapped the story and added, "The administration blames human error, but says the job count is still correct."

CHRIS CUOMO: A White House website set up to track new stimulus jobs lists places that do not exist. The site says 30 jobs were created in Arizona's 15th congressional district. The problem is, there is no 15th district. For nearly every state, the website lists fictional congressional districts. The administration blames human error, but says the job count is still correct.

CHARLES GIBSON: One of the great curiosities in Washington involves the economic stimulus program. How many jobs does it save? How many jobs has it created? There's a government website that is supposed to track those questions region by region across the country. Our Chief Congressional correspondent Jonathan Karl has been checking it and has found it puzzling. Jon? 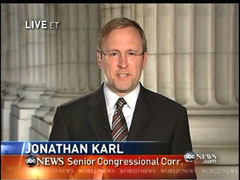 JONATHAN KARL: Charlie, nobody is suggesting any wrongdoing here, but the $18 million website created by the White House to track the stimulus lists millions of dollars spent and jobs created in places that don't exist. The Recovery.gov website has a wealth of information about stimulus spending.

VICE PRESIDENT JOE BIDEN (UNITED STATES): We got a new modern website that's going to blow you away in terms of how detailed it is. I really mean that.