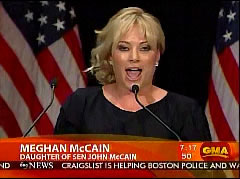 "Good Morning America" on Tuesday highlighted a controversy involving gay marriage and a beauty contest and touted Meghan McCain as an example of a moderate Republican. Reporter David Wright referenced the daughter of Senator John McCain in a piece on the developing story over the Miss USA pageant and whether or not an answer on gay marriage caused the contestant from California to lose the title.

After asserting that gay rights are more mainstream these days, Wright reminded viewers of a decision by the Iowa Supreme Court legalizing same sex marriage. He spun, "And over the weekend, the daughter of the former Republican standard bearer, Meghan McCain, suggested she is all in favor of it." ABC then played a clip of Ms. McCain calling herself a Republican. Of course, just as MSNBC did in a story yesterday on McCain, Wright made no mention of the fact that the senator's daughter voted for John Kerry in 2004 and supported Al Gore in 2000.

Wright explained the background, that contestant Carrie Prejean was asked by a pageant judge, the liberal (and openly gay) blogger Perez Hilton, if she supported gay marriage. She said no and went on to ultimately lose. Wright added, "Hilton wasted no time in blogging his contempt." The ABC journalist featured a clip of the gossip blogger calling her response "the worst answer in history." What Wright completely ignored, however, is the hateful language Hilton has used since. In posts and on television, he referred to Ms. Prejean as a "bitch" and stated that he wanted to use the "c-word." Isn't his vulgarity and anger relevant to the story?

Wright, in reference to Prejean's opposition to gay marriage, did close the piece by noting, "She's in good company. The voters in California clearly agree with her, even though the state Supreme Court there does not." But, using a Gore and Kerry supporter (and not mentioning those facts) as an example of GOP moderation on the subject of same sex marriage is misleading at best.

A transcript of the April 21 segment, which aired at 7:15am, follows: 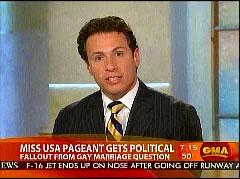 CHRIS CUOMO: Now, we have the latest development for you in a growing and divisive cultural issue, gay marriage. Next week, Iowa will become the first Midwestern state to recognize gay marriage as a right, several more states are considering laws. But 30 states have taken measures to limit gay marriage. This has become a cultural divide that was on full display Sunday night at the Miss USA pageant. ABC's David Wright has more.

PEREZ HILTON: Vermont recently became the fourth state to legalize same-sex marriage. Do you think every state should follow suit?

CARRIE PREJEAN: I think that I believe that a marriage should be between a man and a woman. No offense to anyone out there.

WRIGHT: Hilton wasted no time in blogging his contempt.

HILTON (Gossip blogger, Miss USA judge): The thing that upset me the most about Miss California's answer was how polarizing it was. It instantly alienated me and millions of gay and lesbian people.

WRIGHT: She isn't the first beauty queen to anger the gay community. Back in the '70s, former Miss America Anita Bryant famously campaigned against gay rights. But these days, the issue is becoming more mainstream. Starting next week, couples in Iowa can start tying the knot. Four states have legalized it. Others may soon follow suit. And over the weekend, the daughter of the former Republican standard bearer, Meghan McCain, suggested she is all in favor of it.

MEGHAN MCCAIN: I have lots and lots of gay friends. And, yes, I am a Republican.

WRIGHT: Even so, Carrie Prejean told Billy Bush's radio show, she stands by her answer.

PREJEAN: It did cost me my crown. But I don't care, because I stood up for what I believe in.

WRIGHT: She's in good company. The voters in California clearly agree with her, even though the state Supreme Court there does not. For "Good Morning America," David Wright, ABC News, Washington.