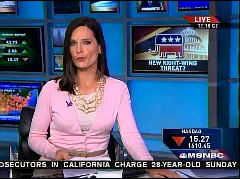 [UPDATED: 2009-04-16 15:01:00] "MSNBC News Live" host Contessa Brewer on Wednesday reported four times on the possible threat of right-wing violence against the government. And for several of those segments there was a graphic in the background that featured the elephant logo of the GOP and the words, "New Right-Wing Threat?" Speaking to Democratic strategist Bob Shrum, Brewer asked about a Department of Homeland Security (DHS) report warning of "right-wing extremists." In a bewildered tone, she wondered, "...Is it just a leap to think that they're talking about Republicans? They didn't even mention conservatives in the report."

If the DHS report didn't mention conservatives or Republicans, why did MSNBC feature a graphic that included an elephant, clearly a symbol for the GOP? In an earlier segment, NBC correspondent Pete Williams explained, "Now, we're not talking about [the] political right here. We're talking about extremist groups. Neo-Nazi groups, white supremacist groups, anti-government groups, hate groups." Brewer promptly responded, "So to be clear here, not just extreme conservatives." Not just extreme conservatives?

Clarifying statements like the one from Williams make MSNBC's graphic all the more irresponsible. MSNBC (or at least their graphic department) seemed to be taking a report on possible violent extremists and extrapolating it to include the entire Republican Party.

Upon being apprised by NewsBusters, via a Twitter posting, of the MSNBC graphic in question, Ms. Brewer responded, "Good point. I just forwarded your column to my producers. Thanks for bringing it to my attention." The MSNBC anchor should be commended for at least considering the issue and taking it seriously.

Partial transcripts of two of the segments on the "right-wing threat" follow:

CONTESSA BREWER: A bold new warning from the Department of Homeland Security. Beware of the violent, radical right. And guess who the guys are apparently recruiting? The department's reports cites concerns that, quote, "right-wing extremists will attempt to recruit and radicalize returning veterans in order to boost their violent capabilities." NBC News Justice correspondent Pete Williams is in Washington, D.C. Does the report give any examples of this happening?

PETE WILLIAMS: Well, it does. It notes the most famous example who was Timothy McVeigh, who served in the U.S. Army and came back and was very disenchanted, concerned about gun control, concerned about Waco. And these are believed to be factors that led him, ultimately, to bomb the Oklahoma City federal building. The report says that these groups are trying to recruit more military veterans because they admire their training. They want to take advantage of it. They believe that military veterans are good at leadership. And in that sense, the report echoes what the FBI said in a report last July. The FBI actually did a lot of case work and said that they identified 200 veterans of Iraq and Afghanistan and the U.S. military who had joined terrorist organizations in, basically, the first eight years of this decade. And it said that these groups really reach out to these people. That's the message of this report. What they say is- what this report is an attempt to do is look at how the radical right- Now, we're not talking about political right here. We're talking about extremist groups. Neo-Nazi groups, white supremacist groups, anti-government groups, hate groups. This is the sort of things they are trying to recruit about. Concerns about the economy, the rise in illegal immigration. Fears of renewed gun control. The fact there's now an African-American president. Those are all rallying points that these groups are trying to use to get more members.

BREWER: So to be clear here, not just extreme conservatives.

WILLIAMS: The word conservative does not even appear in this report. This is not about politics. This is about hate groups trying to get more membership. That's right.

RUSH LIMBAUGH: When you read what a typical leftist like Obama or Janet Napolitano put together in the Department of Homeland Security report, you conclude none other, nothing else, that they are extreme partisan radicals and ready to go to war with a domestic enemy, conservatives.

CARLOS WATSON (MSNBC host): Strong language from Rush. Bob Shrum is a Democratic strategist and Phil Musser a Republican strategist. Bob, I'm going to go to you first, given that the Republican Party has struggled a bit, obviously in recent months including the November election, does the tea bag effort make sense, as a way to kind of jump start some energy, some excitement?

BOB SHRUM: Well, actually, on the tea bags I think it's been less a tea party than a series of tea clashes. There seems to be dozens of couple of hundred people shown up at these places around the country. Overwhelmingly, the data shows that people trust President Obama on the economy. They want to do what they wants they believe he is cutting middle class taxes. So, I think it's just another expression of Republican frustration.

BREWER: And let's me ask you, Bob, on this issue of the administration saying that some of the current events that we're seeing make it possible for these radical extremists to recruit new members, is it just a leap to think that they're talking about Republicans? They didn't even mention conservatives in the report.

SHRUM: Listen, when Rush Limbaugh weighs in, he weighs in heavily. And he clearly thought he had something to say here. So, he was going to go after it. There's no word about conservative in here. There's no word Republican in here. The fact is that the FBI under George Bush last July issued a very similar report and one of the worst terrorist incidents we ever had in the country, short of 9/11, came from haters who were anti-government and who bombed the federal building in Oklahoma City.