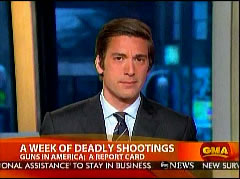 On Monday's "Good Morning America," reporter David Muir highlighted a rabidly pro-gun control group as an expert on weapons, without referencing the organization's political stance. The journalist also promoted "If I Only Had a Gun," an ABC special to air Friday night that seems to argue for tighter restrictions on firearms. During a segment on the tragic shootings in Pittsburgh and New York, Muir featured a clip from Michael Wolkowitz, who is a member of the board of trustees for the Brady Center to Prevent Gun Violence.

No mention was made of his organization's anti-Second Amendment position and the only identification vaguely read, "Board of Trustees, Brady Center." Wolkowitz complained, "We have 32 people being murdered by guns every day in this country. If peanut butter or pistachio nuts or spinach killed that number of people once in one day, they'd be pulled by the FDA." Now, while ABC tried to conceal the group's goals, the Brady Center's campaign website does not. It currently  (as of April 6) shows a picture Wolkowitz's appearance on ABC and a pitch to "pass common sense gun laws that require Brady criminal background checks on all gun sales, including those at gun shows." (Readers are then urged to contact Congress.)

In contrast, no voice opposing gun control was featured in the GMA segment. Instead, Muir, referencing gun shows, blandly stated at the end of the piece, "Now, the private sellers at these gun shows will tell you they don't have to ask, they don't have to according to the law. It's their privacy rights and, they say, business."

Co-host Diane Sawyer then promoted a one hour special on the subject of gun control subjectively entitled "If I Only Had a Gun." Among the topics to be covered, Sawyer explained, "...Since there is an impulse to think if I had a gun I could protect myself and others, we have an experience we'll conduct based on a real incident in which we show you what happens."

All of this is just a day after Sunday's GMA featured a "controversial" guest who argued that gun control wasn't effective. As the MRC's Brad Wilmouth explained, ABC should get credit for featuring an opposing view, but co-host Kate Snow seemed puzzled by his take. "We're going to have a guest on this morning, a criminologist who has a, interesting take, you could say controversial take," she opined in a tease for the segment.

A transcript of the April 6 segment, which aired at 7:12am, follows:

DIANE SAWYER: We turn now to the question so many people have been asking, especially over this weekend: What is going on with the gun rampages in America? In the last month we have seen seven shootings that claimed 48 lives, including those attacks, of course, in Pittsburgh, Pennsylvania and Binghamton, New York. And some new details are emerging about those this morning. ABC's David Muir is here with them.

ABC GRAPHIC: A Week of Deadly Shootings: Guns in America: A Report Card

DAVID MUIR: The numbers are staggering, Diane. And this morning, we are getting a clear picture of those two killers. First the man behind the terrifying chaos in that Pittsburgh area neighborhood after police were called to the home where 23-year-old Richard Poplawski lived with his mother. The mother had told authorities she and her son had had an argument. She called police. When the first two officers arrived, she opened the door not knowing her son was standing behind her with an AK-47 assault-style rifle. Three officers were killed. Two others wounded. Police say he also had a .22 caliber rifle, a revolver and was wearing a bulletproof vest. His close friend told us Poplawski had long feared losing his right to own guns.

EDWARD PERKOVIC (friend of Richard Poplawski): They were all legal. He had about four guns. I've been into people's houses where they have gun cases with 20-some guns. I mean, you know, he had a small, small amount of guns.

MUIR: And in Binghamton, New York, the portrait of another killer. 41-year-old Jiverly Wong shot and killed 13 people and then himself at this immigrant services center where he once took English classes. Investigators believe he was an isolated man who couldn't find work.

UNIDENTIFIED POLICE OFFICIAL: Apparently, people were making fun of him and his inability to speak English.

MUIR: And police say Wong made weekly visits to a gun range.

MICHAEL WOLKOWITZ (Board of Trustees, Brady Center): We have 32 people being murdered by guns every day in this country. If peanut butter or pistachio nuts or spinach killed that number of people once in one day, they'd be pulled by the FDA.

MUIR: These mass shootings come nearly two years after the massacre at Virginia Tech. Two years after the Virginia governor and authorities urged lawmakers to close the gun show loophole where customers can buy guns, no questions asked. For more than a year now, ABC News has followed this Omar Samaha, whose sister Reema was among the students killed. His quest now is to keep authorities to their word. We visited with gun show in Richmond, Virginia, where we give Omar one hour and about $5,000 in cash. What could he buy? Before he's even inside he's approached by a seller. He buys a gun, no questions asked. So this is what?

OMAR SAMAHA: This is a Glock.

MUIR: So, you bought it before you even got into the show.

SAMAHA: Yeah, he was sitting right outside the door. Went up to him. How much you want for it? 450 bucks. Here's the cash. Thanks. See you later. That was it.

MUIR: It was a purchase that sent chills for Omar, a Glock handgun, the same kind of gun used to kill his sister Reema and 31 others at Virginia Tech. Now, the private sellers at these gun shows will tell you they don't have to ask, they don't have to according to the law. It's their privacy rights and, they say, business. And, of course, Diane, you know that was just the first couple of minutes with Omar. You won't believe the question that finally does get asked of him in the parking lot. None of us were expecting it?

SAWYER: Right and we should tell everyone, you and I have been working for a year now on a special we're going to be bringing on Friday night. Trying to answer some questions, for instance, what kind of gun laws do work, which ones don't work and also questions about mental health.

MUIR: And about intruders. Whether or not you can protect yourself if an intruder came into your home.

SAWYER: Yes, we're going to take some surveillance tapes of scenes we've had around the country. Some of these gun violence scenes and tell you who survived. Who didn't. What did they do? And also, since there is an impulse to think if I had a gun I could protect myself and others, we have an experience we'll conduct based on a real incident in which we show you what happens. Some people who have been trained with guns, can they get to them? Can they use them? What really happens and what kind of danger is there to an innocent bystander?

MUIR: And, ten years ago I know you looked at kids and guns. What they would do. Parents who said I taught my kid everything. My child won't pick up a gun. We revisit this experiment. Look at the children here. Ten years later with Columbine, Virginia Tech, have we learned? Have we learned were promises kept? We revisit the experiment with older kids, teenagers, college-age kids and we'll see what they do when they discover a gun.

SAWYER: All these questions being posed. We'll try to answer them for you, Friday night ABC News on a special called "If I Only Had a Gun."