David Shuster Slams 'Nutty,' 'Offensive' Quotes from Rush and Others 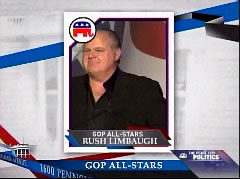 "1600 Pennsylvania Avenue" host David Shuster escalated his attack on Rush Limbaugh and other conservatives on Monday's show. In a tease for a segment on "GOP all stars," Shuster complained, "Plus, the nutty rhetoric continues from Rush Limbaugh, Michael Steele and Sarah Palin." In a later tease, he fretted, "Up next, how offensive can Rush Limbaugh be?"

The attack on Limbaugh was taken straight from a clip posted on the liberal Media Matters website on Friday. Limbaugh was discussing the flooding in North Dakota and made a joke about PC language and also a sly comment on how the Obama administration is dropping phrases such as the "war on terror." However, Shuster raged to guests Matt Lewis and Democratic strategist Chris Kofinis, "Rush Limbaugh referred- used the word dike when talking about flooding in North Dakota. But, that was not the context that he was using it. He was talking about Democratic female politicians. That kind of stuff, where does that- why do people listen to Rush Limbaugh?"

Even a partial transcript from a liberal website makes Limbaugh's point clear:

Obviously, this was a joke about how the Obama administration will now be using the phrase "overseas contingency operations" instead of "war on terror." 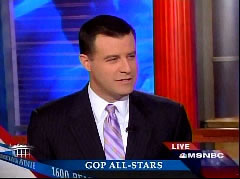 Shuster, who on Monday called Limbaugh "amazingly offensive," insisted on March 5, 2009 that those Republicans who don't denounce the radio host "appear unpatriotic."

A partial transcript of the March 30 segment and the teases, follows:

DAVID SHUSTER: Plus, the nutty rhetoric continues from Rush Limbaugh, Michael Steele and Sarah Palin. Palin stands by her complaints about the McCain campaign.

GOVERNOR SARAH PALIN: But nobody that I could find that I wanted to hold hands with and pray with.

SHUSTER: At the half hour, Republican Michael Steele has done it again. His latest rhetoric is confusing and strange, but it's nothing compared to Rush Limbaugh's latest screed. The GOP all stars, we will have their latest at the half hour.

SHUSTER: Coming up at the half-hour, the GOP all stars: The latest bizarre rhetoric from Sarah Palin, Michael Steele and Rush Limbaugh. You don't want to miss this.

SHUSTER: Up next, how offensive can Rush Limbaugh be? We will show you. Plus, the latest bizarre comments from RNC chair Michael Steele and the prayer battle between Sarah Palin and John McCain. A GOP round-up.

SHUSTER: Welcome back to "1600 Pennsylvania Avenue." As President Obama prepares for his trip to Europe tomorrow and a spotlight on the world stage, it's hard to miss the Vaudeville act here at home in the Republican Party. And the GOP all stars are at it again. Republican National Committee Chair Michael Steele said last week his fight with Rush Limbaugh was by design. Now says he is done with President Obama.

SHUSTER: If Michael Steele doesn't make you sad, well, then there's radio host Rush Limbaugh, no longer content with wanting the President to fail, Rush is now calling out Mr. Obama as a girly man.

RUSH LIMBAUGH: Well, I tell you what‘s really scary about U.S. foreign policy right now is that Hillary Clinton is incompetent. The scary thing is she's twice the man Obama is. And that illustrates just how precarious our circumstance is.

SARAH PALIN: So I'm looking around for somebody to pray with. I just need maybe a little extra. And the McCain campaign, love them, there are a lot of people around me, but nobody I could find that wanted to hold hands with and pray.

SHUSTER: Joining us now is tonight's political panel. Chris Kofinis is a Democratic strategist and communications director for John Edwards. And Matt Lewis is a writer at AOLPoliticsDaily.com. Welcome to you both. Let's start with Michael Steele. Last week we heard that every move of his was part of a grand plan. Watch this.

CNN HOST: It's all strategic?

STEELE: It's all strategic.

SHUSTER: It's all strategic. Well, Matt Lewis, do you believe Michael Steele?

MATT LEWIS (AOLPoliticsDaily.com): Let me just say, if I make any mistakes tonight, it's all strategic. It's all planned.

SHUSTER: He's the chairman of the Republican National Committee. Do you believe him?

LEWIS: No, I actually don't. I think that was pure spin. By the way, I'm surprised that Michael Steele is even out there again. I thought he was doing better when he was being quiet. So, I'm actually surprised to see him back on television right now. Howard Dean had this same thing happen when he first became chairman.

LEWIS: Not quite like this. But Howard Dean had enough sense to sort of stay away from TV for a while. Michael Steele should learn that.

SHUSTER: A part of the media is Rush Limbaugh, who has, according to his own count, 20 some million viewers. Rush Limbaugh referred- used the word dike when talking about flooding in North Dakota. But, that was not the context that he was using it. He was talking about Democratic female politicians. That kind of stuff, where does that- why do people listen to Rush Limbaugh?

SHUSTER: But, he's amazingly offensive. He's offensive. Would you acknowledge that?

LEWIS: You know, I actually lived in North Dakota for a while. I have a lot of friends in North Dakota. So, I understand the sensitivity when you have this sort of tragedy going on.

SHUSTER: He wasn't talking about flooding.

LEWIS: It was a light-hearted moment.

CHRIS KOFINIS (Democratic strategist): This is the problem.

LEWIS: Conservatives are often criticized for being uptight and buttoned down.

KOFINIS: That's not funny. Being offensive, I think—

LEWIS: On air for 15 hours a week you might occasionally—