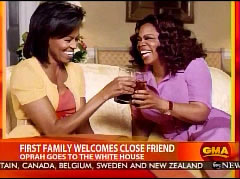 O Magazine editor Gayle King appeared on Monday's "Good Morning America" to rave about the "un-jaded," "not-complicated" and "so-darned normal" Obama family. The close associate of Oprah Winfrey talked with Diane Sawyer and repeatedly enthused about a Winfrey interview (see picture at right) with Mrs. Obama, at one point cooing that the first lady "only wants to be Michelle Obama, really. And nobody can do it better than she."

It seemed as though there was no question that Ms. King could not turn into effusive, unadulterated praise of politician's wife. After being asked by Sawyer about whether the first lady is bothered by questions about fashion, King said no and remarked, "It's like, there's a song by Maino, a rapper," she began. To demonstrate, the O editor started singing, "Hi, hater. You see me." She broke off and then rhapsodized, "People are just jealous, but Michelle- there is no point she is trying to prove. She's comfortable in her own skin and she looks good."

Earlier in the segment, King offered this insight on the first lady: "She's got so many great ideas about what she wants for us, for her family, for the country. I just- it's an amazing time." After lauding the Obama children, she fawned over the first couple, "That's what I love about them, though, Diane, that they are so un-jaded and so not-complicated and so darned normal." 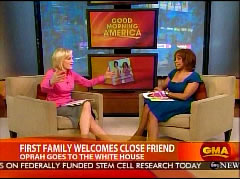 As a confident of Oprah Winfrey and the editor of the talk show host's popular magazine, King is an influential person. If she's going to act as a PR flack for the White House, outlets such as "Good Morning America" should offer a little more clarity and perhaps some skepticism. Clearly, that won't be coming from Winfrey or her media empire.

A transcript of the March 9 segment, which aired at 8:34am, follows:

DIANE SAWYER: And now, for the first time in nine years, Oprah is sharing the cover of the magazine with another person, First Lady Michelle Obama. It's her first White House interview and Mrs. Obama talks about everything, settling into the new home and O's editor at large Gayle King was there witnessing it all and here with us right now. Tell me about walking in, you and Oprah walking in and walking up to the family quarters.

SAWYER: Let's talk about some of the wide-ranging things that you talked about. Because one of them was rumors that she's pregnant. You ask about it.

KING: No, in the interview Oprah said nobody would be happier if you were pregnant than Gayle King. And that's so true. And she was sort of like, Gayle, stop talking. Because, you know, I have this fantasy of a White House baby. It would be a boy after two girls. And she said the only boy that's coming in here is the new White House puppy possibly. She's like, stop talking. The rumors because I've said- I've seen pictures of your tummy, you know, circled baby bump. She goes, "absolutely positively not true."

SAWYER: Right. No, She's- "After all the work I did on my abs they're saying that?" Also, you talk about the fact that she can drop in on the President at any time.

SAWYER: Does she just wander over?

KING: You know, she said very clearly that sometimes if he's had a particularly frustrating day it's just sort of nice to be able to pop over and say how are you doing? You know, I liken it to being a stay-at-home working dad, if you will. But, for them, it's the first time in a long time that they can have dinners together. That they can see each other every day, unless, he, of course, is traveling. But, they have very set schedules in terms of the girls and dinner and putting them to bed. And he's there. And, so, he's fully involved and fully engaged. And so is she.

SAWYER: What about her mom? How is that working out at the White House?

KING: We saw Mrs. Robinson that day. Yes. She had just picked up the girls from school and she said that is working great. You know, she has her own separate - you know, the White House is a very big place and that's working out really well. I mean, what could be better than to have somebody you really trust, who you really love, who loves you taking care of your family? It's a very close relationship and they all get along so well.

SAWYER: You were talking about the fact at one point that she was saying daddy's coming home and, of course, they can hear the helicopter so, yeah. No kidding.

KING: They're sitting there doing homework. She said, "Do you want to see? Daddy's home." And they're like, "No. That's okay. We'll wait to-" That's what I love about them, though, Diane, that they are so un-jaded and so not-complicated and so darned normal. That's the beauty of it. There's nothing- she's not walking around, like, "I am the first lady of the country." She is- she says very clearly, "This is a people's house. I want people to come and my main job is mom in chief." I love that about her.

SAWYER: And yet she is talking about taking- doing something about women's issues worldwide. Helping women take more control of their lives worldwide?

KING: And what she said, there is nothing wrong with asking for help. Everybody needs to ask for help. There's no- it is very difficult for anybody to do it all, including Michelle Obama herself, who has a team. But she is still very hands on. The main thing she wanted to talk to us about, she has very many projects about opening the White House to the people, about hea about healthy eating for family, healthy eating for her own families. She wants to start a garden project just so people enjoy the taste of fresh food and know about fresh food. She's got so many great ideas about what she wants for us, for her family, for the country. I just- it's an amazing time.

SAWYER: Is the clothes thing driving her crazy?

KING: No, you know why? Because she doesn't take it seriously. It's not like she's sitting there thinking, "I'm a fashionista." She wears from Target to black White House to J. Crew to Jason Wu to Maria Pinto to a wide range of designers and she's very comfortable in her own skin. That's why this story about should she cover up? The answer is, no. It's like, there's a song by Maino, a rapper that says, [starts singing], "Hi, hater. You see me." - where people are, I believe- People are laughing. You know the song. People are just jealous, but Michelle- there is no point she is trying to prove. She's comfortable in her own skin and she looks good.

SAWYER: Did you see what Secretary of State Clinton said about her?

SAWYER: Do we have the clip? Let me play it for you.

SECRETARY OF STATE HILLARY CLINTON: Michelle Obama looks fabulous and she has really become in a short period of time someone who many women look to and admire for, not just the way she dresses, although that's very attractive but how she lives her life and it's kind of the whole package of who she is. I tell my daughter that the fashion gene skipped a generation and she inherited it. But, it passed me by.

KING: She only wants to be Michelle Obama, really. And nobody can do it better than she.

SAWYER: And there she is on the cover of O magazine.

KING: I know. Our first time in nine years. It's big for us, Diane.

SAWYER: Out March 17. Thanks Gayle.