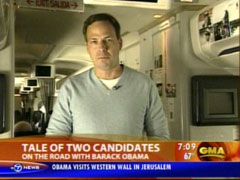 The mainstream media aggressively covered the controversies surrounding Republicans such as Mark Foley and Jack Abramoff and speculated about their connections to President Bush and other high profile members of the GOP. So, it will be interesting to see how tenaciously journalists investigate any linkage between President-elect Barack Obama and scandal ridden Illinois Governor Rod Blagojevich, now under arrest for allegedly trying to sell the selection of Obama's replacement to the Senate.

ABC Senior White House correspondent Jake Tapper [see file photo above] outlined the connections in a post on Political Punch. It seems that in addition to then-state senator Obama endorsing the Illinois governor in 2002 (Blagojevich returned the favor in 2004), Tapper noted that Obama's insistence on Tuesday afternoon that he "had no contact" with the governor's office on his replacement doesn't match previous comments from the incoming administration. According to senior advisor David Axelrod on November 23, 2008, "I know he's talked to the governor and there are a whole range of names many of which have surfaced, and I think he has a fondness for a lot of them." [Emphasis added.]

[UPDATE: During the 6:30pm ET feed of ABC's World News, Tapper appeared on screen and anchor Charles Gibson asked him about the contacts between Blagojevich and Obama's transition office. But the audio failed and, after two attempts to talk to Tapper, the newscast moved on. Maybe it will be corrected in the 7pm ET feed.]

And, it should be pointed out, Mr. Obama has a relationship with Mr. Blagojevich, having not only endorsed Blagojevich in 2002 and 2006, but having served as a top adviser to the Illinois governor in his first 2002 run for the state house.

That 2002 endorsement came at the same time that Axelrod had such serious concerns about whether Blagojevich was ready for governing he refused to work for his one-time client.

Updated by N. Sheppard at 5:52PM: Ben Smith at Politico is reporting that Axelrod misspoke:

An Obama aide, speaking on the condition of anonymity, took back David Axelrod's remark last month that Barack Obama and Rod Blagojevich had spoken recently.

"What the president-elect said today is correct, David Axelrod misspoke," the aide said.

Obama said today the men had not spoken.