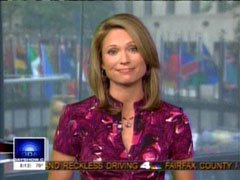 Less than an hour after reporter David Gregory incorrectly huffed on Wednesday's "Today" show that the media have not questioned whether Sarah Palin can balance motherhood with serving as vice president, NBC correspondent Amy Robach explicitly did just that during a segment on how moms were reacting to the Alaska governor. Operating under a loaded either/or premise, she derided, "The broader question if Sarah Palin becomes vice president, will she be shortchanging her kids or will she be shortchanging the country?"

Labeling the segment "the mommy wars," Robach, a former beauty pageant contestant, went on point out that Palin is running despite having an infant child with Down's Syndrome and a pregnant 17-year-old daughter. She asserted that "the news has sparked both pride and condemnation." Robach also featured New York Times writer Jodi Kantor, who authored a piece on the subject in the September 2 edition of the paper. In a clip, Kantor discussed the fact that Palin went back to work only a few days after giving birth this past April. According to the journalist, "fellow mothers" found this "a little bit hard to fathom, a little bit hard to identify with."

Co-host Meredith Vieira deemed it particularly odd that right leaning individuals were standing behind this working mom: "It seems like the conservatives who would probably advocate that moms stay home are backing Governor Palin and a lot of the other working moms are questioning her decision. Interesting twist." For a second segment on the topic, she brought in authors Leslie Morgan Steiner and Megan Basham. 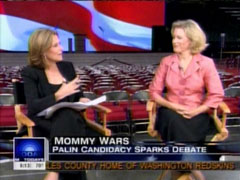 Ms. Steiner continued the GOP bashing. She whined that, for decades, the Republican Party "told us that you can't be a good mom if you work, even though the vast majority of moms in this country have to work. So it's an amazing thing that they are backing this woman who presents such a chaotic and messy and totally real picture of modern motherhood." (In fairness, Steiner did later point out the double standard in that Democratic VP candidate Joe Biden was encouraged to stay in the Senate after becoming a single parent after a tragic accident.)

A transcript of both segments, which aired at 8:09am on September 3, follow:

MEREDITH VIEIRA: And welcome back to St. Paul, Minnesota, site of the Republican National Convention. You know, if there really is a mommy war going on between moms who work and moms who stay at home, then Governor Palin has just been drawn into the battle. Our national correspondent Amy Robach is here with more. Hey, Amy.

SENATOR JOHN MCCAIN: I'm very privileged to introduce to you the next vice president of the United States, Governor Sarah Palin of the great state of Alaska.

ROBACH: No soon had McCain announced his vice presidential pick was from Alaska, did we also know that Sarah Palin would be running for the country's number two office while parenting both an infant son with Down's Syndrome and a 17-year-old pregnant daughter. The news has sparked both pride and condemnation, but not just along party lines, along mommy lines.

UNIDENTIFIED FEMALE: I have to say, seeing her pregnant daughter on the Post today. It was tragic for me to see this child being exposed to the scrutiny. The mother had to know that her kids are going to be put through the wringer.

JODI KANTOR (New York Times writer): I talked to nobody who said women shouldn't run for higher office, mothers shouldn't attempt to become vice-president. The focus was really on this one family, this particular situation.

ROBACH: A particularly sensitive issue among many mothers: Governor Palin's decision to go back to work in April, days after giving birth to a baby with special needs.

ROBACH: What mothers could identify with, that there could be a lot at stake for them. Why do you think this is such an emotional and such a divisive issue for women, for moms when they see this story, when they are deciding what they think about Palin?

UNIDENTIFIED FEMALE #2: 'Cause, I think, you know, if she does come through, she's the role model for all of us, right? To a certain extent and our children. We want someone that, you know, lives up to our expectations and there's a lot at stake.

ROBACH: And this is something a lot of moms struggle with personally, but politically, the question then becomes, will Palin's situation resonate with moms everywhere or create a further divide instead? Meredith, back to you.

VIEIRA: All right. Amy, thank you very much. We're going to bring in two guests now. Leslie Morgan Steiner, the author of "Mommy Wars "and Megan Basham who wrote the book "Beside Every Successful Man," which is being released later this month. Good morning to both of you.

VIEIRA: Leslie, let me begin with you, if I might. You know, this has started- good morning. This has started a whole controversy. New York Times had a front page story, "Mommy Wars: Campaign Edition." But it's interesting where the lines are being drawn. It seems like the conservatives who would probably advocate that moms stay home are backing Governor Palin and a lot of the other working moms are questioning her decision. Interesting twist.

STEINER It's a fascinating chapter in the mommy wars and a fascinating chapter in a completely fascinating political drama . And it is amazing that it's coming out of the Republican Party, which has told us, basically, for decades that you can't be a good mom if you work, even though the vast majority of moms in this country have to work. So it's an amazing thing that they are backing this woman who presents such a chaotic and messy and totally real picture of modern motherhood.

VIEIRA: You know, Laura Bush addressed the issue front and center last night. Let me tell you what she said. She said, "When a woman runs, women are held to some different standard, I think, than men. I think no one would be talking about a man's children and how many other children they have," end quote. And Rudy Giuliani said essentially the same thing to me. Is there a double standard?

STEINER: Oh, there's absolutely a double standard. I mean, you look at Joe Biden. When his wife was killed and he was killed and he was urged to stay in office, despite the fact that his kids didn't have a mom and then you have, you know, many decades later, you have a woman who is being questioned even though she has clearly has demonstrated that she can handle the pressures of having five children and having a very successful political career.

VIEIRA: You know, Megan, when Hillary Rodham Clinton and Geraldine Ferraro, when they both ran, this really wasn't an issue. Now, their children were grown is it because Palin has young children that it has become such an issue with moms out there?

BASHAM: Yes, you know, I think so. I'm hearing it from all mothers. Stay at home moms that I know. Working moms that I know. Everyone's talking about it because this is the reality that they are dealing with in their own lives. And so she became sort of a flashpoint of how will she handle it because they know how messy it is when trying to handle it in their own lives.

VIEIRA: But there's also, I think the part of it is t he particular dynamic of her family, Megan. Her youngest child, down's syndrome and now her oldest daughter is pregnant. And there are some moms out there that are angry, that are saying she has put her family unfairly into the spotlight.

BASHAM: Well, even if they're not angry, I think there is some discomfort with that. I think it's a fair question to ask, because it's hard for -- especially on the conservative side for women, for all this time to have been told that we really uphold this work of motherhood, that it's something only a mother can do, and then to flip it around and say, you're not even allowed to ask. It's inappropriate to even ask her how she's going to make this work.

VIEIRA: I think there's also, Leslie, a nervousness among women out there, because she is going to be a standard bearer. So how she performs as a working mom is going reflect in some way on everyone else. At least that's a concern.

STEINER: Well, and I think that women tend to over-personalize other women's choices about how they juggle work and family. It's something I do 100 times a day. And Sarah Palin is not saying to you or to me or to any other woman out in we have to have five kids and run for vice president of the United States. She's saying that she's doing it. And she has to be treated as an individual. And she's not the only working mom out there, thank God, in this political drama. We've got Michelle Obama. We've have Hillary Clinton. We have many other women. So, the pressure isn't so -- it doesn't have to be so much on her. Whether she does it well or how she does it. It doesn't have to anymore reflect on all women, because, thank God, there are so many other women out there these days. You, me, millions of others of that 80 million moms in America showing that you can combine career and family in all its messy joy.

VIEIRA: And, ultimately, it's how do you it, it's very much a personal decision. There's no one side fits all.

STEINER: It is. Nothing more unique than we do in our lives.