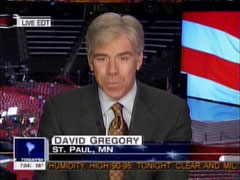 On Wednesday's "Today," NBC reporter David Gregory, against all evidence, suggested that the media have not questioned whether Sarah Palin will be able to balance being both vice president and a mother. Referencing a earlier interview in which McCain surrogate Rudy Giuliani attacked reporters for doing exactly that, Gregory huffed, "That question has not been brought up by the media." "Today" co-host Meredith Vieira parroted, "Exactly."

However, on August 30, "Good Morning America" weekend co-host Bill Weir challenged a McCain spokesman: "Adding to the brutality of a national campaign, the Palin family also has an infant with special needs. What leads you, the Senator, and the Governor to believe that one won't affect the other in the next couple of months?" On August 29, CNN "Newsroom" anchor John Roberts sniffed, "The role of Vice President, it seems to me, would take up an awful lot of her time, and it raises the issue of how much time will she have to dedicate to her newborn child."

Also on August 29, the Washington Post's Sally Quinn whined in a column, "Is she prepared for the all-consuming nature of the job?...Her first priority has to be her children. When the phone rings at three in the morning and one of her children is really sick what choice will she make?" Not only have members of the media discussed this subject, they've done so repeatedly and with great enthusiasm. So, is David Gregory somehow unaware of this fact or was he simply being disingenuous?

The segment which prompted Gregory's inaccuracy was a contentious interview with Rudy Giuliani. During that piece, the former New York mayor ripped into media coverage of Palin. After Vieira complained, "He [McCain] has always been known as a maverick, but also as somebody who can veer towards the reckless side. Some see this as a decision that was made in haste, I.E., reckless," Giuliani let loose on what he saw as sexism:

RUDY GIULIANI: I think that he selected a person who is one of our more distinguished governors. I think the fact that there is a woman on the Republican ticket has got the media in a- in a tizzy and they are asking questions they would never ask if there were a man there, including the question that I mentioned about whether, you know, she's going to have enough time to be- to be vice president and be a mother. Never asked a man that, ever. And I think the language they've pried into her personal life, honestly, my own opinion, it's indecent and disgusting and they should leave her daughter alone.

A transcript of the September 3 segment, which aired at 7:07am, and later Gregory exchange, follow:

MEREDITH VIEIRA: Former New York City Mayor Rudy Giuliani was Senator McCain's rival during the presidential primaries this year and he is scheduled to speak at the convention tonight. Good morning to you, Mr. Mayor. Nice to see you.

RUDY GIULIANI: Good morning, Meredith. How are you?

VIEIRA: Let's- I'm fine, thank you. Let's talk about the vetting process when it comes to Governor Palin. Because there have been so many questions raised. McCain camp says she was thoroughly scrutinized. Washington Post today is reporting that she wasn't, really throughly questioned until the day before she was selected. You've been in politics a long time. Does that sound like a thorough vetting to you?

GIULIANI: Well, how would I know? I mean, you'd have to know what the questions were before they were asked.

VIEIRA: But the day before, selected, is day they sat down with her? That's coming from the McCain camp. That isn't something we invented.

GIULIANI: Well, first of all, it really depends on how many questions she was asked. If you're asking me if what has come out indicates there wasn't a thorough vetting, I'd say, no. Everything that's come out is almost silly. I mean, the whole thing about her daughter should just be off limits in the first place. I mean, that's just absurd for that to be some kind of a major, major issue. Unfortunately --

VIEIRA: Well, I think it only became a major issue because of the way that it came out. It's not so much about the pregnancy.

GIULIANI: What are you supposed to do? Announce it on the day you become the candidate? You're supposed to say, my daughter is pregnant and is she is going to get married. I mean, it's absurd the way that's been painted. This is a non-issue. The idea that -- the question she's been asked, you should find totally offensive. Questions like, can you be a mother and a vice president? Do they ever ask Barack Obama can you be a father and a president?

VIEIRA: What about the questions whether you have enough experience to be vice president?

VIEIRA: And then Senator McCain as well. He has no executive experience.

GIULIANI Senator McCain ran a military unit. I remember the debates when he explained his responsibilities in the military. He's led men in battle. He's had the responsibility of the lives of men in his hands.

VIEIRA: Do you- Let me ask you-

VIEIRA: Mayor, give me an example that has laid it to rest for you, where you have seen her, some executive decision she has made that convinces you she should be a heart beat away from the presidency?

GIULIANI: Going after the sitting governor of Alaska who was a Republican, going after the Republican chairman and throwing him out, taking on corruption head-on. Something I did when I was a United States attorney. I know how tough it is. This woman has got what it takes. She took on corruption in the Republican Party not just in the Democratic Party. She stood up to big oil. She has got accomplishments in her years in office that match the accomplishments that some two-term governors have and sometimes exceeded.

VIEIRA: So, what do you say to the people who are questioning the judgment of McCain in selecting her? He has always been known as a maverick, but also as somebody who can veer towards the reckless side. Some see this as a decision that was made in haste, I.E., reckless.

GIULIANI: I think that he selected a person who is one of our more distinguished governors. I think the fact that there is a woman on the Republican ticket has got the media in a- in a tizzy and they are asking questions they would never ask if there were a man there, including the question that I mentioned about whether, you know, she's going to have enough time to be- to be vice president and be a mother. Never asked a man that, ever. And I think the language they've pried into her personal life, honestly, my own opinion, it's indecent and disgusting and they should leave her daughter alone.

VIEIRA: What does she have to say tonight to quiet the questions around her? What- This is the biggest speech of her lifetime, potentially.

GIULIANI: I'm not going to get to write her speech. If I were giving her speech I'd talk about what she's done as governor, as mayor, how she's taken on big oil and won, two battles and won them. Taken on Republican entrenched politicians who were unethical, or alleged to be unethical, turned that all around. How she's lowered the spending in Alaska by 15 to 20 percent already. I was a mayor, all the tough decisions I made were made in the first year I that I was in office. It's the key to being a good mayor, a good governor, a good president. She made all those tough decisions within the last year, year and a half.

VIEIRA: You're going to be speaking tonight as well. I don't know-- She'll probably get a little more attention, but -- That's okay's she's- she's- she's the vice presidential candidate of our party. My job is to just explain my friendship for John McCain and why I think he should be president of the United States.

GIULIANI: All right. Nice to see you.

DAVID GREGORY: The issue has been for them changing the subject, getting it off the vetting and, frankly, going and taking on the media. Suggesting that it's their opponents in the Democratic Party and the media that are somehow panicked by her.

VIEIRA: Well, that's what Fred Thompson was sort of saying.

GREGORY: And, by the way, I mean, I think it's important to point out, Rudy Giuliani said questions have been asked about whether she can balance this with her kids. That question has not been brought up by the media.