On 'Today,' Matalin Slams 'Hair-on-Fire' Media for Attacks on Palin 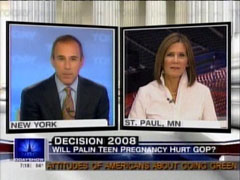 Appearing on Tuesday's "Today" show, Republican strategist Mary Matalin slammed the media for its "hair-on-fire" coverage of Sarah Palin's selection as the Republican vice presidential nominee of John McCain. In particular, she corrected a previous segment by David Gregory which asserted that the Alaska governor had hired an attorney to defend herself against an ethics probe into possible attempts to dismiss a state trooper.

Matalin asserted to host Matt Lauer that it wasn't true "that she's hired a lawyer to deal with this trooper issue. The attorney general, state attorney general hired the lawyer." She forcefully added, "That's what they do for the governor. She's an open book on this thing. The press is reacting to these things in sort of a hair-on-fire way because she's new." In his report, Gregory had incorrectly asserted, that Palin "revealed" she had hired the lawyer.

According to the Anchorage Daily News, Alaska's State Department of Law hired an attorney to represent Palin for charges that she improperly pressured a former public safety commissioner to fire a state trooper who was also Palin's ex-brother-in-law. (This trooper, Mike Wooten, had allegedly made threats against the Palin family.) Public Safety Commissioner Walt Monegan was ultimately dismissed. Unlike Gregory's piece, a story by Kelly O'Donnell in the 7:30 half hour presented the facts correctly.

Tuesday's "Today" repeatedly hit the theme that perhaps Palin is unqualified and that this allegation, along with the news that the 17-year-old daughter of the Alaska governor is pregnant, portend a bad choice on the part of McCain. In a tease for the program, co-host Meredith Vieira fretted, "And did the McCain campaign thoroughly vet its choice for a running mate?" A minute later, Lauer followed up and derided, "Did John McCain thoroughly vet his candidate for the vice president and how will this affect the race for the White House?"

Later, while interviewing Matalin, Lauer again hit his theme: "But do you agree, that is there a lot more that we now know about Sarah Palin and are we going to know a lot more about her, perhaps on the negative side, before this thing is over?" Clearly, it seems as though members of the media are attempting to quickly turn Sarah Palin into the 2008 equivalent of Dan Quayle.

MATT LAUER: Also we're going to talk politics this morning. We're learning that President Bush has rescheduled his speech to the Republican National Convention. He'll do that via satellite from the White House tonight. But all of this comes with this story: Sarah Palin's 17-year-old daughter Bristol being pregnant. Lot of questions now. Did John McCain thoroughly vet his candidate for the vice president and how will this affect the race for the White House? We're going to talk to two Republican strategists about that story.

MEREDITH VIEIRA: And now to politics and the hastily rearranged Republican National Convention. It is back on track today, a day after Hurricane Gustav scuttled day one. Tonight's featured speaker is President Bush. But the big story swirling beneath the surface surrounds John McCain's pick for a running mate and her family drama. NBC's David Gregory is in St. Paul Minnesota with the latest on that. Good morning, David. 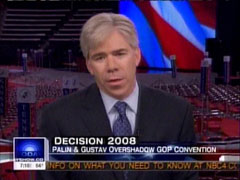 DAVID GREGORY: Good morning, Meredith. Aides say Senator McCain was in fact aware that Governor Palin's 17-year-old daughter was pregnant before he decided to put Governor Palin on the ticket, but this serves as another distraction for the campaign on top of Hurricane Gustav. In Ohio, Senator McCain helped prepare care packages for hurricane victims while his new running mate was forced to unveil uncomfortable family news. Governor Palin's 17-year-old daughter Bristol is five months pregnant. Palin said in a statement her daughter planned to marry the baby's father, 18-year-old Levi Johnston, adding quote, "Our beautiful daughter Bristol came to us with news that as parents we knew would make her grow up faster than we ever planned. We're proud of Bristol's decision to have her baby and even prouder to become grandparents." Palin also revealed she has hired a lawyer in response to a widening ethics probe in Alaska focused on whether she pressured and then fired her public safety commissioner because he refused to remove her brother-in-law, a state trooper.

CHUCK TODD (NBC News political analyst): Because she's so unknown and every new piece of information becomes a bigger impact because we didn't know who she was. Wasn't vetted in the public even if she was vetted by the campaign. There's always this danger of reporters and of voters all wondering, well, what else? What else don't we know?

GREGORY: Asked about Palin's daughter, Senator Obama urged the media to back off the story, saying that his own mother gave birth to him when she was just 18.

SENATOR BARACK OBAMA: I Think people's families are off limits and people's children are especially off limits. This shouldn't be part of our politics.

GREGORY: Questioned about Palin's background dominated day one of the convention, a low-key affair in light of the hurricane. Republican National Committee Chairman Mike Duncan asked delegates to help victims of Gustav

MIKE DUNCAN: I hope each of will you be generous with both your prayers and your pocketbooks.

CINDY MCCAIN: This is a time when we take off our Republican hats and put on our American hats.

GREGORY: Outside the convention hall a much different scene. Police used pepper spray to control thousands of anti-war demonstrator who took to the streets of St. Paul. As we mentioned at the top, the convention is a go for tonight. President Bush will speak to the convention via satellite from the White House. And there will be a focus on John McCain's biography. Senator Fred Thompson and Senator Joe Lieberman will both speak.

LAUER: Real quickly, your husband James Carville said yesterday, quote, "There's a lot of water building against the levee of Sarah Palin." Your husband not one to miss a hurricane metaphor there. But do you agree, that is there a lot more that we now know about Sarah Palin and are we going to know a lot more about her, perhaps on the negative side, before this thing is over?

MATALIN: You know, a lot of the things that are coming out about Sarah Palin are patently untrue as in the previous report that she pressured the commissioner. She did not pressure him. He on the record saying he was not pressured, that she's hired a lawyer to deal with this trooper issue. The attorney general, state attorney general hired the lawyer. That's what they do for the governor. She's an open book on this thing. The press is reacting to these things in sort of a hair-on-fire way because she's new. She's new.

MATALIN: She's fresh. She's young. People like her. And for James- that's James' job to say dumb things about the opposition. When a smart guy says dumb things that means he doesn't have much else to say.

LAUER: Spoken like the wife of a smart guy who says dumb things.

MATALIN: Spoken like the opponent of a guy who's scared of this ticket.

LAUER: Goodbye, Mary. Thanks very much. It was nice talking to you.