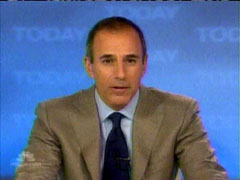 And although many members of the media have resisted pointing out Obama's inexperience, Lauer immediately seized on the subject for Palin and used Quayle-like "heartbeat away" terminology: "We have a 72 year-old nominee of the Republican Party and the vice presidency...This is a position of a heart beat away and how are people going to feel about Sarah Palin in that situation?" NBC political director Chuck Todd replied by asserting how McCain is "rolling the dice on this. He's absolutely gambling."

Continuing the inexperience theme, Todd added, "But I'll tell you, there's going to be a lot of questions about whether somebody who was the mayor of Wasilla, Alaska just three years ago, whether she's ready to be commander-in-chief."

In fairness, Todd at least, pointed out Palin could be seen as a bold pick and mentioned that although Democrats mocked another surprise choice, Dan Quayle, the GOP won that 1988 election.

A transcript of the August 29 segment, which aired at 10:40am, follows:

MATT LAUER: And good morning and welcome to this NBC News special report. I am Matt Lauer and NBC News has just learned that Senator John McCain has picked Alaska Governor Sarah Palin to be his running mate, which is an unexpected choice. She is 44 years-old. She is Alaska's first female governor, its youngest as well. The mother of five has been serving as the governor of that state for the last two years. Elected in 2006, she's described as a staunch conservative. Let's get the latest on this now from NBC's Kelly O'Donnell and, Kelly, a well kept secret.

KELLY O'DONNELL: Incredibly well kept. It's McCain/Palin '08, Matt. And senior advisors told me just a moment ago that the invitation was extended from Senator McCain to the Alaska governor to join him on this ticket. She will be here with him at noon eastern to appear to be unveiled as the new GOP ticket. Obviously, this is a signal to women voters in particular, because the McCain campaign has been trying very hard to attract women voters, not just Hillary Clinton supporters, but that wide, broad group of women voters who are independents, swing voters who might be attracted to a ticket that also has a woman. It is also an attempt to match history. Of course, we know on the Democratic side, the Obama/Biden is set to break a barrier, should he be elected. Well, now, the Republicans can also say they have a barrier to break with Sarah Palin who would be the first woman vice president, if elected. We expect to hear from this team over the next few days. I expect to be riding the Straight Talk bus with Senator McCain and Governor Palin in just a couple of hours. Matt?

LAUER: All right, Kelly. Let me give our viewers just little bit more information on Sarah Palin. Of course, she is a Washington outsider, stalwart conservative as I mentioned on cultural issues. Pro-life. Belongs to a group called Feminists for Life. She opposes gay marriage. She has extraordinary high approval ratings in the state of Alaska, something over 80 percent and she is a former Miss Alaska runner-up. I want to bring Chuck Todd in right now, our political director, who I believe is still out in Denver this morning. But the question a lot of people are going to ask, Chuck, is this: We have a 72 year-old nominee of the Republican Party and the vice presidency. Although vice presidential candidates don't win or lose elections generally, this is a position of a heart beat away and how are people going to feel about Sarah Palin in that situation? 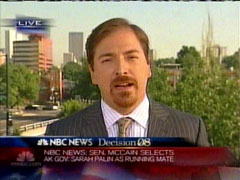 CHUCK TODD: Well, we shall see. This is a real gamble. Look, John McCain is known as somebody who loves to play craps. He really does. He loves to roll the dice. So, use the cliche all you want. He's rolling the dice on this. He's absolutely gambling. Because they believe, on the trajectory they were on, while he was over-performing where a generic Republican should be in this presidential race, they didn't see a path to getting over 51 percent running a traditional race, picking the traditional, conservative, white male governor, say a Mitt Romney or a Tim Pawlenty. That it just wasn't gonna do it, particularly after they saw that show last night that was put on and Obama and the enthusiasm that Democrats have. They've been wanting to match this enthusiasm in some way, and this will do it, potentially. But I'll tell you, there's going to be a lot of questions about whether somebody who was the mayor of Wasilla, Alaska just three years ago, whether she's ready to be commander-in-chief. And just as you brought up, Matt, because of McCain's age that's going to be an issue. But I was talking to Peter Hart, the Democratic half of our NBC/Wall Street Journal poll and he had a word of warning to Democrats. You know, Every 20 years Republicans do a sort of way outside the box pick. In '68, it was Spiro Agnew and Democrats mocked it. And guess what? They lost that election. In '88, former President Bush picked a guy named Dan Quayle, shocking a lot of people. And guess what? Democrats lost. Well, here we are, 20 years later, a pattern obviously McCain would like to see hold. He's gonna pick somebody way outside the box. But, I'll tell ya, they really wanted to pick a woman. There weren't a lot of choices. There were no obvious people. So this gives them a chance to maybe play the wedge, hope that somehow there's a divide-

TODD: -between the Clinton and Obama folks and maybe they will get something out of it.

LAUER: Alright, Chuck. And as Kelly said it is McCain/Palin '08. That does it for us.