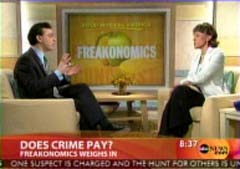 "Freakonomics" co-author Stephen Dubner appeared on Thursday's "Good Morning America" to talk about crime and also to repeat his unsubstantiated argument that legalized abortions have resulted in less crime. The journalist and author asserted, "What happened when Roe V. Wade was handed down was that unwanted children are basically at a much greater risk for being born into the circumstances where they're more likely to lead a criminal life. Not every unwanted child by a long stretch, but typically."

In other words, 35 years after the Roe V. Wade Supreme Court decision, "the generation of people around then included fewer unwanted children and therefore fewer criminals." At no point did Roberts question this assertion or mention that it has been repeatedly challenged since Dubner and his economist co-author Steven Levitt made it in their book. In fact, a study by another economist, John Lott, found that legalized abortion actually increased the murder rate by seven percent. However, unimpeded by contradictory arguments, Dubner simply told Roberts, "It's good to know what forces work in society, if for no other reason than to keep doing the right thing." The right thing, one presumes he means, is to keep aborting children.

Dubner's contention is that the less people born into lower socioeconomic circumstances, the fewer criminals America will have to deal with. However, as John Lott pointed out in both his study and "Freedomnomics," a book written in response to Dubner's, this doesn't appear to be the case.

An August interview with Cybercast News summed up Lott's argument this way:

Lott's study argues that after the high court ruled that states must allow abortion, more permissive sexual behavior and less contraception produced three things: an increase in out-of-wedlock births, a reduction in the number of children placed for adoptions, and fewer married parents.

"Those are contradictory directions," Lott, an economist and senior research scientist at the University of Maryland, told Cybercast News Service. "What ties them together is liberalized abortion rules. It affected decisions on premarital sex and careful contraception. It's a matter of economics. When something seems less costly, there's more of it."

Lott noted there are many good single mothers doing an excellent job rearing their children. But those children almost never get as much attention as children in a two-parent family, he said. Further, children in single-parent families statistically have more social development problems and thus statistically are more likely to be criminals.

During his January 17 GMA appearance, Dubner did make a few arguments that could be described as conservative and rarely seen on network television. (He claimed that gun laws don't work very well.) But when someone makes a statement as incendiary as calling abortion a solution to crime, it behooves those individuals at ABC and "Good Morning America" to feature a counter-balancing position.

For more on this topic, see a November 12, 2007 NewsBusters blog by the MRC's Matthew Balan on the subject.

A transcript of the January 17 segment, which aired at 8:35am, follows:

ROBIN ROBERTS: "Freakonomics" author Stephen Dubner is a master at helping us not only ask questions, but also to question the answers we get from the usual sources. And this morning, Stephen is here to talk about a subject that no one else is talking about and to help us understand why people are no longer talking about. You have our attention. It's good to see you. So, what is this topic that voters or the candidates not talking about?

ROBERTS: People want to know why. And they look at a couple things. Strong economy and the number of police on the street. A factor?

DUBNER: A strong economy or a weak economy doesn't really affect crime a lot. It's a very weak relationship between the economy and crime. Number of police on the street, however, has a big effect. And so, right now, perhaps heading into a recession, people are worried, will crime get worse? The short answer is probably not unless it leads to fewer police.

ROBERTS: And now, that's-- I'm glad you said that. Because, people thinking about a recession and they're thinking, oh, boy, is the crime rate going to go up? Also, when you think about crime, think about those that are in prison and those that are on death row.

DUBNER: Right. Capital punishment, it turns out is not really a deterrent on crime because of the way it's carried out in this country, the long lag and so on. If we were to be the kind of country where capital punishment were carried out the minute after you committed or were convicted of a crime and you killed people on the spot that would change the scenario. But the way it works right now is, it's not a deterrent. Prison, meanwhile, is a huge one. So, there are a lot of reasons to not be happy about the fact that we have more than two million people in prison in this country. But, the number of prisoners has a strong effect on how much crime there is. And the more we put in prison the less crime there is.

DUBNER: No. Not a deterrent.

ROBERTS: How about legalized abortion and aging population? What kind of effect does that have when it comes to the crime rate increasing?

DUBNER: Right. So, years ago, people were thinking that as the country gets older there will be less crime because older people aren't criminals, for the most part. But that shift happens very slowly and does not have a big effect on crime. The legalization of abortion, however, as jarring as this notion is-- What happened when Roe V. Wade was handed down, was that unwanted children are basically at a much greater risk for being born into the circumstances where they're more likely to lead a criminal life. Not every unwanted child by a long stretch, but typically.

DUBNER: And so, you saw that a generation later, the generation of people around then included fewer unwanted children and therefore fewer criminals.

ROBERTS: I want to get to a subject that always makes people a little uncomfortable. Gun laws and wanting to know the effect that that has.

DUBNER: Not anywhere near as much effect on crime as people think or hope.

DUBNER: The reason is this: When you have a regulation, like against guns, when there's a big existing black market working against that regulation, it kind of takes away the effect. In other words, you can make all of the gun laws you want, but if there's a thriving black market, as there is in this country for guns and almost anyone can still get a gun pretty easily, the law is not going to stop much crime. And that's what we found.

ROBERTS: How about the market for drugs?

DUBNER: Drugs is a big one, especially crack. The crack market turned out to be a very violent one. It was a struggle for turf. It was a struggle for profits. And people willing to kill and die for that. Crack has subsided. It hasn't gone away but it's subsided a lot and, therefore, a lot of the violence with it. So, all of these things that we're talking about that made crime fall in the last 20 years, the good news is, none of them seem poised to change greatly in the coming months or years. And therefore, the crime picture continues to look pretty good which is why you're not going to hear about it on the campaign trail.

DUBNER: It's good to know what forces work in society, if for no other reason than to keep doing the right thing.