On ABC, Sawyer Again Dwells on Obama and Race 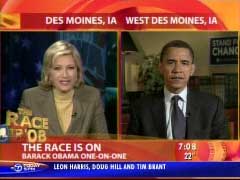 For the second day in a row, and the sixth time in less than a year and a half, a "Good Morning America" anchor speculated on whether Senator Barack Obama can overcome racism in his presidential bid. During a particularly fawning interview on Thursday's program, host Diane Sawyer referenced a quote from the senator on the subject and hypothesized that, in a white state like Iowa, "people have shown they are willing to look beyond race in this country. Has that victory been won, whatever happens tonight?"

On Wednesday, GMA co-host Chris Cuomo posed the same question to fellow Democrat John Edwards. He asked the presidential aspirant about the nature of Iowa voters, theorizing, "When you think people get into the room, do you think race or gender may play an unspoken role in the caucus voting?" Cuomo, back on December 20, 2007, fretted over whether Obama could overcome "America's inherent...racism." Sawyer herself once asked the Illinois senator if America is "secretly...more racist or more sexist"

The GMA anchor's interview on Thursday with Obama contained mostly friendly questions. She even offered a softball for the candidate about whether Hillary Clinton is ripping off his stump material. Sawyer played a clip of Obama on the campaign trail, offering this line: "I know it's cold outside, but I'm fired up! I am ready to go!" She then showed Clinton saying, "And we are fired up and ready to go!" According to the ABC journalist, this is an example of "imitation." Has Sawyer never heard the phrase "fired up" used in a campaign before?

A transcript of the segment, which aired at 7:05am on January 3, follows:

DIANE SAWYER: And now it is the morning. And a few moments ago, we were joined by one of the leading Democratic contenders, Illinois Senator Barack Obama. Senator Obama, good morning to you. 328 days campaigning and 20 hours and one hoarse voice as we calculate it. Is there a bit of relief this morning?

SENATOR BARACK OBAMA: You know, my wife said Happy Caucus Day, so we are excited. It's true, my voice has pretty much left me, but, but I'm thrilled to see how well we're doing.

SAWYER: You spoke of Mrs. Obama and I keep thinking a while back where she said, and I think this is the quote, "If he doesn't win in Iowa, it's just a dream." That this is the key. What, what are you going to feel tomorrow morning if you happen to wake up third?

OBAMA: Well, you know, anything is possible at this point. But we know that we've done a terrific job organizing New Hampshire and in Nevada and in South Carolina and we have more volunteers in the other states than just about anybody. So, obviously, we've put a lot into Iowa and our efforts here. We feel good about what we've done. But this is the beginning and not the end. And so our goal is just to do well tonight. We think we will. But no matter what happens, we'll be well positioned to try to work in New Hampshire and the other states in order to bring home this nomination.

SAWYER: Question about a pretty extraordinary event yesterday. A statement that you made at there quest of the Secretary of State it to the people of Kenya, particularly to President Kibaki of the Kikuyu tribe there, to try and do something about the violence. 300 have people died, 100,000 now misplaced because of the turmoil there. Here's the question, if you were the president, at this moment, would you do more. Would you send in troops to stop that violence?

OBAMA: Well, I don't think we're at that stage yet. Obviously, at this point, we're monitoring the situation. We're concerned about it. I want to make sure that people step back from the brink of chaos and violence and try to work through what has been a controversial and troublesome election in a way that maintains peace and that is ultimately good for the people of Kenya. And we'll watch to see whether it has any impact or not. But I thought it was something that I needed to take the time out to do if it might prevent some further violence down the road.

SAWYER: Another headline in the news this morning came out of Chicago and a statement you made to the Chicago paper, that you think what has happened so far, particularly in the state of Iowa where it's 92 percent white, that people have shown they are willing to look beyond race in this country. Has that victory been won, whatever happens tonight?

OBAMA: You know, I think it has shown that the American people have made enormous progress. And I feel really good about that. I think the Iowa people feel good about it. We have a long way to go. But there's no doubt that for me to be in this situation, competitive with some great Democratic candidates on caucus morning, is an achievement. And my hope is that we end up doing well here, but I've already seen that urgency in the faces of the people in Iowa and, you know, I think whoever's the next president has to address that because the American people are ready to be led.

SAWYER: Well, as we leave you, Senator, if imitation is the sincerest form of flattery, we noticed something interesting. You've really been flattered. Because someone else on the campaign trail seems to have picked up a line that was really an applause-getting line for you out in the campaign events. I want to play them both for you here. Let's listen for a second.

OBAMA: I know it's cold outside, but I'm fired up. I am ready to go.

SENATOR HILLARY CLINTON: And we are fired up and we are ready to go.

SAWYER: So Senator Clinton there. What do you think?

OBAMA: Well, I'm glad she's fired up. And I'm glad he's ready to go. I want everybody in the country to be fired up and ready to go for change. So, you know, I want everybody on the change bandwagon right now. The people of Iowa will determine tonight who's best equipped to bring about the changes that are needed.

SAWYER: Senator Obama, thanks so much. Good luck to you and everyone who's worked so long and hard on the campaign trail. Thank you.

OBAMA: Thank you, Diane. I really appreciate it.