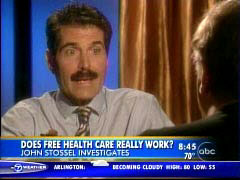 On Friday’s "Good Morning America," token conservative reporter John Stossel told portly filmmaker Michael Moore, "Forgive me. More of us look like you" and that obesity explains why Canadians live longer than Americans, not universal health care. Stossel appeared on the morning show to promote his program debunking the myth of "free," government-run health care. His "20/20" special, which will air September 14 on ABC, includes a quarrel with the left-wing director.

Stossel’s appearance on GMA, and his conservative take, also strongly contrasts with the morning show’s own coverage of government controlled health care. In June, Moore appeared on the program to promote "Sicko," his movie bashing the United States system of private care. Back then, GMA co-host Chris Cuomo mildly questioned the filmmaker’s trip to Cuba to lavish praise on the communist country’s health system. After the director noisily objected to this offense, Cuomo backed down, saying, "Look, I like the stunt."

Another example that demonstrates the difference between Stossel’s take and the usual liberal spin provided by "Good Morning America" is the case of Karen Jepp. The "20/20" host explained, "Government rationing in Canada is why, when Karen Jepp was about to give birth to quadruplets last month, she was told all the neo-natal units she could go to in Canada were too crowded. She flew to Montana to have the babies." And yet, as noted on NewsBusters, GMA covered this exact story in August and the show's hosts never managed to explain why the Canadian hospitals were too crowded.

ABC and "20/20" should certainly be applauded for airing a non-liberal take on universal health care. In the special, Stossel will make points rarely heard on network television, such as noting that Canadians wait an average of 17 weeks for treatment, that one town in that country has "a lottery just to get an appointment with a family doctor." However, it would also be nice if John Stossel wasn’t such a lonely voice in providing a different perspective on this (and other subjects).

Perhaps conservatives shouldn’t be too optimistic about such a change. On Friday, Cuomo teased the contrarian segment by wondering, "Is free health care really the best health care?" As John Stossel will demonstrate on Friday night, calling it "free" health care, doesn’t make it so.

A transcript of the September 14 segment, which aired at 8:43am, follows:

Diane Sawyer: "As we know, it's one of the single most important decisions Americans have to make: What should the health care in this country be? Can it be made better? Is government health care the answer? ‘20/20's’ John Stossel has been asking that question and a lot more in tonight’s special hour ‘Whose Body is it Anyway? Sick in America.’ John looked at other countries' health care systems to see if they have better ideas. And he’s here to tell us some of what he found. John?"

John Stossel: "And a lot of Americans say government care is the answer, that health care in countries like France, Germany, Britain, Canada is great because it's free. Government pays and no one has to worry because free is great, right? But not so fast. It's why the British National Health Service made news by promising it would reduce wait times for hospital care to fewer than 18 weeks. But that's still more than four months. These people are waiting for a dentist appointment. Waits are so long, some people do it themselves. [Picture of a man with a missing tooth.] He used super glue. People pull their own teeth. Dental tools? Pliers and vodka. Government rationing in Canada is why, when Karen Jepp was about to give birth to quadruplets last month she was told all the neo-natal units she could go to in Canada were too crowded. She flew to Montana to have the babies."

David Gratzer (author, "The Cure: How Capitalism Can Save American Health Care"): "People line up for care. Some of them die. That's what happens."

Stossel: "Canadian doctor David Gratzer, author of "The Cure," thought the Canadian system was great until he started treating patients."

Gratzer: "The more time I spent in the Canadian system, the more time I came across people waiting for radiation therapy, waiting for the knee replacement so they could finally walk up to the second floor of their house."

Stossel: "But fans of Canada's system, like Michael Moore, point to the fact that Canadians live longer. Isn't that proof that the Canadian system is better, even if they have to wait in line?"

Stossel: "But Canadians live longer because of things unrelated to health care. Americans are three times as likely to die in car accidents and ten times as likely to be murdered. Take those factors into account, not to mention obesity, and Americans live longer than Canadians. In America, we kill each other more often. We shoot each other. We have more car accidents. Forgive me. More of us look like you."

Stossel: "That's the reason they're living longer in Canada."

Moore: "I will say, in part, it's because they never have to worry about paying to go see the doctor."

Stossel: "They may not worry about paying to see a doctor, but they do have to wait on average 17 weeks to see a specialist. We found one town in Canada where they have a lottery just to get an appointment with a family doctor. But you can be seen within 24 hours if you meow or woof, because if you're a dog or cat, vet care is privately run."