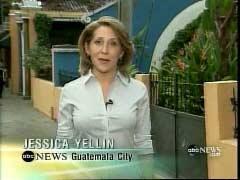 On Monday’s "Nightline," the ABC program continued the media’s fascination with the Mayan "spiritual leaders" who protested a recent visit to Guatemala by President Bush. According to anchor Cynthia McFadden, "some say he's angered the gods."

While footage onscreen showed Uruguayan demonstrators (from a previous portion of the trip) burning an American flag, Reporter Jessica Yellin noted that "many in the region don’t care for Mr. Bush" and seriously reported on the President’s "bad vibes":

JESSICA YELLIN: "The spiritual leaders of the Guatemala's indigenous Mayan population are also worried about the President's bad vibes. They will perform a special cleansing ceremony to clear away the bad energy they say he left during his visit." 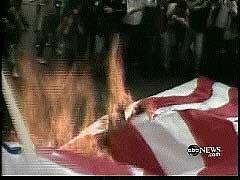 Did it ever occur to these people that the protesters might not like America? While it may be hard for liberal reporters to resist covering a story about the evil spirts George Bush creates, burning an American flag is an insult to an entire country, not just one leader.

The transcript of the segment, which aired at 11:57pm on March 13, follows:

CYNTHIA MCFADDEN: "Tonight, President Bush is on his way to Mexico. On this Latin American tour, he's been met by protest every step of the way. But nowhere has he seen a response quite like the one he received in Guatemala, where some say he's angered the gods. ABC's Jessica Yellin sees a 'Sign of the Times.’"

JESSICA YELLIN: "Ever the ‘ranchero’, President Bush loaded lettuce in Guatemala on day five of his Latin America goodwill tour. It's meant to show he cares. But many in the region don't care for Mr. Bush. [Onscreen: footage of protesters, including some who are burning an American flag.] Like these folks who gave him a chilly reception on his first stop in Brazil. On day two in Uruguay. And Columbia, and today, Guatemala. The protesters object to everything from the war in Iraq to the President's free trade and immigration policies. The hostility isn't just coming from the street protests. The spiritual leaders of the Guatemala's indigenous Mayan population are also worried about the President's bad vibes. They will perform a special cleansing ceremony to clear away the bad energy they say he left during his visit. Guatemala's president took Mr. And Mrs. Bush to one of the country's top tourist spots, Iximche, the ruins of an ancient city where they took in some Mayan culture, including traditional music and dancers wearing deer skins. There was also some sort of Mayan soccer game, and this famously athletic president couldn't help from jumping in. But indigenous leaders fumed saying their culture shouldn't be a tourist attraction. One Mayan said Mr. Bush was trampling on sacred ground. But none of the Bush bashing seemed to bother the President who focused on the friendly faces."

PRESIDENT GEORGE W. BUSH: "As a matter of fact, it was one of great experiences on my presidency."

YELLIN: "Though some are eager to see him go and take his karma with him. I'm Jessica Yellin for 'Nightline" in Guatemala City."

It should be noted that "Nightline" is only the latest media outlet to gleefully play up this story. "Good Morning America," as well as NBC’s "Today" show, and the AP have also commented on President Bush and his "evil spirits."