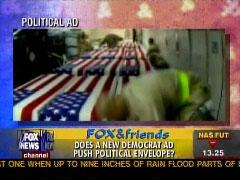 Quiz time: When is a political ad that features pictures of deceased, flag-draped American heroes controversial? Apparently, the answer is only when Republicans produce such a commercial. The Democratic Campaign Committee has posted a 60 second spot on their Web site, and it shows images of the coffins of American military personnel, as well as a soldier standing in front of a makeshift grave marker. (Update, 5:40pm EDT July 14: The ad has now disappeared from the DCCC Web site, replaced by one calling for a hike in the minimum wage.)

But, oh, what a difference a Party makes. During the 2004 presidential election campaign, the Bush campaign ran a commercial that included a very brief shot of an image of a flag-draped stretcher being carried from the rubble of the World Trade Center. Back then, the media showed no restraint.

As reported in the March 5, 2004 CyberAlert, the networks pounced on the story. On March 4, 2004, The Early Show’s Harry Smith offered this assessment to Bush representative Karen Hughes:

Smith: "But you know this is one of those things where images can make or break a candidate. Could this turn into another 'Mission Accomplished?’"

Over on the same day’s Good Morning America, Kate Snow introduced a segment on the controversy by saying the following:

"Using these 9/11 images is already drawing political fire from Senator John Kerry and outrage among some victims' families; 'a slap in the face,' says one widow, 'of the murders of 3,000 people.'"

Brent Baker, in his CyberAlert, discussed how the Today show seemed interested only in 9/11 families who found the use of images that included 9/11 dead offensive:

"...But Couric, like the other morning hosts, ignored the quotes in the New York Daily News from 9-11 victim family members who found the ads perfectly fine and quoted only from those who attacked the Bush campaign: ‘One September 11th widow told the Daily News this morning she was offended by the use of 9-11 images in these ads saying quote, 'After three thousand people were murdered on his watch it seems to me that takes an awful lot of audacity. Honestly, it's in poor taste.' What's your response to that?’"

There was additional network outrage, including a episode closing commentary by Ted Koppel on the April 23, 2004 edition of Nightline.

But after the Democrats created an spot that tries to capitalize on the deaths of American soldiers in Iraq, these same networks have so far found no time to interview those offended or challenge Democratic Party leaders.

Unlike the broadcast networks, FNC’s Fox and Friends, however, did cover the story. In a segment that aired at 8:16am EDT on Thursday, co-host Brian Kilmeade wondered, "Are Democrats exploiting our fallen soldiers for political gain?" A few minutes later, E.D. Hill made this point:

Hill: "Well, the ad is called ‘A New Direction for America.’ You would surmise from watching this that if Democrats were in charge, there would be no flag draped coffins. Yet when they had the opportunity to vote on, uh, setting up a time line for withdrawal from Iraq, from the war, they, by a vast majority, voted against it. So it doesn't seem particularly on course with what the actions that they're taking themselves."

An interesting point, one that the networks could have posed to a representative from the DCCC, if they only took the time to cover the story.