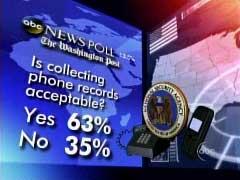 Did USA Today skew their poll results of the NSA phone collection scandal? It sure looks that way. As Brent Baker has already reported, On May 12, ABC News and The Washington Post conducted a poll to find out whether Americans support the NSA’s collection of phone call records. They asked this question:

"It's been reported that the National Security Agency has been collecting the phone call records of tens of millions of Americans. It then analyzes calling patterns in an effort to identify possible terrorism suspects, without listening to or recording the conversations. Would you consider this an acceptable or unacceptable way for the federal government to investigate terrorism? Do you feel that way strongly or somewhat?" 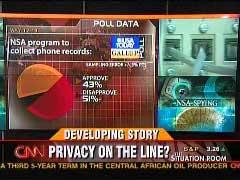 63 percent either somewhat or strongly supported the plan. USA Today, in a poll published on May 15, found that 51 percent opposed the program. They phrased the two pertinent questions this way:

"As you may know, as part of its efforts to investigate terrorism, a federal government agency obtained records from three of the largest U.S. telephone companies in order to create a database of billions of telephone numbers dialed by Americans. How closely have you been following the news about this?...Based on what you have heard or read about this program to collect phone records, would you say you approve or disapprove of this government program?"

Note the difference? The ABC/Washington Post poll stated that the NSA collected phone records, but didn’t listen to them. USA Today did not mention this fact until question number ten. And even then, it was only as a hypothetical to ask how worried Americans are that the government will listen to their conversations.

Is it fair to say that USA Today, which "broke" this story, has a vested interest in seeing it portrayed as monumentally important? (Although, as Rich Noyes pointed out, much of this key information was already reported by the New York Times on December 24, 2005.) Look at the way USA Today reporter Susan Page framed the very first sentence of her front-page article on the poll results:

"A majority of Americans disapprove of a massive Pentagon database containing the records of billions of phone calls made by ordinary citizens, according to a USA TODAY/Gallup Poll. About two-thirds are concerned that the program may signal other, not-yet-disclosed efforts to gather information on the general public."

USA Today, by ignoring the fact no phone calls were listened to, was able to find a majority opposition to the NSA program. But here’s what the poll also found: 34 percent of Americans believe the Bush administration has been about right when it comes to balancing civil liberties with the war on terror. 19 percent believe they haven’t gone far enough. So 53 percent of the public either approves or wants the government to go further. This statistic, somehow, didn’t make it into the article.

The paper followed up the question of whether one supports the program with this loaded query:

USA Today vaguely explained away the difference between the two findings this way:

"The findings differ from an ABC News/Washington Post poll taken Thursday night of 502 adults. In that survey, 63% called the program an acceptable way to investigate terrorism. The findings may differ because questions in the two polls were worded differently."

Credit Ms. Page with quite the understatement. Predictably, the mainstream media reported the new poll as evidence that America now opposed the NSA program. On the May 14 edition of the Today show, at 8:11AM EDT, Campbell Brown asked Chris Matthews about the discrepancy behind the two findings:

Matthews: "In this case, I think a couple days of talking about it, people said wait a minute, I don't like the idea that somebody's got a list of my phone calls. I may be making phone calls I don't want everyone to know about. Privacy issues come into factor, I think, after a couple days and I think people began to think about it and didn't like it."

That could be it. But more likely, it’s a case of the media simply reporting a story the way they want it to be.